Cell Reports. CNIO researchers help to decipher the structure of the large molecular machine that assembles and activates mTOR 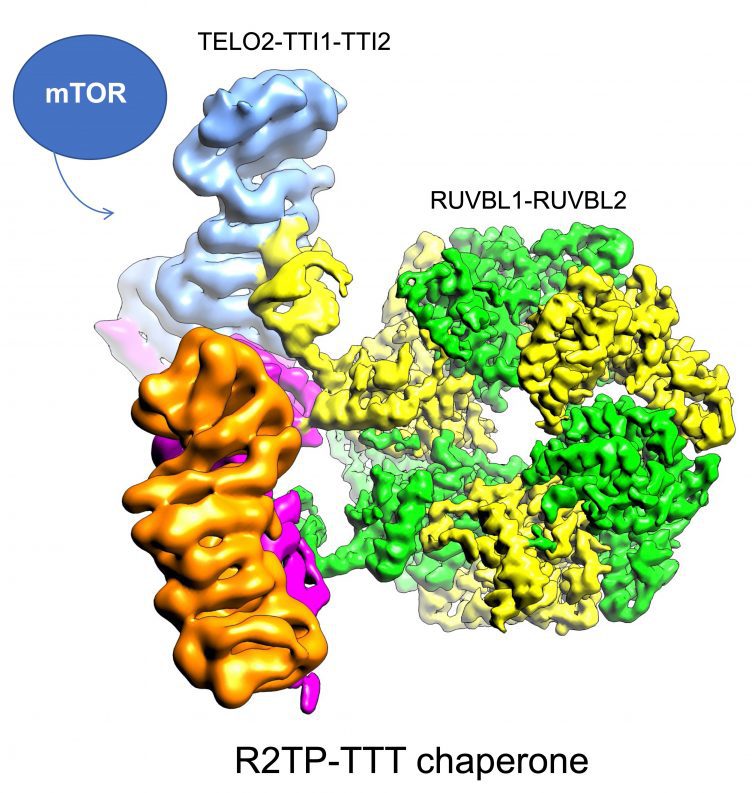 Structure of the TELO2-TTI1-TTI2 proteins determined in the article, together with the rest of the proteins that form the complex that manages the assembly of mTOR /CNIO

The mTOR protein assembles as part of a large macromolecular complex involved in cancer and nutrition, ageing and other essential processes in the body

“As our understanding of the mechanisms that control mTOR grows, new possibilities are opening up to interfere with these processes for therapeutic purposes,” says Óscar Llorca, co-author of the study

The principle that form follows function does not only apply to design and architecture. It also applies to biology. Every organism is a universe that lives thanks to the activities of tens of thousands of nanomachines, whose functions depend on their forms. Biologists say macromolecular complexes instead of nanomachines and structure instead of form, but the idea is the same: know the form and you will understand the function. Now, a group at the Spanish National Cancer Research Centre (CNIO) has helped determine the structure of a nanomachine essential for the functioning of another, mTOR, which plays fundamental roles in cancer and nutrition, ageing and other vital processes in the body.

The study, published in the journal Cell Reports, was carried out by the groups of Laurence H. Pearl and Chrisostomos Prodromou from the Genome Damage and Stability Centre at the University of Sussex (UK), in collaboration with Óscar Llorca, Director of the Structural Biology Programme and Head of the Macromolecular Complexes in DNA Damage Response Group at the CNIO.

The golden age of structures

The finding comes in the middle of the golden age of structural biology. Researchers speak of the structural revolution:  in recent years, the shape of an increasing number of molecular nanomachines has been solved, at a much faster rate than was typical a decade ago. The change is due to high-resolution cryo-electron microscopy, a technique that has made spectacular progress and now allows proteins to be visualised in atomic detail.

Knowing the structure of proteins helps in the search for new drugs. Proteins interact by fitting together, as in a tiny three-dimensional jigsaw puzzle; knowing the shape of one piece allows us to try to design another one that matches it and blocks it, thereby inhibiting it.

The importance of understanding how mTOR works

The mTOR protein acts as a sensor that alerts the cell to the presence of nutrients. Since its discovery in the 1990s, it has been observed to be involved in a wide range of pathologies, including cancer, diabetes and neurodegenerative diseases. It is estimated that at least 60% of tumours show some form of modification in mTOR or proteins that interact with it.

It is, therefore, crucial to understand in detail how it works. But mTOR is not a protein that works alone: it is part of a macromolecular complex, a cluster of several proteins that join to work together like the parts of a complex (nano-) machine. As Llorca explains, “mTOR alone does nothing; it is part of a giant structure that contains other proteins, which allows it to behave in a complex way.”

An assembly line of proteins

As with many other large macromolecular structures, the construction of the mTOR complex needs the help of other nanomachines that, “like an assembly line, add and assemble the elements of the final large structure,” explains Llorca.  If this large structure is not assembled, “mTOR is not able to decide whether the cells should grow or not.”

The functioning of the proteins that make up this mTOR assembly army is not yet well understood.

The study carried out by Mohinder Pal, a researcher of the Pearl and Prodromou groups at the University of Sussex (UK) in collaboration with Llorca, helps to shed further light on this by determining the structure of part of the assembly machinery and the mechanisms by which it can recognise and manipulate mTOR.

The significance of the result is not merely fundamental. As Llorca points out, “as our understanding of the mechanisms that control mTOR grows, new possibilities are opening up to interfere with these processes for therapeutic purposes.”

This work was supported by the Spanish Ministry of Science and Innovation, the National Institute of Health Carlos III, the Welcome Trust, the European Regional Development Fund, the Biotechnology and Biological Sciences Research Council (BBSRC) and the Community of Madrid.