Home | News | WISE | Jane Goodall: “When I was 10 years old and I said I wanted to go to Africa and write books about animals, everybody laughed at me. Girls couldn’t dream of doing that”

Jane Goodall: “When I was 10 years old and I said I wanted to go to Africa and write books about animals, everybody laughed at me. Girls couldn’t dream of doing that” 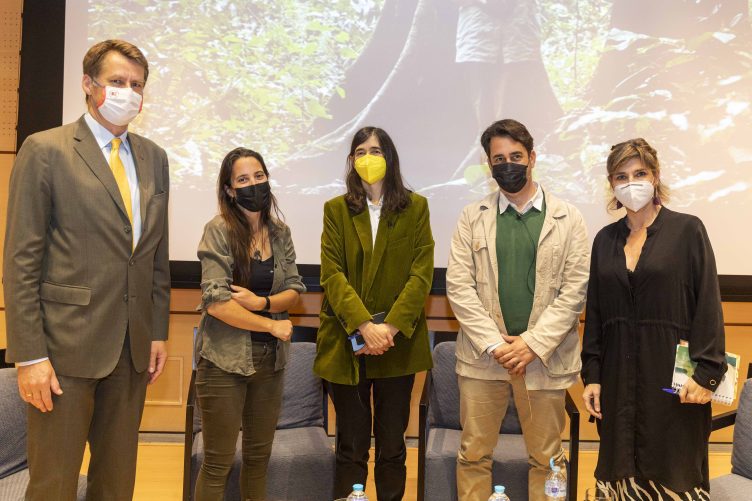 Famed British ethologist Jane Goodall participated in CNIO’s (Spanish National Cancer Research Center) celebratory event marking International Women’s Day at the British Embassy in Spain
Jane Goodall, via live telecast, talked about the prejudice she has had to face as a woman: “When I was 10 years old and I said I wanted to go to Africa and write books about animals, everybody laughed at me. Girls couldn’t dream of doing that in those days”
Goodall was the eighth person in the history of Cambridge University to complete her doctorate without a previous university degree
Jane Goodall: “My best advice for young women today is what my mother told me: work hard, take advantage of opportunities and, as long as you don’t give up, you’ll be on the right path”
The event, organised by the Jane Goodall Institute in Spain, was attended by CNIO Director Maria A. Blasco; British Ambassador to Spain, Hugh Elliott; Director of the Jane Goodall Institute (JGI) in Spain and Senegal, Federico Bogdanowicz; Director of JGI in the Republic of Congo, Rebeca Atencia; and scientist and Coordinator of the CNIO Women’s Office, Isabel López de Silanes

“When I was 10 years old and I said I wanted to go to Africa and write books about animals, everybody laughed at me. Little girls didn’t do things like that in those days.” With these words, Jane Goodall opened the morning with the emotional story of her difficult journey towards becoming a scientist. The British primatologist, known today for having overcome the odds by tenaciously following her passion, serves as an example for women and girls pursuing careers in research. This year, Goodall was the keynote speaker for CNIO’s (Spanish National Cancer Research Center) International Women’s Day event at the British Embassy in Spain, organised in collaboration with the Spanish branch of the Jane Goodall Institute.

The event was also attended by CNIO Director, Maria A. Blasco; British Ambassador to Spain, Hugh Elliot; Director of the Jane Goodall Institute (JGI) in Spain and Senegal, Federico Bogdanowicz; Director of the JGI in the Republic of Congo, Rebeca Atencia; and scientist and Coordinator of the CNIO Women’s Office, Isabel López de Silanes. Over the course of the day, a panel was held, examining the groundbreaking life of this British primatologist, moderated by journalist Lula Gómez.

As Maria A. Blasco, Director of CNIO, pointed out, “Jane Goodall has a been an exemplary female scientist who has inspired so many of us women and girls.” From a different perspective, Rebeca Atencia highlighted “the importance of individual actions in creating a global impact”: “We have to think about our actions both on the consumer level as well as in terms of how we can inspire others to effect change,” she explained.

Federico Bogdanowicz also touched upon the idea that, “The vital example of Jane Goodall as a pioneering female scientist and tireless environmental activist has been and continues to be a source of inspiration for millions of women and men worldwide, for people of all ages, people willing to work hard to realise their dreams and make this world a better place.” He continued, “This is what we humbly set out to do at the Jane Goodall Institute in Spain and Africa.”

British Ambassador to Spain, Hugh Elliott, commented, “I am very proud to be able to celebrate International Women’s Day by taking inspiration from Jane Goodall. She is not only one of the world’s leading scientists, but she is also an example of a very talented woman, whose life is driven by her passion and efforts. Through her life and work, Dr. Goodall has inspired us to fight for the preservation of different species, local communities, and the environment. Now more than ever, in the current geopolitical context, we need talented figures like her, driven by values such as solidarity, innovation, passion, and determination, willing to fight and work for what they believe in.”

Scientist and Coordinator of the CNIO Women’s Office, Isabel López de Silanes, also noted that, “As a scientist, Dr. Goodall serves as a role model for all of us who work in the field of science.” She further added, “As a woman, she has used her passion and gentleness to spread her message across borders and speak to the entire world.”

Likewise, Ambassador Hugh Elliott shared a few words about the war in Ukraine: “I don’t want to pass up the opportunity to reflect on the terrible war that is destroying the lives of women, children and men in Ukraine. I condemn the brutal invasion of this European country by the Russian government and its premeditated, unjustified and illegal attack on the Ukrainian people. Over the past several days we have witnessed how the Ukrainians are suffering the horror of war. We’ve seen how so many women have had to take their children and flee from their country in order to escape this terrible situation which is tearing families apart, and I would like to express my full support and solidarity.”

Jane Goodall: “Madame Curie was the only role model that we learned about in school”

During her speech, Jane Goodall recalled the situation she faced at the beginning of her life: “I have lived on this planet for almost 90 years and have seen many changes for women in science. When I was young, there were very few female role models for girls in the field of science. Madame Curie was the most famous and was the only one we learned about in school.”

“I think that ever since I was born, I have been fascinated by animals and their behaviour,” she continued. “I spent hours observing birds, insects and squirrels in our garden in England. Fortunately, I had a mother who supported me very much.” She began her education as a “young scientist” at the age of four in her family’s chicken coop. “Curiosity, asking questions, not getting the right answer, deciding to figure it out on my own, making mistakes, not giving up, having the patience to learn – it was all there. A less encouraging mother could have crushed my sense of scientific curiosity,” Goodall warns.

“When I was 10 and I said to everyone that when I grew up, I wanted to go to Africa, live with wild animals and write books about them, everybody laughed at me. Little girls didn’t do things like that in those days. How will you do that, they asked me. Africa is really far away, it’s dangerous and you’re just a girl. But my mother told me, “No, if you really want to do something like that, you need to take advantage of opportunities. Work hard and, as long as you don’t give up, you’ll find the way.” This is the same piece of advice that Jane Goodall would now like to pass on to the young women of today, as she stated in her speech.

Years later, without a university degree and thanks to the support of renowned paleo-anthropologist, Louis Leakey, that little girl who was so fascinated by animals succeeded in realising her dream and eventually obtaining the funding needed to carry out her research.

“When I began to publish my findings, most scientists said: ‘Why should we believe her? She’s just a girl. She didn’t even go to university. They only support her because she has nice legs and they can use her as a cover girl.’ But Louis Leakey decided that I had to get a degree so that other scientists would take me seriously. So, he arranged for me to be a doctoral student at Cambridge University, and I became the eighth person in the history of that university to complete a doctorate without a university degree.”

Over time, Goodall was eventually accepted by the scientific community and now, more than 60 years later, her team still carries on the legacy of her studies, according to Goodall herself. “Every one of us makes a difference every day, and we can choose what kind of difference we’re going to make,” says the primatologist. As a final piece of advice to young scientists, she states, “If you have a passion, if you have a dream, follow it through to the very end. And eventually it will become reality.”

The Spanish National Cancer Research Center (CNIO) is an institution dedicated to research, diagnostics and the treatment of cancer. Among one of the first 10 centres in the world to focus solely on cancer research, in 2020 the organisation was awarded the Severo Ochoa Center of Excellence Accreditation for the third time in a row.

About the Jane Goodall Institute in Spain

The Jane Goodall Institute in Spain, a non-profit founded in 2007, carries out environmental and educational projects and campaigns in Spain and is responsible for research, conservation, sustainable development and climate-change programmes in Senegal. It also supports the Tchimpounga Sanctuary, Africa’s largest chimpanzee rescue centre. The JGI Spain is parts of a global network of 30 offices founded by Dr. Jane Goodall (www.janegoodall.es).