To date there are no predictive biomarkers for metastatic renal cancer

The authors of this study propose a model predictive of TKI response, a type of anti-angiogenic agents employed to treat this cancer 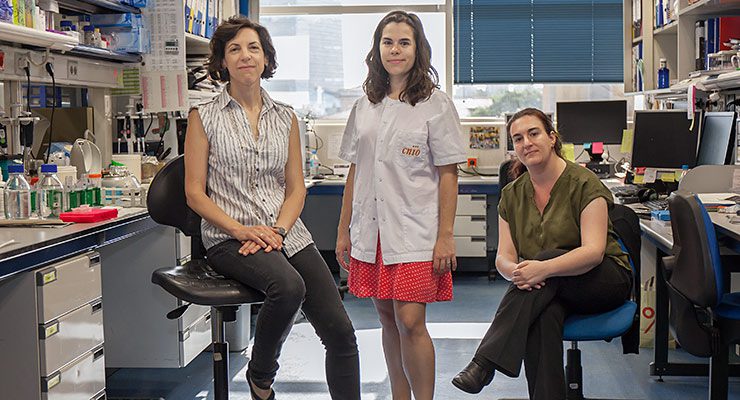 A team of CNIO researchers, in collaboration with the Spanish Oncology Genitourinary Group (SOGUG) and the University Hospitals Leuven (Belgium), has discovered various potential biomarkers predictive of tyrosine kinase inhibitors (TKIs) response in metastatic renal cancer. In their study, published in JCI Insight, the researchers identify various miRNAs that define a group of patients refractory to TKI treatment -a type of anti-angiogenic agent widely used to treat renal cell carcinoma- and with poor prognosis. The study, conducted on 139 patient samples, is the most robust to date in this tumour type.

Finding biomarkers that can help determine a patient’s prognosis, the risk of recurrence or, as in this case, their sensitivity to various drugs will improve personalised treatment for these patients.

Although there are dozens of biomarkers predicting drug response in cancer, there are none for metastatic renal cell carcinoma, nor for its standard therapy; anti-angiogenic agents, which have doubled the median overall survival of patients since their approval a decade ago.

However, not all patients show a positive response. “There is a group of patients who are refractory to this therapy,” explains Cristina Rodríguez-Antona, from the Hereditary Endocrine Cancer Group at the CNIO. “This implies that the tumour will continue to grow in the presence of TKIs”. At present, there is no way of knowing how each patient will respond but “if we could know it in advance, we could apply the most appropriate treatment”, stressed the researcher.

Immersed in the search for biomarkers, this team considered that the miRNAs would be good candidates. These small molecules act as regulators in several biological processes –programmed cell death, proliferation and differentiation, for example- and they are also very stable, which facilitates their preservation in tissue samples.

As a first approach, the authors performed deep sequencing of the miRNAs in samples from 74 patients treated with TKIs. Of these, 16 (22%) already showed disease progression in the first control, while in 58 (78%) the tumour presented complete or partial responses to treatment or disease stabilisation.

After several analyses and adjustments, of the 65 miRNAs whose expression was significantly different in the early progressive tumours compared to the stable ones, six appeared to be “easily detectable biomarkers” and were selected for an independent validation. Five of them remained associated with a poor response to the TKIs and appeared to be independent of patient prognosis.

“The next-generation sequencing has allowed us to detect all the miRNAs in quite a large cohort [of patients],” says Rodríguez-Antona. “To date -she explains- other studies used small series and less robust techniques and, therefore, the results were limited.”

In order to strengthen this first finding, the authors generated a predictive model in a group of 132 patients. First, they considered the five differentially expressed miRNAs, in addition to other clinical characteristics (prognostic group, age, sex…) and, after several analyses, they identified a model based on two miRNAs that showed “higher accuracy than any clinical factor tested”, regarding the prediction of how the tumour would respond to TKI-based treatments.

With the arrival of novel drugs and the different responses displayed by patients, “we are going to need biomarkers to guide treatment selection,” says Rodríguez-Antona. This paper shows that miRNAs are good predictive markers of the response to TKIs. Although researchers point out that “these results will have to be validated in other patient series before using them to personalise treatments for metastatic renal cancer”.

This research project has been funded by Mutua Madrileña Foundation, Pfizer, the Fund for Health Research Project and the Spanish Ministry of Economy and Competitiveness.