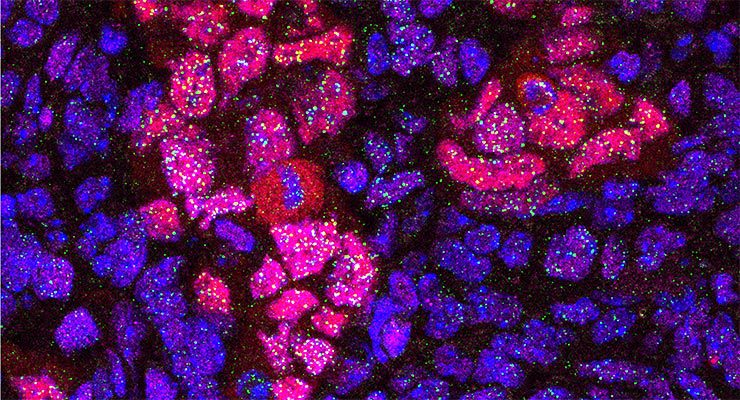 During the ‘in vivo’ reprogramming process, cellular telomeres are extended due to an increase in endogenous telomerase. This is the main conclusion of a paper published in ‘Stem Cell Reports‘ by a team from the Spanish National Cancer Research Centre (CNIO). Their observations show, for the first time, that the reprogramming of living tissue results in telomerase activation and telomere elongation; thus reversing one of the hallmarks of aging: ‘the presence of short telomeres’.

“We have found that when you induce cell dedifferentiation in an adult organism, the telomeres become longer, which is consistent with cellular rejuvenation”, explains María A. Blasco, head of the CNIO Telomeres and Telomerase Group and leader of this research. This lengthening of the telomeres is an unequivocal sign of cell rejuvenation, which has been quantified for the first time here in a living organism.

Blasco and her colleagues have worked with the so-called “reprogrammable mice” –created by Manuel Serrano, also a CNIO researcher, whose group is also involved in this project. Broadly speaking, the cells of these transgenic animals carry the four Yamanaka factors (OSKM) whose expression is turned on when an antibiotic is administered. In doing so, the cells regress to an embryonic-like state, a condition known as known as pluripotency.

In light of the importance of telomeres in tissue regeneration, ageing and cancer, the authors decided to analyse the changes that occur in these protective structures of the chromosomes during the ‘in vivo’ reprogramming process, which leads to dedifferentiation of the tissues. Their observations indicate that this process entails a lengthening of the telomeres, a marker of cellular rejuvenation. This elongation occurs, according to this research, due to the action of telomerase.

“What we have seen for the first time is the induction of telomerase ‘in vivo’,” explained Blasco and Rosa M. Marion, the leading authors of the paper. “To date, we do not know of any study that describes the induction of endogenous telomerase by defined transcription factors in the context of adult tissues,” say the authors.

SIMILARITIES WITH EARLY STAGES OF CANCER

The loss of cell differentiation is a phenomenon that takes place in a physiological context. It occurs during tissue regeneration and also in tumourigenesis. In fact, “this is increasingly considered one of the critical initial steps in cancer development,” as stated in the paper.

Dedifferentiation induced by ‘in vivo’ reprogramming, as well as the dedifferentiation associated with the initiation of cancer, involve “similar changes in the telomeres”, say the authors. In both of these processes, we see the activation of telomerase and the subsequent elongation of the telomeres.

A better knowledge of the changes described in the telomeres during ‘in vivo’ reprogramming and in pathological processes, such as cancer, will improve our understanding about the molecular events associated with cellular differentiation and, most likely, with other processes that involve cell plasticity.

This work has been funded funded by the Spanish Ministry of Economy and Competiveness (PLAN RETOS) and by the Fundación Botín.