An increase in the capacity to produce nucleotides, the ‘building blocks’ of DNA, reduces genome fragility and counteracts premature ageing in mutant mice for the ATR protein

The experiments may explain the beneficial effects of folic acid, a precursor of nucleotides, which are clinically used to alleviate the degenerative symptoms associated with ageing

Ageing is an intrinsic part of life and is the result, among other phenomena, of progressive accumulative damage within cellular DNA. In 2009 researchers from the Spanish National Cancer Research Centre (CNIO) under the leadership of Óscar Fernández-Capetillo described how mice with low levels of the ATR protein, essential for the repair of damaged DNA, age faster than normal. A research manuscript published today by the same team in Genes & Development describes a method to rescue the premature ageing in these mice, doubling their life span. The strategy: to introduce a mutation capable of increasing the body’s capacity to produce nucleotides — the building blocks of DNA, or dNTPs — available in the cells.

The authors based their findings on previous research using the yeast Saccharomyces cerevisiae, in which high level of nucleotides were shown to improve the viability of mutants of the ATR gene. “Although yeast does not age as such, the mutation of ATR in mice was also pathological, which led us to explore whether an increase in the nucleotides could also alleviate the premature ageing seen in those animals,” say the researchers.

In order to know whether the results in mammals might match those obtained in yeast they created a mouse with two genetic alterations: together with the original mutation in ATR that caused the premature ageing, the animals contained multiple copies of Rrm2, the key gene for the synthesis of nucleotides. The results showed how the accelerated ageing was significantly alleviated in these mice, namely increasing their survival from an average of 24 weeks to 50 weeks.

Of note, ATR-mutant mice were based on a human disease called Seckel syndrome, originally known as “bird-headed dwarfism”. In addition to rescuing the accelerated ageing, the other symptoms associated with this disease also improved with this innovative strategy.

THE FIRST MAMMAL WITH LESS FRAGILITY IN ITS GENOME

The genome of every living being contains certain fragile areas. These are defined due to their tendency to break spontaneously, and they have been shown to be involved in human diseases, including cancer. The studies described in this research paper showed that those mice with additional copies of Rrm2 suffered less DNA breaks in these fragile areas, this being the first mammal described to present a genome which is less fragile than that of a normal mouse.

Whether these results are relevant with respect to normal — rather than premature — ageing remains to be discovered. Whatever the case, the authors point out that standard medical practice includes prescribing folic acid (or vitamin B12) supplements to the elderly to delay or lessen the degenerative symptoms associated with advanced age. Bearing in mind that folic acid is, among other things, a precursor molecule in the synthesis of nucleotides, these results might indicate that a scarcity of nucleotides could contribute towards the ageing process in humans.

“The question we are asking ourselves now is whether an increase in the capacity to produce nucleotides could also lengthen life expectancy in normal animals without premature ageing,” says Fernández-Capetillo. Finding the answer is now in the hands of Andrés López-Contreras, the first author of the article who will now continue these studies as head of his own laboratory at the University of Copenhagen.

This research has been funded by the Spanish Ministry of Economy and Competitiveness, the European Union, the Howard Hughes Medical Institute, the Spanish Association Against Cancer (AECC) and the Botín Foundation and Banco Santander, through Santander Universities. 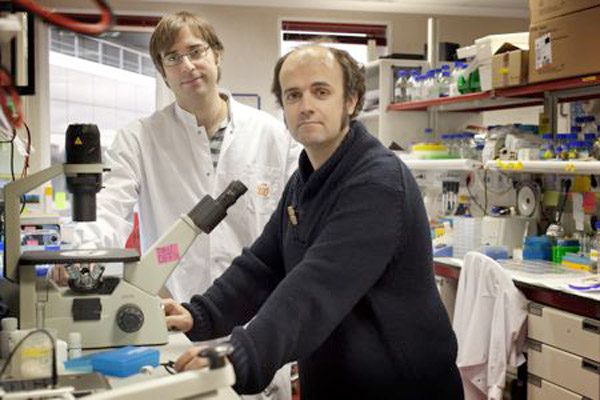