Nature. A discovery has been made of the first ‘molecular labels’ that predict the organs where metastases will form

This work, published in ‘Nature’ magazine, is signed by more than 50 scientists from seven countries, under the joint leadership of researchers from the CNIO, the Weill Cornell Medical College (USA) and the Memorial Sloan Kettering Cancer Center (USA)

Researchers have discovered that primary tumours send messenger ‘bubbles’ capable of transforming the environments in metastatic organs, in a way that makes them more welcoming for tumour cells. In addition, these tumour ‘scouts’ have different molecular labels which, like zip codes, allow them to nest in specific organs

This discovery will help to define the best treatment for each patient and to be on the lookout for the appearance of metastasis. In the longer term, the discovery of how the fate of metastasis is decided will be highly useful in intercepting the early stages of formation

Understanding why a tumour metastasises in specific organs and do not in others is one of the top goals of oncology, and also one of the oldest. 126 years ago, the British physician, Stephen Paget, formulated his seed and soil theory, which advocates that metastasis requires the dispersal of tumour cells, seeds, as
well as a welcoming environment, fertile soil, in the recipient organ. However, since then “the progress made in deciphering the mechanisms that guide metastasis to specific organs has been insufficient,” write the authors in the report published in Nature.

Ayuko Hoshino and Bruno Costa-Silva, co-first authors in this publication, together with Peinado and Lyden, have collected evidence that tumours release millions of vesicles carrying representative samples of their proteins and genetic content. These are called exosomes and, like messenger vessels or scouts, they are in charge of ensuring that the recipient organs are prepared to host the tumour cells. Specifically, the exosomes trigger the necessary molecular response — inflammation, vascularization, etc. — in the recipient organ to welcome the tumour cells, so that when they arrive they can proliferate.

“So far, this is the first study defining the role of tumour-secreted exosomes in organ-specific metastasis,” explains Peinado. The current work corroborates its existence, since it confirms that exosomes play a crucial role in the formation of metastasis in precise organs.

But the researchers wanted to go even further. They knew that of the millions of exosomes originating from the tumour, only a few will nest and, moreover, they will not do so in any random organ, but in some more than others. Why? Could it be possible that the exosomes, the tumour scouts, have molecular labels that in some way direct them to specific organs?

‘ZIP CODES’ IN THE EXOSOMES

To investigate this hypothesis, the authors selected 20 tumour cell lines from around ten different tumours, in which it is known that some metastasise to specific target organs; the lungs, liver, brain or bones. They analysed the proteins in their exosomes, nearly a thousand proteins, searching for those that could fulfil the role of a zip code.

They focused on a family of proteins called integrins, because these are present on the membrane of the exosomes where, theoretically, the destination label should be found. This proved to be a sound strategy. From among a thousand proteins, they found that there were indeed specific combinations of integrins associated with metastasis to the lungs, and with metastasis to the liver.

As Peinado points out, “we have determined that there is a combination of integrins in tumour exosomes that predisposes the formation of metastatic niches in different organs, specifically in the lungs and the liver.”

“Our results suggest that there is a sort of zip code on the surface of the exosomes that makes them go to specific organs and accumulate where the metastasis is going to occur,” continues the CNIO researcher.

If a tumour is tricked, by changing the destination code, it will colonise the organ that is specified. This has been tested with tumour cells that normally would go to the bones and, following the intervention of the researchers, went to the lungs. These data support that the soil is as important as the seed in the metastatic process.

Additional proof of the importance of integrins in metastatic nesting is that, as the study shows, when specific integrins are blocked in tumours that metastasize to specific organs — for example breast cancer to lungs and pancreas cancer to the liver — metastasis is reduced in these organs.

The researchers have also discovered the molecular signals that intercede in the reaction of the recipient tissue when the exosomes arrive. Specifically, these signals involve an increase in genes of the S100 family, which is  known for  provoking inflammatory  signals; inflammation  is a process associated with cancer.

These results represent the identification of potential new pharmacological targets, says Peinado: “We have defined a new type of mechanism for metastasis to specific organs that involves integrins and S100 proteins, which could be used as new anti-metastatic targets.”

The latter served for the preliminary study of the predictive power of the integrins identified, that is, whether analysis of the exosome integrins alone will make it possible to know in which organs there could be metastasis.

“Our work suggests that a high level of certain integrins in the plasma of patients with breast cancer and pancreas cancer seems to predict the organ where the metastasis will occur,” says Peinado. “But these data will have to be validated on larger cohort studies and predictive tests must be developed.”

These results generate a list of immediate tasks for researchers, from expanding the studies with patients in order to improve the predictive power of the integrins — with specific analytical technologies that are yet to be developed — to identifying other zip codes that determine metastasis to the brain or bones.

No less important is the search for new drugs: “In the future, we envisage the development of molecules to block combinations of integrins specifically in tumour tissues,” states Peinado.

This work is the result of an international, multidisciplinary and multi-institutional collaboration, which involves obtaining multiple cellular and pre-clinical models, as well as human samples. The search for these models has been carried out over the last three years with the participation of many teams, as reflected in the large number of authors in the article. 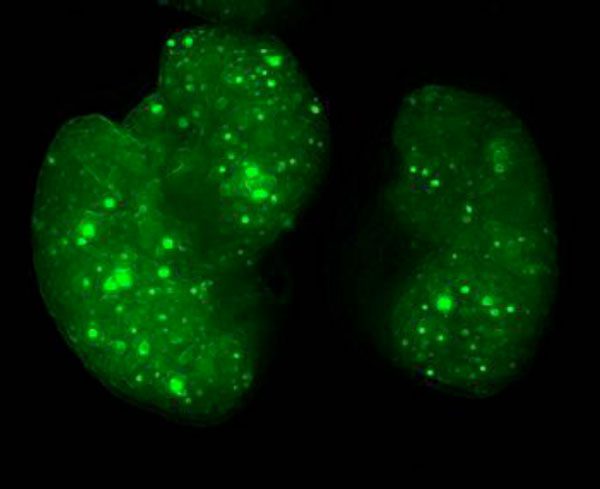 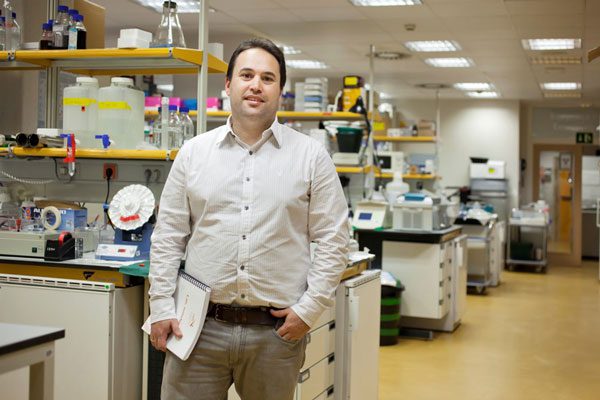 The researcher Héctor Peinado in his CNIO lab. /CNIO