Nature Communications. CNIO researchers obtain the first mice born with hyper-long telomeres and show that it is possible to extend life without any genetic modification 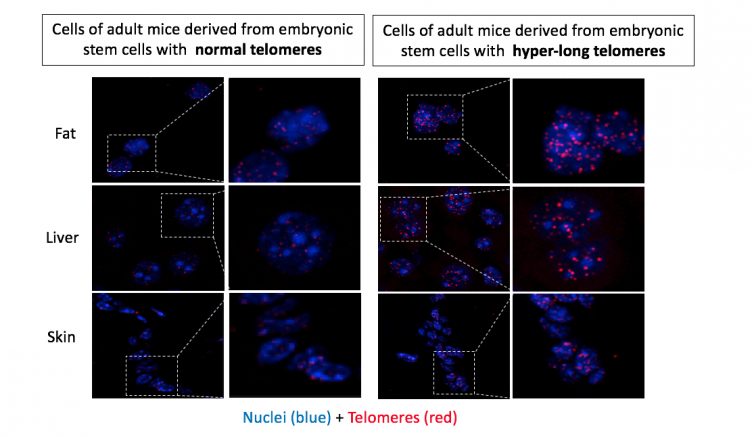 Mice with longer than normal telomeres in their species live, on average, 13% longer and in better health, free from cancer and obesity

The study has found for the first time ever a clear relationship between the length of telomeres and insulin and glucose metabolism, which are also crucial in ageing

“This finding opens the interesting hypothesis that genes are not the only thing to consider when it comes to determine species longevity. We show here that it is possible to extend mouse longevity by epigenetically changing telomere length, in the absence of genetic modifications”, indicates Maria Blasco, senior author of the paper, published in Nature Communications

A chance finding ten years ago led to the creation by researchers of the Spanish National Cancer Research Centre (CNIO) of the first mice born with much longer telomeres than normal in their species. Given the relationship between telomeres and ageing – telomeres shorten throughout life, so older organisms have shorter telomeres -, scientists launched a study generating mice in which 100% of their cells had hyper-long telomeres. The findings are published in Nature Communications and show only positive consequences: the animals with hyper-long live longer in better health, free from cancer and obesity. The most relevant thing for the authors is the fact that longevity has been significantly increased for the first time ever without any genetic modification.

“This finding supports the idea that, when it comes to determining longevity, genes are not the only thing to consider”, indicates Maria Blasco, Head of the CNIO Telomeres and Telomerase Group and intellectual author of the paper. “There is margin for extending life without altering the genes”.

Telomeres form the end of chromosomes, in the nucleus of each cell in the body.  Their function is to protect the integrity of the genetic information in DNA. Whenever the cells divide the telomeres, they are shortened a little, so one of the main characteristics of ageing is the accumulation of short telomeres in cells. “Telomere shortening is considered to be one of the primary causes of ageing, given that short telomeres cause ageing of the organism and reduce longevity”, as the paper published in Nature Communications explains.

The CNIO Telomeres and Telomerase Group has already shown in diverse studies that avoiding the shortening of telomeres through the activation of the telomere lengthening enzyme, telomerase, extends longevity without any secondary effects.

However, up to now, all interventions on the length of telomeres have been based on altering the expression of genes, through one technique or another. In fact, some years ago, the CNIO group developed a gene therapy that fosters the synthesis of telomerase, obtaining mice that live 24% longer without developing cancer of other illnesses associated with age.

13% longer, slimmer and free from cancer

The new thing is that there has been no genetic alteration in the mice born with hyper-long telomeres. In 2009, researchers worked with the so-called IPS cells -cells from an adult organism which have been given back pluripotency or the capacity to generate a full organism -, and they observed that after a certain number of divisions in culture plates, these cells acquired telomeres twice as long as normal. Intrigued, they confirmed that the same occurred in normal embryonic cells –also pluripotent-, as they are kept in cultivation after being removed from the blastocyst.

On researching the phenomenon, Blasco’s team found that during the pluripotency stage, there are certain biochemical marks (epigenetic marks) on the telomeric chromatin that facilitate their lengthening by the telomerase enzyme. For this reason, the telomeres of pluripotency cells in cultivation were extended to twice the normal length.

The question was, whether the embryonic cells with hyper-long telomeres could produce live mice? Some years ago, the group demonstrated that they could, whereby this research was also published in Nature Communications. However, these first animals were chimerical, or in other words, only part of their cells – between 30% and 70%- came from embryonic cells with hyper-long telomeres. Their good health may be attributed to the proper functioning of the rest of the cells, with normal telomeres.

In the study that has now been published, the authors have managed to obtain hyper-long telomeres in 100% of mice cells, whereby this entire peculiar feature is attributable to this phenomenon. Indeed, there are many peculiarities.

“These mice have less cancer and live longer”, according to the authors. “An important fact is that they are slimmer than normal because they accumulate less fat.  They also show lower metabolic ageing, with lower levels of cholesterol and LDL (bad cholesterol), and an increased tolerance to insulin and glucose. Damage to their DNA as they age is less and their mitochondria, another Achilles heel of ageing, function better.

In conclusion, “these unprecedented results show that longer than normal telomeres in a given species are not harmful but quite the contrary: they have beneficial effects, such as increased longevity, delayed metabolic age and less cancer”.

More specifically, the average longevity of mice with hyper-long telomeres is 13% higher than usual. The metabolic alterations observed are also relevant as this is the first time that a clear relationship between the length of telomeres and metabolism has been found. The genetic route of insulin and glucose metabolism is identified as one of the most important in relation to ageing.

However, what is most striking for researchers is that this finding paves the way for extending longevity without changing the genes of the organism. Biochemical changes in the telomeric chromatin that the lengthening of telomeres in the pluripotency phase is epigenetic, or in other words, it acts as a chemical annotation that modifies the work of but does not alter their essence. “Extending the time during which embryonic cells remain in pluripotency to generate mice with longer telomeres, protected from cancer and obesity, and with increased longevity has been enough to make mice have longer telomeres and lie ”, point out the authors. “We present a new model of in which ageing has been delayed without any genetic manipulation”.

The study has been funded by the Spanish Ministry of Science, Innovation and Universities, the National Institute of Health Carlos III, the Community of Madrid, the Botín Foundation and Banco Santander through Santander Universities, and World Cancer Research.