Nature Communications. Mice with hyper-long telomeres without altering the genes

CNIO scientists have created mice with telomeres that are longer than those of the unmodified species, show fewer signs of molecular ageing and a have a lower incidence of cancer 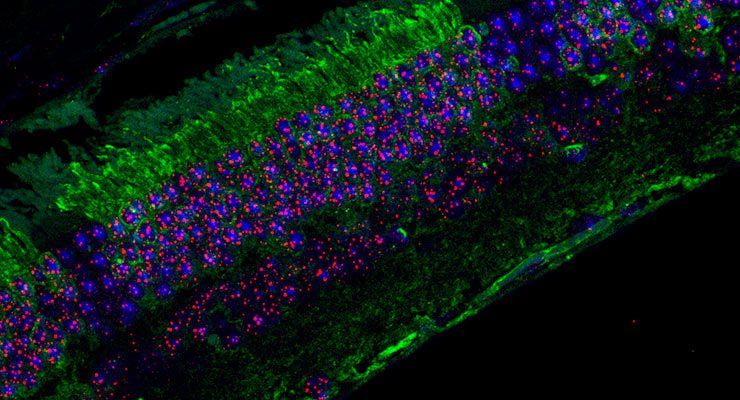 Representative image from eye of chimeric mice. Green cells are those with hyper-long telomeres. Telomeres appear in red. / CNIO

The Telomeres and Telomerase Group at the Spanish National Cancer Research Centre (CNIO), in collaboration with the Centre’s Transgenic Mice Core Unit, has succeeded in creating mice in the laboratory with hyper-long telomeres and with reduced molecular ageing, avoiding the use of what to date has been the standard method: genetic manipulation. This new technique based on epigenetic changes that is described today in the pages of Nature Communications, avoids the manipulation of genes in order to delay molecular ageing. The study also underlines the importance of this new strategy in generating embryonic stem cells and iPS cells with long telomeres for use in regenerative medicine.

Telomeres (the protective structures located at the ends of chromosomes) are essential to the stability of our genetic material and to maintain the “youthful state” of our cells and of our bodies. However, telomeres get shorter as we age. Once they reach a critical length, cells enter a state of senescence or die. This is one of the molecular causes of cellular ageing and of the emergence of ageing-related diseases.

On the other hand, when telomeres are extra-long -as achieved for the first time by the CNIO group headed by Maria A. Blasco using the expression of the telomerase gene- they exert a protective role against ageing and ageing-related diseases, thus significantly extending the lives of the mice.

THE IN VITRO EXPANSION OF PLURIPOTENT CELLS LENGTHENS TELOMERES

We must go back to the year 2009 when, in a paper published by the CNIO Telomeres and Telomerase Group in the journal Cell Stem Cell, they described that the in vitro culture of iPS cells caused the progressive lengthening of telomeres, to the point of generating what the authors called “hyper-long telomeres”. Sometime later, in 2011, Elisa Varela (also first author of this above-mentioned paper) and her colleagues at the CNIO, published a paper in the journal Proceedings of the National Academy of Sciences (PNAS) stating that this phenomenon also occurs spontaneously in embryonic stem cells when cultured in vitro.

“The in vitro expansion of the embryonic stem cells results in the elongation of the telomeres up to twice their normal length”, explained the authors. A lengthening that occurs thanks to the active natural mechanisms without alterations in the telomerase gene.

However, would these cells be capable of developing into a mouse with telomeres that are much longer than normal and that would age more slowly? In the paper published today in Nature Communications, Blasco, Varela and their colleagues prove that this is the case.

LESS DAMAGE TO THE DNA AND FEWER TUMOURS

The cells with hyper-long telomeres in these mice appear to be perfectly functional. When the tissues were analysed at various moments (0, 1, 6 and 12 months of life), these cells maintained the additional length scale (they shortened over time but at a normal rhythm), accumulated less DNA damage and had a greater capacity to repair any damage. In addition, the animals presented a lower tumour incidence than normal mice.

These results show that pluripotent stem cells that carry hyper-long telomeres can give rise to organisms with telomeres that remain young at the molecular level for longer. According to the authors, this “proof of concept means that it is possible to generate adult tissue with longer telomeres in the absence of genetic modifications”.

“Our work also demonstrates that it is possible to generate iPS cells -explains Blasco- with longer telomeres that would turn into differentiated cells also with longer telomeres and that would, therefore, be better protected against damage”. This would be of benefit to the field of regenerative medicine; teams are now studying how to use iPS cells to generate adult cell types for cell therapy.

The next step that the CNIO Telomeres and Telomerase Group is already working on will be to “generate a new species of mice in which the telomeres of all the cells are twice as long as those in normal mice”, explain Blasco and Varela. “Then, we will be able to address some of the important questions that remain unanswered: would a mouse species with telomeres that are double in length live longer? Is this the mechanism that is used by nature to determine different longevities in genetically similar species? Would this new species present a higher or lower incidence of cancer?

The study has been funded by the Spanish Ministry of Economy and Competitiveness, the European Research Council (ERC), the Regional Government of Madrid, the AXA Research Fundation, and the Botín Foundation and Banco Santander through Santander Universities. 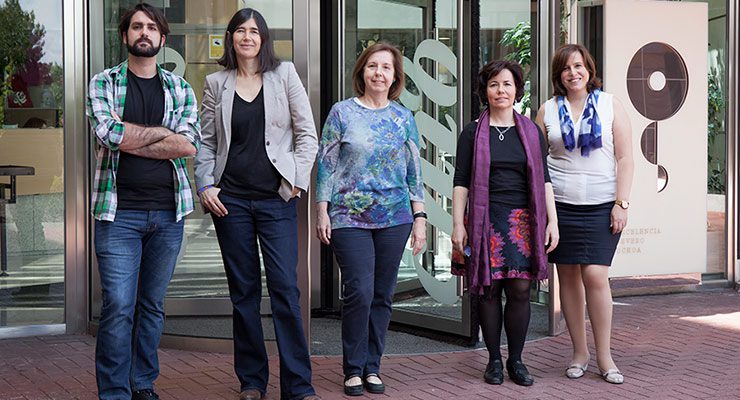