The two subtypes of this kind of leukaemia, mutated and non-mutated, show different levels of aggressiveness and are closely related to the genetic variability amongst individuals

If these results are confirmed by further research, a classifier based on gene expression variability could be designed for this kind of leukaemia

The study has been published by the journal Genome Medicine

The genetic variability of a tumour could be a predictor for its aggressiveness: the greater the variability in gene expression, the more aggressive the tumour is likely to be. This is the hypothesis that the CNIO Structural Biology and Biocomputing Programme, led by Alfonso Valencia, is testing, after their findings on chronic lymphocytic leukaemia (CLL), now published in the journal Genome Medicine.

The team analysed gene expression in two cohorts of patients with CLL, the most common blood cancer in adults that is characterised by an overproduction of BJlymphocytes in the bone marrow and the lymph nodes. This cancer is classified into two subtypes with very different clinical outcomes: on one hand, patients with IgVH gene mutations have a good prognosis —the illness is less aggressive, it progresses very slowly and usually doesn’t require treatment— and survive for more than 20 years; on the other hand, patients with non-mutated CLL have a more aggressive disease that progresses faster, and an average survival rate of under 10 years.

The researchers examined a total of 70 mutated and 52 non-mutated CLL samples, as well as 20 control samples taken from healthy individuals. In light of their findings, the team concludes that non-mutated leukaemia, i.e. the more aggressive type, shows increased gene expression variability across individuals; whereas gene expression variability is lower in the less aggressive, mutated leukaemia. These observations were further validated by comparing them against a second sample group consisting of 24 mutated and 36 nonJmutated CLL samples.

“Our conclusion is that the coefficient of variation for gene expression in CLL efficiently predicts its aggressiveness,” explains Alfonso Valencia. “More importantly, if further research confirms these findings, a classifier based on the measurement of gene expression variability could be created to predict the disease subtype of CLL patients.”

In the study, CLL aggressiveness is specifically determined by a set of 500 genes showing increased expression variability across individuals. These genes are involved in processes such as the adaptation to the environment, cell death, tumour growth and drug resistance. The team´s next step is to discover the mechanism(s) responsible for the high levels of expression variability for a given gene across individuals.

Understanding the mechanisms underlying this phenomenon is of crucial relevance for oncology research, as it is linked to tumour heterogeneity, a key feature of cancer progression and drug resistance: the greater the genetic variability in a tumour, the better it will adapt to the environment where it grows, and the more probabilities for this tumour to spread, develop resistance to cancer therapies and metastasise to distant organs.

The study has been funded by the Ministry of Economy and Competitiveness, the BLUEPRINT Consortium and the Spanish chronic lymphocytic leukaemia project of the International Cancer Genome Consortium (ICGC). 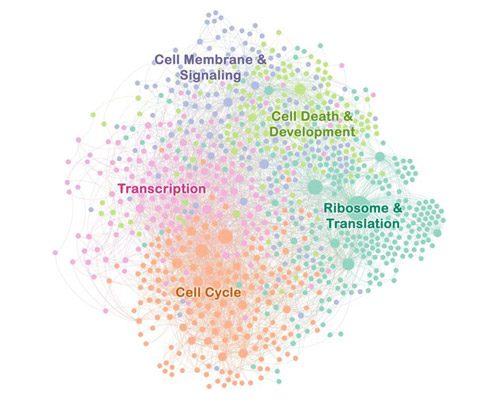 Grid of proteins conferring aggressiveness in CLL (in consistence with the study). /Simone Ecker. CNIO