Biology Open. A CNIO study recreates the history of life through the genome

The order in which DNA is copied during the cell division process reflects the evolutionary history of living beings: the oldest genes are copied first, and afterwards the genes that appeared later

One of the most important processes in the life of cells is genome replication, which consists of making exact copies of the DNA in order to pass it on to their offspring when they split. In most organisms, from yeast to human beings, genome replication follows a set plan, in which certain regions of the genome replicate before others; alterations in the late replication phases had previously been related to cancer and ageing. Now, a team from the Spanish National Cancer Research Centre (CNIO), led by Alfonso Valencia, has for the first time related this process to evolution over millions of years of life on Earth.

The study, developed alongside Tomás Marqués-Bonet from the Institute of Evolutionary Biology (CSIC-UPF) in Barcelona, represents a new evolutionary approach in which the genome becomes the lead player, and opens up new possibilities for the study of the evolution of living beings and their diversity. The results of the study are available in the open- access (free) journal Biology Open.

Valencia explains: “We have discovered that replication is like a mirror that reflects the evolutionary history of living beings: the first genes to be replicated are the oldest, whilst those that replicate later on are the youngest”.

According to this model, each new gene tends to replicate after the already existing ones, causing the accumulation of successive layers of new genes. David de Juan and Daniel Rico, researchers in Valencia’s group who have worked on the study, compare it to: “the growth of a tree trunk, in which the exterior concentric rings represent the most recent years in the life of the tree”. But what biological advantages might this model offer?

The later genetic material is copied, the greater the probability of the DNA being damaged and of mutations accumulating. This way the older genes, which are vital for life, are located in protected regions -those that accumulate less mutations- which replicate early; while the newer genes replicate in more unstable regions of the genome – those that accumulate more mutations- which replicate later on. “This allows the most recent genes to evolve much more quickly than the older ones”, says Rico.

“The regions that replicate late also have  a compact  and inaccessible structure; they are hidden zones in the genome that act as evolutionary laboratories, where these genes can acquire new functions without affecting essential processes in the organism”, adds de Juan.

The authors of the study maintain that this model could have facilitated the birth of new genes related to specific functions in tissues and organs and could have contributed to the development of complex structures such as the brain or liver.

CANCER AND THE EVOLUTION OF LIVING BEINGS: THE SAME ORIGIN

The appearance of mutations in late replicating regions had already been related to cancer and ageing in previous studies. Óscar Fernández- Capetillo, the head of CNIO’s Genomic Instability Group, and one of the study’s researchers, says the results are ‘surprising’, given that: “they help to understand how drastic changes in the genome—that until now had only been related to the formation of tumours—are, at the same time, crucial for the evolution of the species”.

The authors point out that “the fascinating thing about this model is how the late-replicating regions have contributed to the adaptive capacity of species as complex as the human being”.

The evolutionary vision of nature has reached new dimensions with the latest advances in molecular biology, and has reached its high point in the last 10 years thanks to the massive genome sequencing techniques. Valencia says the new advances in this direction will help improve our understanding of all living systems. 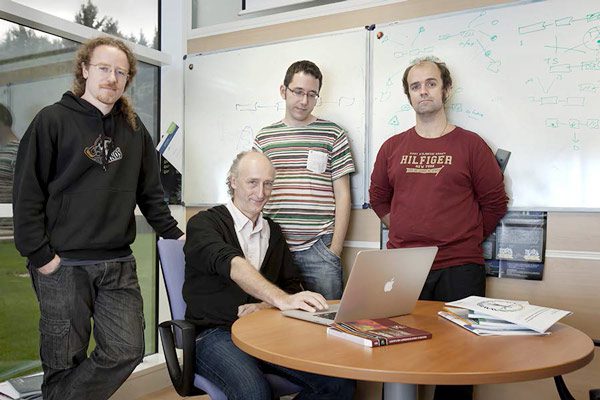