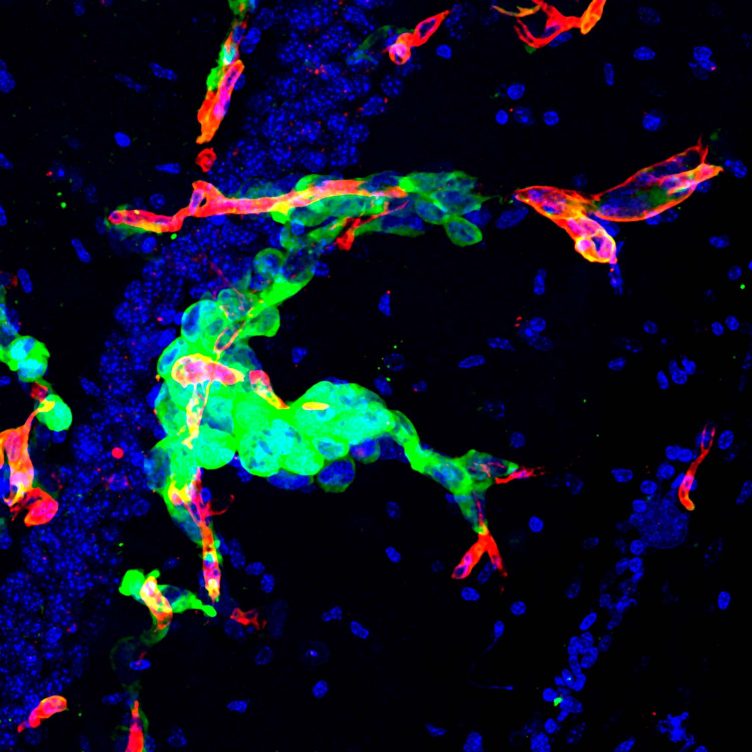 Image of metastasis in a mouse brain. In green, tumour cells that remain ‘hidden’ after surgery and act as potential seeds for recurrence of metastasis./ CNIO

METPlatform allows researchers to investigate patients' own tumour tissue. It is simple, fast, cheap, and “infinitely superior to other screening methods”
With the help of this tool, they have discovered that HSP90 inhibitors may be useful in treating brain metastases
A major challenge now is to position METPlatform as an “avatar” for patients, so that it can be incorporated into clinical trials to know in advance which drugs will work for each patient
This work has been developed through the collaboration of an extensive network of national and international partners. These include hospitals throughout Spain, members of the National Brain Metastasis Network (RENACER) recently launched by CNIO

It is estimated that about a quarter of cancer patients are at risk of brain metastases, a rate that is increasing especially among those who suffer relapses after having undergone different cancer treatments. This, in addition to the fact that there are no specific curative treatments for this type of metastasis, makes this disease a serious and growing public health problem.

To address this situation, the team led by Manuel Valiente, head of the Brain Metastasis Group at the National Cancer Research Centre (CNIO), has designed METPlatform, which will allow researchers to test drugs for possible use in brain metastases. Through an initial screening process conducted using METPlatform, researchers have already confirmed the ability of this platform to identify new therapeutic targets, as well as biomarkers of poor prognosis that identify more aggressive forms of brain metastasis. In the next phase, they will seek to expand this tool to “avatars” of patients, where they can test out potential treatments to apply the most effective one for each individual patient.

The study is published this week in the journal EMBO Molecular Medicine.

“Cancer is not just a tumour, but the tumour and its context”

One of the major limitations in the treatment of brain metastasis is that these patients have traditionally been excluded from clinical trials, so there are no specific curative treatments for this disease. “Thus, exploring therapeutic vulnerabilities and corresponding pharmacological agents with high CNS activity in preclinical models is crucial to promote urgently needed prospective clinical trials that include patients with brain metastases,” write the authors in the paper.

The new METPlatform will allow research to be carried out using the patients’ own samples in pre-clinical phases. “Cancer is not just a tumour, but the tumour and its context, and this system allows us to conduct investigations with patient samples in a real context in which metastatic cells grow in the microenvironment around the tumour, in this case the brain,” says Valiente. In addition, this tool offers an alternative to experimenting on animals.

The strategy begins with so-called organotypic cultures, which already existed. In this study, Valiente and his team have shown that they can also be used directly with patient samples: once samples of fresh brain tissue affected by metastases are received from hospitals, they are processed using a simple methodology that allows them to be cultured in the laboratory over a few days. The METPlatform screening platform is applied to these cultures, simultaneously analysing the behaviour of hundreds of compounds.

This screening method is “infinitely superior to others in use,” because it is very simple and easy to deploy in the laboratory, does not require sophisticated technology, is much cheaper, and is very fast (results can be obtained in 7 days, compared to the months needed to see results in mice).

New compounds that could block metastasis in the brain

In order to find drugs already approved or in clinical trials that can be used to treat brain metastasis, the researchers have carried out, through METPlatform, an initial screening with a library of 114 of these compounds, from the CNIO Experimental Therapeutics Programme.

Among the drugs identified are HSP90 inhibitors, which have already been tested for different types of tumours, although never in brain metastasis.

This study suggests that these inhibitors may be useful since their target, HSP90, increases in brain metastases. The use of the HSP90 inhibitor in animal models and in organotypic cultures of brain metastases obtained from 19 patients with different types of cancer showed strong anti-tumour activity.

Valiente is cautious about these results, as these molecules have shown side effects and toxicities in clinical trials with cancer patients, and he notes that a safe therapeutic window must be sought or their use in combination with other drugs explored.

“Avatars” of patients to advance in personalised medicine

With this new biomarker platform, the authors of this paper are also seeking to identify patients with a poor prognosis of the disease, for which they have found a molecular signature of four HSP90-related genes. “We speculate that this poor prognosis signature could identify patients with greater sensitivity to the HSP90 inhibitor,” says the researcher. If validated, these results may be decisive for better clinical management of brain metastases.

But the study is even more ambitious, and Valiente hopes that METPlatform could be positioned as an“avatar” of patients themselves: “Looking to the future, our goal is to incorporate this platform into clinical trials, so that we can test the drug we intend to administer to the patient using the patient’s own biopsies, so we know as soon as possible if it will work, and better prepare ourselves for possible therapeutic resistance with a battery of drugs that we would test in parallel on these same biopsies.”

A first proof of concept shows that the predictive value of METPlatform could be real, reproducing in organotypic cultures the responses of 14 glioblastoma patients treated with standard therapy. In the next phase, thanks to RENACER, Valiente’s team, together with the CNIO Biobank and the 12 hospitals associated with the network, will study whether this possibility can be validated on a large scale.