Home | News | CNIO News | CNIO hosts Intra-Venus, a sculpture by Marina Vargas, and the presentation of the Female Artists with Cancer Association

CNIO hosts Intra-Venus, a sculpture by Marina Vargas, and the presentation of the Female Artists with Cancer Association 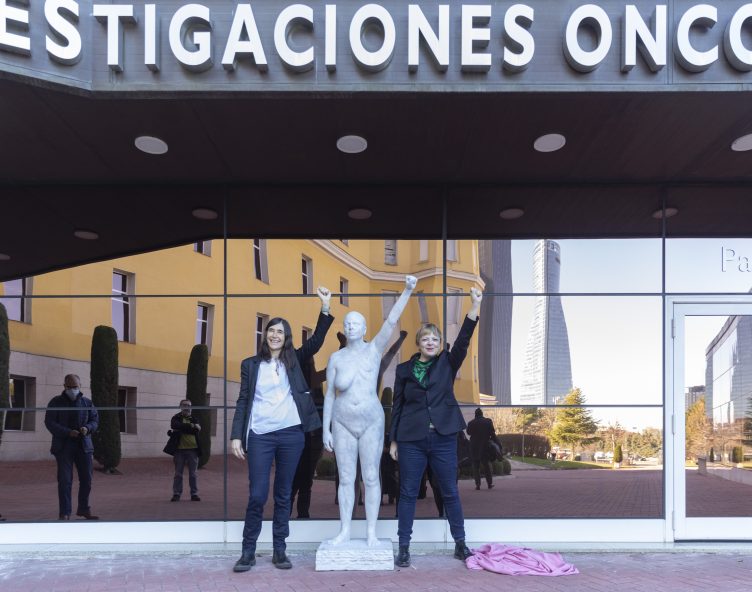 The marble sculpture by Marina Vargas will be exhibited at the CNIO hall for a year and will be open to the public
This initiative is part of the activities organised by the CNIO on the occasion of World Cancer Day on 4 February
Comprising 15 women artists who have had some type of cancer, the Intra-Venus Female Artists’ Association is a network that gives visibility and support to women with cancer

Intra-Venus is a life-size nude sculpture of a breast cancer patient who has had a mastectomy. It is a powerful sculpture in Carrara marble by Granada-born artist Marina Vargas, modelled after her own body, scanned when she had cancer. “This sculpture is meant as a performance. I wanted it to show traces of what my body looked like at the time. It is also meant as a tribute to all the women who have had breast cancer and undergone surgery,” Ms Vargas says. She is chairwoman of the newly-established Intra-Venus Association, which got its name from the sculpture itself.

Both the sculpture and the Intra-Venus Association for the Visibility and Support of Female Artists with Cancer were introduced at the Spanish National Cancer Research Centre (CNIO). The presentation drew about 50 guests, including CNIO Director Maria A. Blasco; Cristóbal Belda, Director of the National Health Institute Carlos III; Borja Baselga, Chairman of Fundación Banco Santander; Carmen González Madrid, Chairwoman of Fundación Merck Salud; representatives of the Intra-Venus Association and many female artists.

In her speech, Maria A. Blasco mentioned Susan Sontag’s essay Illness as Metaphor: “In the prologue, Sontag says that illness is not a metaphor, and the healthiest way of being ill is getting rid of metaphorical thinking. By ‘metaphor’, Sontag means lack of knowledge and the use of stereotypes, which are bad for patients and hide the issues that really matter.” The need to make the real situation of cancer patients visible was also highlighted by the oncologist and Director of the Health Institute Carlos III Cristóbal Belda: “True, we wrap cancer in layers of metaphor, and they feed our fears. In the end, the most effective weapon to dispel fear is knowledge.”

At the presentation, Marina Vargas shared her experience as a cancer patient during the Covid-19 pandemic and her search for voices like Sontag’s that were raised to help understand the disease. Then she explained why associations like Intra-Venus were necessary: “We need to discuss the real processes cancer patients go through. The images shown when talking about cancer are just ridiculous. Most cancer patients feel they have nothing to do with them. If we want them to be more accurate, we should involve the patients. This is why we need networks that give support and offer encouragement, networks that bring what lies hidden to light. Cancer does not end when we finish our treatments. It is a social disease.”

Amparo Garrido, Coordinator of Institutional Image at CNIO and an artist herself, talked about the role artists could play when it comes to cancer visibility: “Artists are like antennae, like channels. Artists are connected to one another and in touch with the collective unconscious. Artists give shape and voice to those things that are difficult to deal with.”

Marian Fernández-Cabo, Professor of Art Education, shared some facts about this: “What happens to women has often been played down in the history of science. We have been told that our ailments are not important, have been overmedicated, have our symptoms classified as psychosomatic. Women are prescribed five times as many antidepressants and twice as many tranquilisers as men.” “Four in ten women diagnosed with breast cancer are victims of discrimination at work every year, lack of productivity being the most common ground for dismissal used against them. Moreover, only 53 percent of the women return to work after cancer,” she added.

An initiative that is part of World Cancer Day celebrations

The presentation was part of the activities organised or sponsored by the CNIO on the occasion of World Cancer Day on 4 February. Other activities include the “lottery” campaign – La lotería que más te toca –, featuring a lottery retailer in central Madrid to give information about the importance of cancer research and engage all members of society in the daily struggle of the more than 400 CNIO researchers.

The Intra-Venus Association is meant to be a collaborative network encouraging visibility, companionship, coaching and intergenerational support by establishing a social activism platform for creative projects. The goal is to facilitate return to work for professional women with cancer (or who have had cancer) in the areas of art and culture, offering them better quality of life and helping them understand the meaning and depth of what they are going through.

In her work, Marina Vargas pays tribute to American artist Hannah Wilke (1940-1993), a pioneer in exploring issues of feminism, sexuality and femininity in the arts. Using body art and other techniques, her self-portraits and other works illustrate major issues in art and gender, and, in her later years, in art and disease (her own illness).

About the CNIO: 450 scientists working to stop to cancer

The CNIO is a Spain-based institution dedicated to cancer research, diagnosis and treatment. Having been certified as a Severo Ochoa Centre of Excellence for the third straight time, it is ranked seventh among the world’s ten best cancer centres and first in Europe (sources: SCImago; Nature Index).

More than 450 scientists work at the CNIO, transferring the results of their research to the National Health System and to the pharmaceutical and biotech markets as fast and effectively as possible. In the past few years, the Centre has strengthened the lines of research focusing on metastasis – which causes 90 percent of the deaths by cancer worldwide –, adding several dedicated research groups. Also, it has encouraged interdisciplinary work by engaging computational experts for a broader look at cancer in all its complexity and for new therapeutic hypothesis.

Moreover, the CNIO strives to bring science closer to society through initiatives like CNIO Arte, which gathers scientists and artists in the creation of a work of art based on scientific research, or CNIO Friends, a charity platform where individuals, companies and organisations can make contributions to help cancer research at the Centre. The funds raised through CNIO Friends have facilitated the establishment of a competitive International Post-Doctoral Contract Programme to engage research talent.