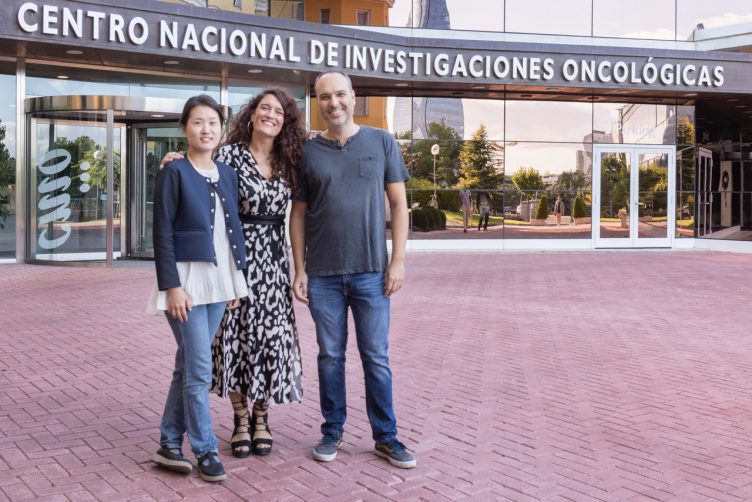 The new groups, led by researchers Felipe Cortés, Eva González-Suárez and Solip Park, join the more than 400 scientists who make up the Center to boost the basic and translational Molecular Oncology and Structural Biology programs

Felipe Cortés will study genome organization and DNA repair processes that, when deregulated, can give rise to cancer

Through large-scale computational analysis, Solip Park will use a systems biology approach to investigate why some cancer genes act differently in different tumor types

Moreover, Eva Ortega-Paíno joins as Head of the CNIO Biobank to boost the translation of research to patients through access to human samples

If cancer uses a wide variety of resources to advance, then its study should also deploy a broad range of strategies to assault it. Aware of this need, the Spanish National Cancer Research Centre (CNIO) continues to boost its Molecular Oncology and Structural Biology programs with experts who provide innovative approaches not only at the molecular level but also regarding the use of new technologies and clinical applications. Now, researchers Felipe Cortés, Eva González-Suárez and Solip Park join its ranks to boost studies on metastasis and DNA damage and to explore the revolutionary approach of systems biology, which seeks to answer biological questions by incorporating different disciplines, such as physics and mathematics, into biology. Furthermore, Eva Ortega-Paíno joins the Center to lead the CNIO Biobank.

DNA breaks at the origin of tumors

Felipe Cortés joins CNIO to lead the Topology and DNA Breaks Group, thus boosting one of the strong research areas of the CNIO, the study of the role of DNA damage at the origin of cancer, a research area for which CNIO is internationally renowned. DNA is continually exposed to damage from the organism itself (such as errors that may occur during cell division, a continuously ongoing process) or from the environment (such as sunburn or tobacco) and that is directly related to the development of cancer. Developing drugs that potentiate the molecular repair mechanisms of these types of damage is one of the great objectives of the scientists.

The Cortés group will focus on the study of topoisomerases, enzymes that are normally involved in the organization of the genome, but whose action can lead to damage in the form of DNA breaks. Thus, when they function in a deregulated manner, they may contribute to triggering the development of all kinds of tumors. In addition, they are involved in the hormonal response, which also opens avenues to explore their involvement in certain specific types of cancer, such as prostate, breast and ovarian cancer. On the other hand, some antitumor therapies use this ability of the topoisomerases to induce DNA breakage to preferentially kill tumor cells, but these treatments may result in the development of associated secondary tumors.

“At CNIO we will have the ideal environment for translating our findings on the functioning and organization of the genome to more physiological contexts of tumors and their treatment,” he explains. Besides, interaction with groups from other programs “can help us take a more clinical approach to our research.”

Felipe Cortés comes from the Andalusian Center for Molecular Biology and Regenerative Medicine (CABIMER). He has published as lead author in the highest-ranking journals, such as Nature and Science. In 2014, he received the SEBBM Young Researcher Award granted by the Spanish Society of Biochemistry and Molecular Biology, and in the same year, he was selected as a member of the EMBO (European Molecular Biology Organization) Young Investigator network, which brings together the brightest young European researchers in the area of life sciences. He also received a prestigious ERC Consolidator Grant, which he has brought to the CNIO.

The incorporation of Eva González-Suárez heading the Transformation and Metastasis Group will boost another of CNIO’s top research lines: the study of metastasis. González-Suárez aims to identify new therapies for the treatment of breast cancer and other solid tumours. One of the objectives is to verify whether RANKL pathway inhibitors – which are already being used against bone metastases in cancer patients – may also be effective in preventing and treating these tumors and reduce the occurrence of metastases and mortality. Like Cortés, González-Suárez has obtained a prestigious ERC Consolidator Grant for a research project, which she has brought to the CNIO.

“The RANK pathway acts directly on the tumor cells, but also on their environment, including the cells of the immune system that can attack the tumor and eliminate it,” explains González-Suárez. “Our goal is to gain insight into the mechanisms by which these and other proteins regulate tumor initiation and progression and to exploit this to develop new therapies that can reduce cancer mortality. Our laboratory also tries to elucidate mechanisms of resistance to chemotherapy and other treatments that are currently used in the clinic.”

Although research has made great advances in early diagnosis and treatments, which has led to a significant increase in breast cancer survival in recent years, most patients receive chemotherapy with significant side effects and many of them do not respond to currently available treatments or develop resistance to them (as has been observed, for example, for taxanes). Therefore, it is essential to continue to examine the causes of this type of tumor to continue increasing their quality of life and reducing incidence and mortality.

Eva González-Suárez obtained her doctorate at the National Center for Biotechnology (CNB-CSIC). Afterwards, she moved to the pharmaceutical industry in the United States, where she started to work on breast cancer and found that this type of tumor could be prevented with drugs used at that moment for bone-related diseases. After 4 years of international experience in the industry, she joined the IDIBELL as a group leader. She has more than 40 publications in high-impact international journals, coordinates a clinical trial in breast cancer, and is a member of several international research societies.

Solip Park will lead the Computational Cancer Genomics Group to study why cancer-related genes – both oncogenes and tumor suppressor genes – behave differently in different tumor types. “For example, PTEN is one of the best-known tumor suppressors in many types of cancer,” she explains, “but its mechanism of action may change in different tumor types, depending on the particular genetic characteristics of the patient.” Park will search for genetic variants in patients that may help explain these differences. To do this, she will perform large-scale analyses of tumor samples using computational methods and at a later stage, she will extend these studies to the population level. “At the moment, more than 80% of genomic data is on Europeans. It is very important to have data on specific variants of other populations to understand why cancer affects them differently.”

The focus of her group falls within the new strategies to interpret biological processes in a global way, as the complex systems that they are. It is no longer enough, for example, to study a single gene in depth, but in isolation. Its interactions with other genes and how it is affected by the rest of the genome or by the environment etc. must also be analyzed. This is the so-called systems biology, which uses different disciplines (molecular biology, computer science, physics, mathematics…) to address a biological problem.Along these lines, cancer is one of the most complex diseases, which involves a large number of factors, and therefore this approach is an important strategy to continue developing personalized and precision medicine.

Park began her scientific career as a bioinformatician at POSTECH (South Korea), where she established, among others, new molecular connections between diseases that usually appear simultaneously in the same patient – such as, for example, obesity and diabetes. Since 2012, she worked at the Center for Genomic Regulation (CRG), where she conducted large-scale studies of genomic cancer data.

A new chapter of the CNIO Biobank

CNIO boosts its Biobank by incorporating Eva Ortega-Paíno as Scientific Director of the Unit.

Ortega has more than 25 years of experience in the industry, academia, and the healthcare sector. During the past seven years, she focused on scientific management and worked in Sweden on Strategic Innovation Programs and for the Swedish national network of Biobanks BBMRI.se, now called Biobank Sverige (Biobank Sweden). Ortega-Paíno coordinated the Skåne region for this network and participated in working groups of the European BBMRI-ERIC consortium.

“I return to Madrid with renewed energy to place the CNIO Biobank at the forefront of not only national, but also international biobanks, and to turn it into a benchmark for cancer research,” she explains. To do this, the CNIO Biobank will provide advice to researchers on regulatory issues and the handling and quality of samples, and will facilitate access to quality samples through collaboration with among others the National Biobank Network, in which the CNIO Biobank has played a central role since its creation. “My ultimate goal is to ensure that the process of obtaining human samples is expedited so that it translates into effective research with a premium quality label, which will be of benefit to the well-being and health of society in the near future,” she concludes.