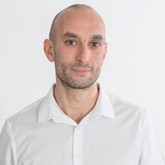 Nabil Djouder, born in France, obtained his PhD in Molecular Pharmacology from the University of Strasbourg (France) and the University of Freiburg (Germany), where he worked in the laboratory of K. Aktories. He studied the molecular mechanisms underlying the activation of mast cells by cross-linking high affinity antigen receptors (Fcε-RI) and the involvement of small GTPases from the Rho family in this activation.

In 2001, he moved to Basel (Switzerland) as a postdoctoral research fellow and joined the laboratory of W. Krek at the Novartis Friedrich Miescher Institute. He has since worked in the field of growth control, cancer, and associated metabolic disorders. Most of his research focuses on the mTOR/S6K pathway and the integration of growth factors, nutrients, and energy homeostasis.

In 2003, he moved with W. Krek to the Institute of Cell Biology at the Eidgenössische Technische Hochschule (ETH) in Zurich. He became a member of the Competence Centre for Systems Physiology and Metabolic Diseases (CCSPMD).

In October 2009, Nabil Djouder joined the CNIO as a Junior Group Leader, establishing his group in the field of Growth factors, Metabolism and Cancer. In 2011, he was awarded with the prestigious Spanish award Ramon y Cajal. He was also very successful to secure several national and international funding, including 1 grant from WCR/AICR and 3 grants from EFSD.

In January 2018, Nabil Djouder was exceptionally promoted to Senior Group Leader at the CNIO, since then devoting efforts to understanding the molecular mechanisms linking environmental stresses to disease pathogenesis affecting the organs of the digestive system.