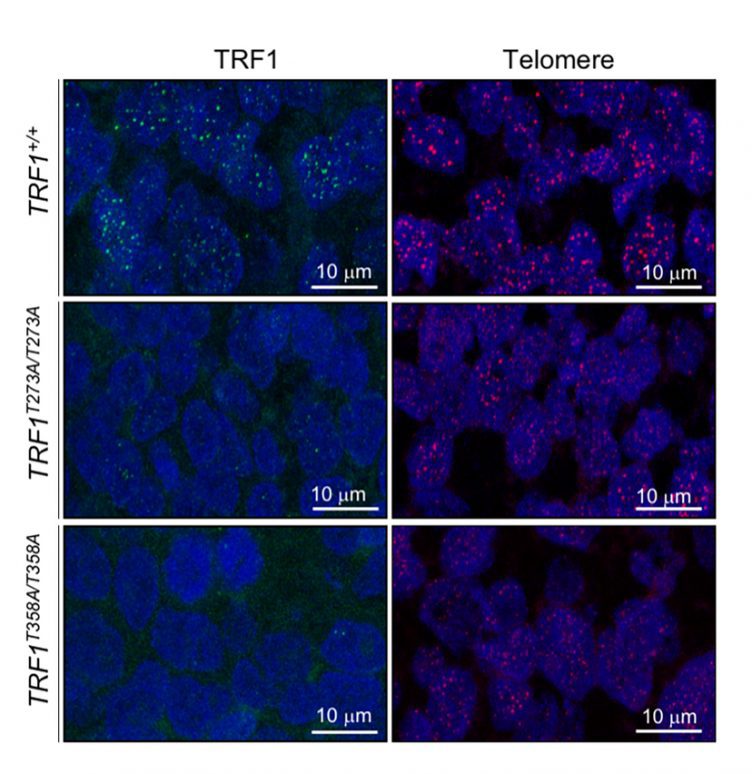 When TRF1 is phosphorylated by AKT, telomeres are normal (top); in the cell lines where AKT doesn't modify TRF1, telomeres are shorter and have a lower potential to generate tumours (bottom). /PLOS Genetics

The protein TRF1, which is part of the 'protective shield' at the ends of chromosomes, or telomeres, is regulated by the PI3K/AKT pathway, one of the most frequently affected pathways in numerous tumorigenic processes

When the researchers created human cancer lines that prevented AKT from modifying telomeres, they observed shorter telomeres and a reduced ability to generate tumours

The Telomeres and Telomerase Group led by Maria A. Blasco at the Spanish National Cancer Research Centre (CNIO) continues to make progress in unravelling the role that telomeres –the ends of chromosomes that are responsible for cellular ageing as they shorten– play in cancer. The CNIO team was among the first to propose that shelterins, proteins that wrap around telomeres and act as a protective shield, might be therapeutic targets for cancer treatment. Subsequently, they found that eliminating one of these shelterins, TRF1, blocks the initiation and progression of lung cancer and glioblastoma in mouse models and prevents glioblastoma stem cells from forming secondary tumours.  Now, in a study published in PLOS Genetics, they go one step further and describe for the first time how telomeres can be regulated by signals outside the cell that induce cell proliferation and have been implicated in cancer. The finding opens the door to new therapeutic possibilities targeting telomeres to help treat cancer.

The CNIO group was also the first to find a link between TRF1 and the PI3K/AKT signalling pathway. This metabolic pathway, which also encompasses mTOR, is one of the pathways most frequently affected in numerous tumorigenic processes. However, it was not known whether preventing TRF1 regulation by this pathway can have an impact on telomere length and its ability to form tumours. AKT acts as a transmitter of extracellular signals triggered by, among others, nutrients, growth factors and immune regulators, to the interior of cells. CNIO researchers Raúl Sánchez and Paula Martínez, directed by Maria A Blasco, set out to determine the involvement of telomeres in this signalling pathway.

To do this, the researchers modified the TRF1 protein in cells to make it unresponsive to AKT, using the gene-editing tool CRISPR/Cas9. This way, TRF1 and the telomeres became invisible to any extracellular signals transmitted by AKT.  Telomeres in these cells shortened and accumulated more damage; most importantly, the cells were no longer able to form tumours, indicating that telomeres are important targets of AKT and its role in cancer development.

“Most importantly, we found that when TRF1 can’t be phosphorylated by AKT, the latter has a lower potential to generate tumours,” explains Blasco.

The paper shows that telomeres are among the most important intracellular targets of the AKT pathway to form tumours, since, although neither the function of AKT nor of any of the thousands of proteins that are regulated by it was altered, only blocking AKT’s ability to modify telomeres was sufficient to slow tumour growth.

The next step will be to generate genetically modified mice with telomeres that are invisible to AKT. The authors anticipate that these mice will be more resistant to cancer.

The study was funded by the Spanish Ministry of Science and Innovation, the Carlos III Health Institute, the Spanish State Research Agency, the European Research Council, the European Regional Development Fund, the Autonomous Community of Madrid, the Botín Foundation and Banco Santander through Santander Universities, and World Cancer Research.