This is the first time that an essential gene for the protection of telomeres, the ends of chromosomes, has appeared mutated in human cancer

The gene of focus in this study, POT1, is one of the most frequently mutated genes in Chronic Lymphocytic Leukaemia (CLL), the most common form of leukaemia in the Western world

The study could reveal a new mechanism at the interface between cancer and ageing, given the role of telomeres in both processes

A study published today in the journal Nature Genetics explores a new mechanism that may contribute to the development of several tumours, including Chronic Lymphocytic Leukaemia, a type of cancer that affects more than a thousand new patients in Spain each year.

This work, led by researchers Carlos López-Otín, from the University Institute of Oncology at the University of Oviedo; Elías Campo, from the Hospital Clínic/University of Barcelona; and María Blasco, the Director of the Spanish National Cancer Research Centre (CNIO), represents a significant milestone for the Spanish Consortium in the study of the Chronic Lymphocytic Leukaemia Genome.

“Chronic Lymphocytic Leukaemia is the most frequent leukaemia in Western countries,” says López-Otín, adding that, “Once the most frequent genetic and epigenetic changes in its development have been decoded, it’s necessary to discover the biochemical mechanisms altered by  those  changes,  in  order to be able to improve the diagnosis and treatment of this disease.”

Thus, continuing the work from previous studies led by Campo and López- Otín published in Nature and Nature Genetics over the past two years, the researchers concentrated on the mutations affecting POT1, one of the genes involved in the protection of the ends of chromosomes, the telomeres.

This is the first time that a gene with this function has appeared mutated in a human cancer. Blasco says: “We have been studying telomere biology for a long time, given that alterations in telomere maintenance are associated with cancer and ageing. Although the mechanisms used by tumour cells to alter their telomeres have been identified, POT1 mutations reveal yet another, previously unknown route.”

Each chromosome has, at its extremes, in its telomeres, a protective hood made up of proteins, and POT1 is the staple that fixes it in place, joining it to the telomeric DNA. All of the mutations discovered in POT1 prevent this gene from fulfilling its function. The DNA at the end of the chromosome is therefore left without its protective cover. The study of the biochemical pathway that leads from these abnormalities to the uncontrolled growth of B lymphocytes can provide important clues for the understanding of chronic lymphocytic leukaemia and cancer in general.

ONE OF THE MOST FREQUENTLY MUTATED GENES IN LEUKAEMIA

Furthermore, after analysing the genome of 341 chronic lymphocytic leukaemia patients —comparing for each case the genes from normal healthy cells with those of tumour cells—, researchers have discovered that POT1 is one of the most frequently mutated genes in this illness.

Prior results from the Spanish Consortium for the study of the Chronic Lymphocytic Leukaemia Genome had already shown that more than a thousand mutations are involved in this disease, and that each patient has a unique combination of hundreds of them. One of the most unexpected findings of the Consortium’s studies is the wide genetic and molecular diversity of the disease. The different mutated genes identify relatively small subgroups of patients with diverse disease characteristics. In fact, the most frequently-repeated mutations are only present in 15% of patients.  Despite  that,  identifying  them  represents  a  great  advance, because it is a step towards the goal of personalised therapies, adapted to the genetic profile of each individual tumour.

In the study published today, the researchers have found that 3.5% of patients with chronic lymphocytic leukaemia show POT1 mutations, but this figure rises to 9% in a subgroup of patients suffering from an especially aggressive form of the disease. In this way, the study identifies POT1 as one of the most important genes for this disease.

As Campo concludes, “Patients with POT1 mutations belong to the group that has the worst prognosis. Therapeutic intervention affecting this pathway could, therefore, help treat a group of patients whose clinical outcome is currently very poor.”

The Spanish Consortium for the Study of the Chronic Lymphocytic Leukaemia Genome is financed by the Ministry of Economy and Competitiveness via the National Institute of Health Carlos III, and is within the framework of the International Cancer Genome Consortium (ICGC). Three years ago, the journal Nature highlighted the potential relevance of the anticipated research results from the ICGC in the development of new diagnostic and therapeutic  methods to fight cancer, given that the consortium plans for the large-scale coordination of the sequencing and analysis of 500 tumour genomes from each of the 50 most frequent cancers. Since then, Nature and Nature Genetics have published several articles on the most recent advances from the Spanish members of the ICGC team, which are based on the analysis of genomic and epigenomic alterations in more than one hundred CLL patients. The new study published by Nature Genetics delves deeper into one of the most surprising discoveries to come out of those first studies and contributes to emphasise the relevance of telomere dynamics. Telomeres are key structures for better understanding complex processes such as cancer and ageing. 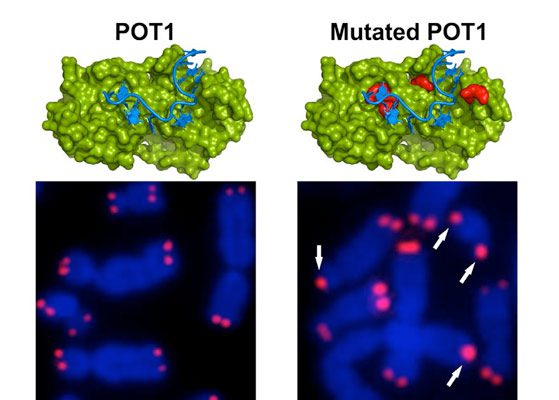 POT1 mutations generate chromosome aberrations. In the upper?left hand quadrant, the POT1 structure (in green) is shown joined to telomeric DNA (in blue). Under normal conditions (lower-left image), during metaphase, the chromosomes (in blue) have two telomeres (in red). In the upper-right hand quadrant, the same structure can be observed but with the mutated areas —all close to the telomeric DNA— shown in red. The lower-right image shows images of chromosomes during metaphase in cells with POT1 mutations. In this case, it can be seen that many chromosomes only have a single telomere at one extreme (highlighted by the white arrows). 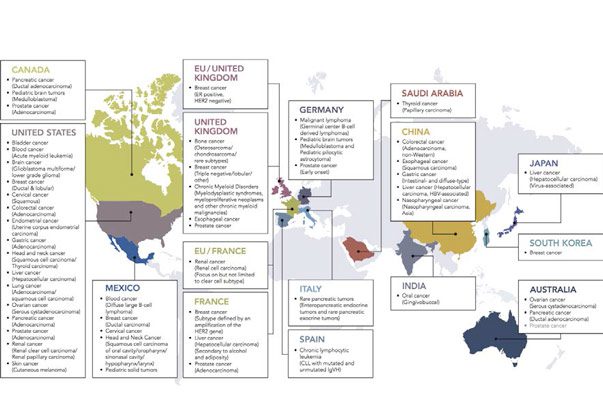