This strategy stops tumours from growing in mice without causing severe toxicities in normal tissues, contrary to what had been thought possible

The research was carried out using mouse models for lung cancer, a cancer type that has the highest death rates worldwide

The study, published in the journal ‘EMBO Molecular Medicine’, shows for the first time that telomeres may be a therapeutic target for cancer treatment

Scientists from the Spanish National Cancer Research Centre (CNIO) have discovered a new strategy to fight cancer, which is very different from those described to date. Their work shows for the first time that telomeres — the structures protecting the ends of the chromosomes — may represent an effective anti-cancer target: by blocking the TRF1 gene, which is essential for the telomeres, they have shown dramatic improvements in mice with lung cancer.

“Telomere uncapping is emerging as a potential mechanism to develop new therapeutic targets for lung cancer,” mention the authors with equal contribution in EMBO Molecular Medicine; Maria Garcia-Beccaria, Paula Martinez and Marinela Mendez, from the CNIO Telomeres and Telomerase Group led by Maria Blasco, who is also an author in the article. The research was also carried out in collaboration with the Experimental Therapeutics Programme, the Experimental Oncology Group and the Histopathology, Molecular Imaging and Microscopy Units at the CNIO, as well as with the Animal Medicine and Surgery Department at the Universidad Complutense de Madrid.

Every time a cell divides, it must duplicate its genetic material, the DNA, which is packed inside the chromosomes. However, given how the mechanism of DNA replication works, the end of each chromosome cannot be replicated completely, and, as a result, telomeres shorten with each cell division. Excessively short telomeres are toxic to cells, which stop replicating, and eventually, the cells are eliminated by senescence or apoptosis.

This phenomenon has been known for decades, as well as the fact that it usually does not occur in tumour cells. Cancer cells proliferate without any apparent limits, and therefore, they are constantly dividing, but their telomeres do not gradually become shorter; the key behind this mechanism is that the telomerase enzyme in cancer cells remains active, while in most healthy cells telomerase is turned off. The constant repair of telomeres by telomerase is, in fact, one of the mechanisms that allows tumour cells to be immortal and divide endlessly.

Hence, an obvious strategy to fight cancer is to inhibit the telomerase enzyme in tumour cells. This approach has been tested before, but with worrisome results: telomeres do shorten, but this shortening is lethal to tumour cells only after a variable number of cell divisions necessary for telomeres to become completely eroded— thus the effects are not instantly seen.

In the study now published, the researchers also target telomeres, but their approach is completely different from the telomerase one.

A NEW APPROACH FOR THE ACUTE TELOMERE UNCAPPING

Telomeres are made up of repeating patterns of DNA sequences that are repeated hundreds of times — this is the structure that shortens with each cellular division. Telomere DNA is bound by a six-protein complex, called shelterin (from the term shelter or protection), which forms a protective covering. The CNIO team strategy consisted of blocking one of the shelterins, namely TRF1, so that that the telomere shield was destroyed.

The idea of targeting one of the shelterins has not been tried so far, due to the fear of encountering many toxic effects caused by acting on these proteins that are present in both healthy and tumour cells.

“Nobody had explored the idea of using one of the shelterins as an anti-cancer target,” explains Blasco. “It is difficult to find drugs that interfere with protein binding to DNA, and the possibility exists that drugs targeting telomere caps could be very toxic. For these reasons, no one had explored this option before, although it makes a lot of sense.”

The present work subtitled ‘Shelterin as a novel target in cancer,’ shows that blocking TRF1 only causes minor toxicities that are well tolerated by mice. “It does however prevent the growth of lung carcinomas already developed in mice,” write the authors in EMBO Molecular Medicine.

TRF1 has been inhibited both genetically — in mice where the gene has been removed — and chemically using selected compounds from CNIO’s proprietary collection of active compounds. These compounds, including the inhibitor ETP-470037 developed by the CNIO Experimental Therapeutics Programme, may provide a starting point for the development of new drugs for cancer therapy.

“We’ve shown that we can find potential drugs able to inhibit TRF1 that have therapeutic effects when administered orally to mice,” says Blasco.

A CANCER WITH NO CURRENTLY AVAILABLE THERAPEUTIC TARGETS

The scientists worked with mouse models for lung cancer, the cancer type that has the highest death rates worldwide. Specifically, they used a mouse with a very aggressive type of lung cancer for which no drug targets have been found to date: the tumours have an active K-Ras oncogene and the p53 tumor suppressor is missing. TRF1 is the first target that is able to inhibit the growth of these highly aggressive tumours.

The work process has been long. The researchers first selected TRF1 among the shelterin family. TRF1 is one of the most studied shelterins that is present exclusively at the telomeres and has potential as a good anti-cancer target — its inhibition also affects the so-called cancer stem cells that might be responsible for tumour recurrence over time.

The next aim was to demonstrate that TRF1 is really an anti-cancer target. To do so, the researchers genetically blocked its activity in mice with lung cancer as well as in healthy mice, in order to test the toxicity of the procedure.

Having established the effectiveness and low toxicity of the new target, the researchers searched for chemical compounds that could have activity against TRF1. Two types of compounds have been found. “We are now looking for partners in the pharmaceutical industry to bring this research into more advanced stages of drug development,” says Blasco.

The research has been funded by the Spanish Ministry of Economy and Competitiveness and the Botín Foundation and Banco Santander, through Santander Universities. 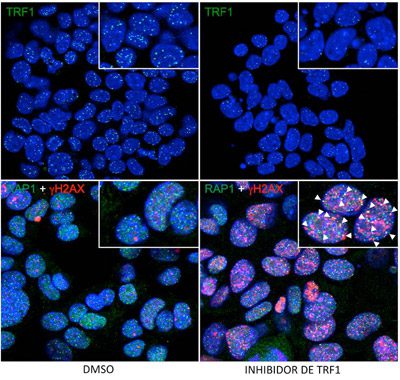