Inhibiting TRF1 had no side effects on the rodents

The Telomere and Telomerase Group at the Spanish National Cancer Research Centre (CNIO) has shown that it is possible to block the growth of human and murine glioblastoma in mouse models by blocking the TRF1 protein; an essential component of the telomere-protective complex known as shelterin. The study, published in Cancer Cell, describes a new and promising way to combat this type of brain tumour, considered one of the most lethal and difficult to treat, by attacking its ability to regenerate and divide immortally.

The average life expectancy of patients with glioblastoma is about 14 months. This brain tumour (which is the most common) can evade and overcome the limited therapeutic options that exist today to treat it. It is particularly known for its ability to regenerate, because, the tumour contains a subset of cells with characteristics that are similar to stem cells, called glioblastoma stem cells (GSCs), one of these cells is capable of reproducing the entire tumour.

These GSCs cells are the cornerstone of glioblastoma and one of its identifying features. One of their characteristics is that they have very high levels of the telomeric protein TRF1, which in addition to being essential for protecting telomeres, is required to maintain the capacity of these cells to regenerate the tumour.

“We know that TRF1 is expressed particularly in stem cells, so we thought it would be interesting to see what would happen in tumours that had a strong tumour stem cell nature if we blocked TRF1,” explains Maria A. Blasco, head of the Telomeres and Telomerase Group and senior author of the paper. Glioblastoma is clearly a type of tumour that could benefit from blocking TRF1 owing to the ability of its glioma stem cells to regenerate the tumours after current treatments.

“The first thing we saw was that TRF1 is highly overexpressed in both mouse and human glioblastomas, which indicated that by blocking it we could perhaps impair its growth,” says Leire Bejarano, a member of Blasco’s group and first author of the paper.

By studying the mechanisms by which TRF1 inhibition limited tumour growth, they found that inhibiting TRF1 caused a reduction in the proliferation and in the stem properties of glioma stem cells. This was in turn triggered by an increase in DNA damage at telomeres, which resulted from the destruction of glioblastoma telomeres. In the end, they prevented the tumour cells from continuing to multiply.

After the success in the mouse models, they began to work with human tumour cells. This required grafting glioblastoma stem cells derived from human patients into mice and treating them with a series of compounds developed at CNIO that inhibit TRF1 and which mechanism of action has been described recently by the same CNIO group. When compared with the animals treated with TRF1 inhibitors with those treated with a placebo, those treated with the TRF1 inhibitor displayed a reduction in the growth and size of the tumours, accompanied by an 80% decrease in tumour TRF1 levels and an increase in the survival rate.

In addition to the anti-tumoural properties observed, blocking TRF1 appears to be safe because did not affect the olfactory and neuromuscular functions, nor the memory, of the mice. This strengthens the idea that we now have a new therapeutic window to inhibit TRF1 in this type of brain tumour.

“It has a major therapeutic effect on glioblastoma,” says Blasco. “We see that inhibiting TRF1 is an effective strategy for treating glioblastoma both by itself and in combination with current  radiation and temozolomide therapies,” explained the authors, who also collaborated with the Seve-Ballesteros Foundation Brain Tumour Group at CNIO, headed by Massimo Squatrito, the CNIO drug discovery Experimental Therapeutics Programme, directed by Joaquin Pastor, and the CNIO Confocal Microscopy Unit, led by Diego Megías.

The next step – which they are already working on –, is to verify the effectiveness of the TRF1 inhibitors developed at CNIO in combination with other drugs that are already being used in the clinic.

This research has been funded by the Spanish Ministry of Economy, Industry and Competitiveness (SAF2013-45111-R), the Botín Foundation and Banco Santander, through Santander Universities, and Worldwide Cancer Research (WCR). 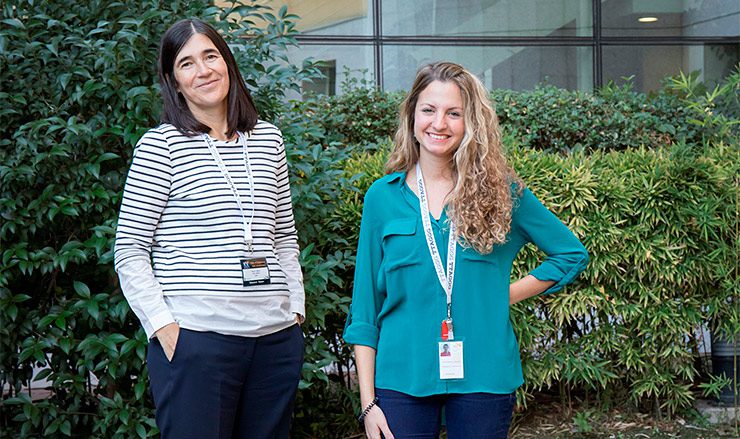