Bioluminescent mice, known as 'MetAlert', make it possible to view 'in vivo' how melanomas act before metastasis occurs, and how these invasive signals are reactivated when surgery is not efficient

One of the factors identified in this study is the MIDKINE protein, which represents a new progression biomarker and a potential target for melanoma treatment

The results on MIDKINE and the ‘MetAlert’ mice are applicable to functional and pharmacological studies on other types of tumours, in addition to melanoma. 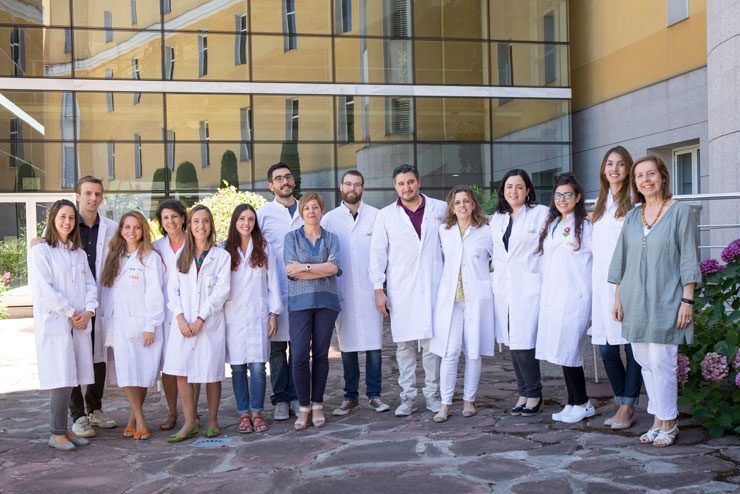 Early detection is particularly important in cutaneous melanoma, the most aggressive type of skin cancer: with a thickness of little more than one millimetre, the tumour may begin to spread, sending its cells to colonise other organs. When this occurs, the prognosis is usually poor. Treatments have improved considerably, particularly regarding immunotherapy, but melanoma mortality remains very high. One of the important questions to be answered is how melanomas acquire this inherent potential to metastasize. A technique that makes it possible to follow in vivo and, for the first time, very early stages of melanoma progression in mice, is now allowing researchers at the Spanish National Cancer Research Centre (CNIO) to study the process in detail and has even led to the identification of a potential new drug target. The paper is being published in the prestigious scientific journal, Nature.

The results of the work, which has involved an international team led by the researcher Marisol Soengas at the CNIO, are doubly relevant; according to Soengas: “We have been able to discover unknown mechanisms in the development of melanoma, and to identify new markers of metastasis that we have validated in samples from patients. These results open up new avenues for pharmacological treatments.”

One of the novelties of this paper is the development of MetAlert melanoma models. The researchers have developed mouse models that can reveal, without surgery or additional interventions, how melanoma acts throughout the body, even before the occurrence of metastases. The imaging strategy is based on highly innovative work by the group headed by Sagrario Ortega at the CNIO, which used genetic modifications to obtain mice that emit light (bioluminescence) when there is a pathogenic activation of lymphatic vessels. “These bioluminescent mice are ideal for studying melanoma” indicates Ortega, “because the generation of lymphatic vessels, or lymphangiogenesis, is one of the initial steps in the dissemination of this cancer.”

The value of MetAlert lies in the fact that it guides researchers when looking for genes and molecules involved in tumour progression at the earliest stage. It also helps study relapses after surgery, or the response to anticancer drugs. To date, the techniques available for use in animals required probes or markers that had to be injected into the area around the tumour, or that were based on the detection of tumour cells once they were already present in other organs, i.e. once metastasis had begun.

As David Olmeda, lead author of the paper, says “one of the major complications in tracking melanomas has been precisely the lack of sensitivity of the standard techniques.”

The paper now published in Nature details how, thanks to MetAlert, researchers have detected the mechanisms that melanomas activate very early on to create their own pathways of dissemination, in part through the lymph vessels. It has been suspected for some time that, before spreading, melanomas prepare the ground in the organs they are going to colonise. It was believed that this process involved activating the lymphatic vasculature in the tumour first and then in adjacent lymph nodes, the sentinel nodes, in order to reach more distant organs. However, removing the sentinel nodes does not prevent metastases in other organs, which indicates that something is missing in that model.

The CNIO Melanoma Group has discovered what it is. Thanks to the MetAlert models, it has been possible to prove that when these tumours are aggressive, they act at a distance much earlier than previously thought, and do so without the need to resort to the proteins that were previously considered essential to activate lymphangiogenesis in the tumour. “These results indicate a change of paradigm in the study of melanoma metastasis,” says Soengas.

As a result of their observations, the group decided to get a complete map of the proteins secreted by aggressive and non-aggressive melanomas. The results were instantly clear: “We found many proteins that are secreted specifically by melanomas that act at a distance, but in this paper, we focused on one in particular, MIDKINE, because it was new and could represent an alternative therapeutic target,” explains Olmeda.

MIDKINE: A KEY TO MELANOMA METASTASIS AND A MARKER OF AGGRESSIVENESS

Once again using the MetAlert mice, the CNIO Melanoma group has shown that MIDKINE plays an essential role in metastasis, to the point that its activation determines the tumour’s ability to spread through the body. In addition, they have described an entire set of signals that mediate this process. To this end, CNIO’s Melanoma group created MetAlert avatar mice that integrate human tumour samples on their skin. They also generated other MetAlert variants that reproduce mutations that are characteristic of melanomas in humans. The project also included highly sophisticated in vivo microscopy studies carried out in collaboration with the Mount Sinai Icahn School of Medicine in New York.

Following the studies conducted on mouse models, the researchers demonstrated how important MIDKINE would be in patients with melanoma. In collaboration with dermatology and pathology experts at the Hospital 12 de Octubre in Madrid, and the Hospital Clinic in Barcelona, they analysed the expression of MIDKINE in benign lesions (moles) and in melanomas at different stages of development. This experiment demonstrated that patients with high levels of MIDKINE in their lymph nodes have a worse prognosis; a finding that will lead to the use of MIDKINE as a potential biomarker of aggressiveness.

The paper has further implications, because when MIDKINE is inhibited, metastasis is also blocked as the team discovered in animal models.

“In MIDKINE we have found a possible strategy that merits consideration for drug development”, says Soengas. “MIDKINE is not the only target, of course, but as melanoma is one of the cancers with the highest number of mutations described, finding a protein that can serve to block metastasis is an important step.”

The researchers predict that the discovery of MIDKINE is only the beginning. “These metastasis-visualisation techniques are opening up new avenues of research regarding new tumour mechanisms and other preclinical studies,” say Soengas, Ortega, and Olmeda, “and they are very useful because they can be adapted to various types of cancer, not only to melanoma.”

The project was funded by the Ministry of Economy, Industry and Competitiveness, the L’Oréal Paris USA–Melanoma Research Alliance, the Worldwide Cancer Research, the Spanish Association Against Cancer, the Mutua Madrileña Foundation, the ‘La Caixa’ Foundation, Immutrain Marie Sk?odowska-Curie ITN and projects of the US National Cancer Institute.