Brain tumours are going to be the key players at the upcoming CNIO-“La Caixa” Foundation Frontiers Meetings (CFM), which will bring together 130 experts from around the world to address, from a multidisciplinary perspective, all aspects related to this heterogeneous and complex pathology. The meeting will take place from 19 to 22 February in the auditorium of the Spanish National Cancer Research Centre (CNIO).

“Primary and secondary brain tumours are an unmet clinical need,” explains Manuel Valiente, head of the Brain Metastasis Group at the CNIO and organiser of the congress, which “will combine the latest advances in research in this field of research with improvements in clinical management, the development of new drugs and clinical trials.”

This unique confluence of clinical and basic fields, together with the level of the attendees, will provide this Congress with the level of excellence that has placed the CFM in the forefront of international scientific meetings. In fact, the ‘Primary and Secondary Brain Tumors’ event – driven by the Obra Social “la Caixa”- has broken records regarding participation and the number of abstracts received.

“We hope that the combination of basic and clinical research in the same conference will be a more efficient way to promote collaboration,” said Valiente. Massimo Squatrito, head of the Seve Ballesteros Foundation Brain Tumour Group at the CNIO, and also an organiser of the Congress, stressed the participation of “leading experts in the field of neuro-oncology”. 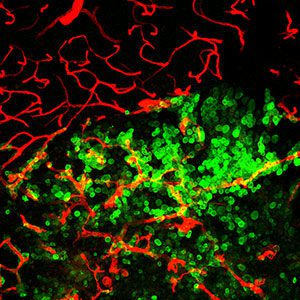 For three days, more than twenty specialists will speak about critical aspects of the biology of brain tumours and metastasis in children and adults. Among other issues, the sessions will focus on the development of new experimental models, the genetic and epigenetic determinants of these tumours, the role of non-cancerous brain cells in the progression of the disease, the development of new biomarkers to improve diagnosis, and the potential of new therapies, such as those based on activating the immune system to attack the tumour.

It is noteworthy to mention the presence of Richard Gilbertson. He is Director of the Cancer Research UK Cambridge Institute (United Kingdom) and one of the top world experts in childhood brain tumours. Gilbertson will deliver the opening speech at the CFM that will address the origins of cancer; the elements that make up the “perfect storm” and that determine the chances of developing a tumour.

Other attendees at the conference include Michael Weller ? from the University Hospital Zurich (Switzerland) and former President of the European Association of Neuro-Oncology (EANO) ? who will give the opening remarks that will be broadcast live on CNIO’s YouTube channel. Irene Puga, from the Research and Knowledge Area of the “La Caixa” Foundation, will also be participating in this opening session.