Damaged cells send signals to neighbouring cells that result in the acquisition of embryonic features, and this may contribute to tissue repair

Cell reprogramming does not happen exactly as we thought. In the pages of the journal Science, a team from the Spanish National Cancer Research Centre (CNIO) has shown that tissue damage is a relevant factor for cells to go back to an embryonic state.

Cell reprogramming earned its discoverer, Shinya Yamanaka, the Nobel Prize and opened the door to regenerative medicine. This technique, based on introducing a combination of four genes known as OSKM (for the initials of the genes, OCT4, SOX2, KLF4 and MYC), reverts adult cells to an embryonic-like state, and transforms them into pluripotent cells. However, there are several limitations to this process, such as a very low efficiency and the emergence of a particular type of tumour (known as teratoma), which make cell reprogramming incompatible with its potential clinical use.

Manuel Serrano and the Tumour Suppression Group at the CNIO have been working in this field for years. Their innovative approach led them to achieve cell reprogramming within a living organism (in this case, a mouse) in 2013, whereas, until then, reprogramming had been only reported using explanted cells out of the organism.

The work now published in Science by Serrano and his team analyses what happens in living tissues when reprogramming is induced using OSKM. What they have seen changes the idea that we had to date about this technique.

“The Yamanaka genes are inefficient inducing reprogramming or pluripotency in the highly specialised cells that constitute adult tissues,” explains Lluc Mosteiro, who has carried out most of the experimental work. Her observations indicate that tissue damage plays a critical role by complementing the activity of the OSKM genes. 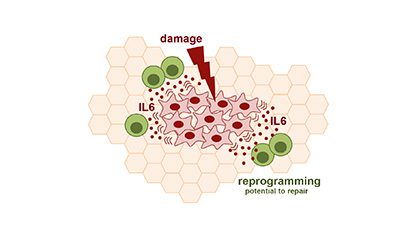 This relationship between damage and reprogramming is mediated by a proinflammatory molecule, interleukin-6 (IL6). Without its presence, the OSKM genes are far less efficient inducing the reprogramming process. These findings suggest the following sequence of events: the expression of the OSKM genes results in damage to the cells; accordingly, they secrete IL6; the presence of this molecule induces the reprogramming of some neighbouring cells.

Having identified the essential role of IL6, Serrano, Mosteiro and the rest of the team are now working on various pharmacological approaches to enhance the reprogramming efficiency, which could help to improve the regeneration of damaged tissue even in the absence of the Yamanaka genes. Improving the repairing capacity of tissues could have obvious implications for regenerative medicine, including the treatment of multiple pathologies and degenerative processes associated with ageing.

Cristina Pantoja and Noelia Alcázar, from the Tumour Suppression Group, Maria A. Blasco and Rosa M. Marión, from the Telomeres and Telomerase Group, and several CNIO Units also participated in this study, among others. This paper has been funded by the Spanish Ministry of Education, the Spanish Ministry of Economy, Industry and Competitiveness, ‘la Caixa’, the Spanish Association Against Cancer (AECC), the European Regional Development Fund, the European Research Council (ERC), the Regional Government of Madrid cofounded by the European Social Fund, the European Union, the Botín Foundation and Banco Santander, the Ramón Areces Foundation and the AXA Foundation. 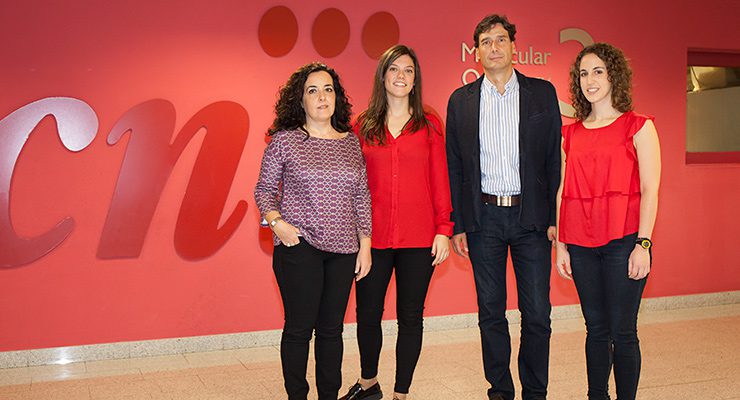