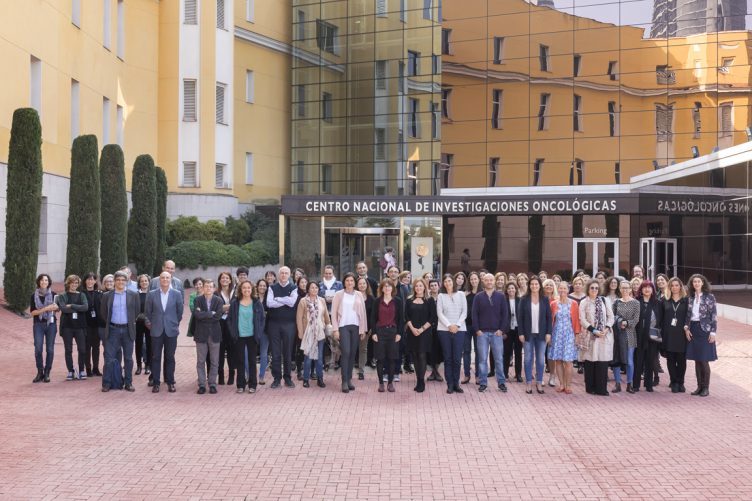 Directors of SOMMa Centres discussed at CNIO the network's best practices in gender equality, to implement a change of culture that allows gender equality to be integrated into strategic science decisions

Invited speaker Cheryl Smythe, gender equality expert from the Babraham Institute, talked about the gender policies implemented by her centre to obtain the Athena SWAN Charter, a UK recognition to best practices for gender equality, and a prospective model for similar future European initiatives

The British Embassy in Spain took part in the event, that was closed by Ana Puy, Director of the Women and Science Unit at the Ministry of Science, Innovation and Universities

On October 29, the Spanish National Cancer Research Centre (CNIO) hosted the 1st Gender Equality Event of the Alliance of the Severo Ochoa Centres and María de Maeztu Units of Excellence (SOMMa). The meeting aimed at sharing best practices in this area at the SOMMa Centres to promote a change of their institutional culture to support female talent and gender equality in science and of strategic decision-making in a coordinated and institutional way. The event, organised by SOMMa and CNIO’s Women in Science Office (WISE), which was created in 2012 by its director Maria Blasco and is coordinated by Isabel López de Silanes, enjoyed the collaboration of the British Embassy in Spain.

Many SOMMa centres carry out activities to promote gender equality. However, these initiatives are often rather individual than institutional, do not yet have dedicated resources, do not reach the required critical mass leading to stability over time or real transformation, and do not benefit from the experience acquired by other centres of the network when developing their own practices.

Therefore, during this first meeting at CNIO, several directors of SOMMa Centres discussed the network’s best practices and shared experiences, so that all its members may learn from the knowledge acquired and thus implement a change in culture that enables gender equality to be integrated into strategic decision-making in science.

“At CNIO we started making structural changes in 2012 to enable more women to take a step forward in their scientific careers,” explains Maria Blasco, CNIO Director and SOMMa Vice-Chair. “For example, the introduction of flexible working hours has significantly reduced the number of women asking for shorter working days. But much remains to be done.”

“We must support and facilitate a strategy of excellence in which gender balance benefits from scientific talent,” says Patrizia Ziveri, Chair of the Mobility and Exchange Work Package of SOMMa, Scientific Director of ICTA-UAB and co-organiser of the event jointly with CNIO. “Strategic decisions made by mixed-gender groups of experts benefit science and society. The main questions that government agencies and institutions should ask are: How do we back the scientific careers of the best women in the centres of excellence and how do we promote sustained leadership? What are the benefits for science and society of having gender diversity in future strategic decisions in research centres of excellence?”.

There is still a long road ahead before reaching gender equity in research. According to recent data (CERU Survey on Gender Equality in Research), male and female scientists doing research in Spain perceive gender inequality in the workplace very differently. Up to 79% of male researchers feel treated with equity in their workplace. This figure drops to 55% for female researcher answers. Sixty per cent of female respondents believe that maternity leave harms their career, whereas only 33% of male respondents think the same about paternity leave. In general, women feel less internal support than men do, more women think that their work is not appreciated, and they feel less encouraged to ask for a promotion. Moreover, only 40% of all Spanish male and female researchers surveyed believe that the departments are committed to gender equality.

British ambassador to Spain Hugh Elliott attended the meeting and declared that “women and science are words that should go hand in hand more often. We cannot afford this loss of talent, creativity and innovation, and this is why the British Government has committed to promote quality education for girls all over the world as its strategic goal. Governments and societies must commit to work together, to inspire and empower female talent, to support and develop it across all life stages, from school to the board of directors.”

Gender equality expert Cheryl Smythe, International Grants Manager of the Babraham Institute (United Kingdom), explained the barriers that her centre identified with regard to the gender gap, and the measures taken to overcome them and to obtain the Athena SWAN Charter. The Charter, established in 2005, recognizes UK universities and research centres that are committed to the establishment, monitoring and evaluation of practices that lead to real gender equality. In the United Kingdom, such centres must have the Athena SWAN accreditation to be able to request funding for their projects, and more and more experts are now asking that the European Union implement a similar accreditation system.

Ana Puy, Director of the Women and Science Unit at the Ministry of Science, Innovation and Universities, closed the meeting advancing that works are being carried out to establish a system for evaluating, at a national level, gender policies implemented by Spanish universities and research and innovation institutions.