Art and human evolution. Carmen Calvo presents artworks at the CNIO inspired by her conversations with Juan Luis Arsuaga 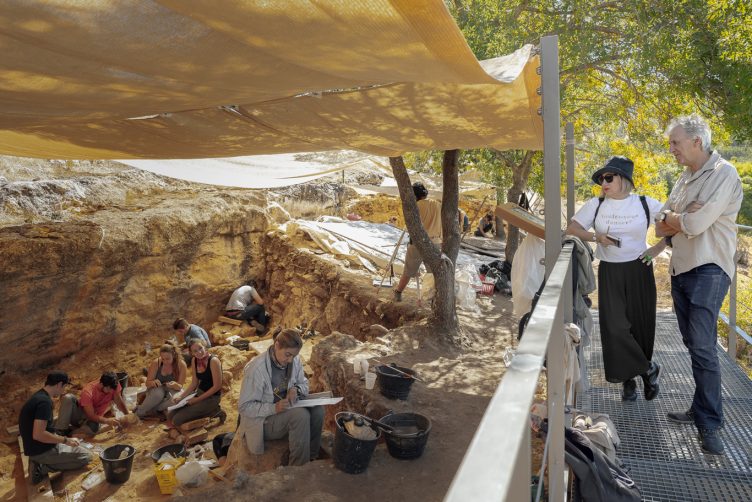 Carmen Calvo and Juan Luis Arsuaga at the archaeological site of the Valley of the Neanderthals (Pinilla del Valle, Madrid). /Amparo Garrido. CNIO

The third edition of CNIO Arte, an initiative that promotes the dialogue between art and science with the support of the Banco Santander Foundation

On February 20, four paintings by Carmen Calvo will be presented at the CNIO. Paleoanthropologist Juan Luis Arsuaga will appear as the co-star of Calvo in this third edition of CNIO Arte

On the same day, the first 'Art and Science' Symposium will be held, in which historians, art critics and artists will address the relationship between art and archaeology

The artist Carmen Calvo composes paintings from postcards of the twentieth century; paleoanthropologist Juan Luis Arsuaga unearths fossils from the Palaeolithic. Both turn objects of the past into activators of thought, in the form of either a work of art or a scientific discovery. And what ideas will come up in them when they are exposed to each other’s objects? Part of the answer lies in the four works created by Calvo on the occasion of the third edition of CNIO Arte, the initiative of the Spanish National Cancer Research Centre (CNIO) with support from the Banco Santander Foundation to promote the dialogue between art and science.

The works of Carmen Calvo will be presented on February 20 at 12pm in the auditorium ‘Margarita Salas’ of the CNIO, with the attendance of the artist and Juan Luis Arsuaga, as well as Rosa Olivares, writer and art critic; Maria Blasco, director of the CNIO; and Borja Baselga, director of the Banco Santander Foundation.

On the same day, the first ‘Art and Science’ Symposium will be held, in which historians, art critics and artists will address the relationships between art and archaeology. Fernando Castro Flórez, of the Autonomous University of Madrid; Aurora Fernández Polanco, of the Complutense University; Carlos Jiménez, emeritus professor of aesthetics, historian and art critic as well as director of the Symposium; and artists Bleda and Rosa, winners of the 2008 National Photography Award will take part in this conference.

CNIO Arte seeks for “art and science to inspire each other,” explains Maria Blasco, convinced that art and science “are communicating vessels”. “As a scientist, when I face an unexplored world, I activate my analytical skills and my creativity to the maximum; I need to observe with an open mind, a kind of look that artists probably also train.”

In the first edition, artist Eva Lootz and biologist Margarita Salas participated in CNIO Arte; last year, photographer Chema Madoz and physicist Ignacio Cirac took part. To Blasco, “to admire Lootz’s work now is to remember the amazing, inspiring and pioneering career of Salas; and, of course, Madoz and Cirac did not lower the bar by one inch.”

Proponents of openness to international art and science

For the third edition of CNIO Arte, Carmen Calvo (Valencia, 1950) and Juan Luis Arsuaga (Madrid, 1954) had conversations and walked through the Lozoya Valley together. Both are proponents of the most recent phase of openness to art and international science in Spain. In the 1990s, Calvo was working in Paris in the avant-garde of creative arts, and Arsuaga was unearthing fossils in Atapuerca that turned out to be crucial to understanding the history of mankind.

Calvo’s work is characterised by the multiple formal, technical and thematic resources she works with. She represented Spain at the Venice Biennale in 1997. Among the many awards she received, the Spanish National Plastic Arts award (2013) and her appointment as a scholar of the San Carlos Royal Academy of Fine Arts of Valencia (2014) should be mentioned. Her work can be found in the best international museums and collections, such as The Solomon R. Guggenheim Museum in New York and the Queen Sofía Museum in Madrid.

Juan Luis Arsuaga is a Professor of Palaeontology at the Complutense University of Madrid. Since 1991, he has been co-directing the excavations of the archaeological site of Atapuerca, in the Sierra of Burgos, where fossils have been found that are essential to understand human evolution. He is also the scientific director of the Museum of Human Evolution in Burgos and the recipient of the 1997 Prince of Asturias Award for Scientific and Technical Research. He has published more than 80 research papers in the most prestigious scientific journals and collaborates with researchers and academic institutions around the world. An enthusiastic science populariser, he has organised and participated in exhibitions and documentaries, and has written fifteen books. His last book is called Vida, la gran historia [Life, the great story] and was published in 2019.

Calvo’s paintings will be exhibited at the CNIO from 20 February to 3 April. The project will be presented at the ARCO Contemporary Art Fair on February 28 in the Exhibition Room, Hall 7, at 6 pm.

The benefits of the sale of the paintings will be entirely destined to finance research at the CNIO through the philanthropy initiative CNIO Friends.