Art inspired by science: artwork that has emerged from dialogues between Margarita Salas & Eva Lootz.
The CNIO and Banco Santander Foundation’s Binomio Project seeks to enrich both research and creation

'Binomio, a Dialogue between Art and Science' is a pioneering initiative in Spain which brings together leading scientists and artists, to stimulate the exchange of ideas between two different but equally necessary worlds in order to understand reality.

Lootz has created an audiovisual piece and 59 drawings which reflect on Salas’ research. The artwork will be on display at the CNIO until 6th April. Funds raised from its sale will go to cancer research.

“Scientists and artists have always faced the unknown and darkness head-on and we have not been afraid to look into it with an open mind in order to be able to learn”, pointed out Maria A. Blasco, Director of the CNIO.

“In our DNA as a foundation, we understand that both science and art are the product of human creation, that inspiration and effort feed scientific and artistic revelations or discoveries, and this is what we have been supporting in our exhibitions and activities, which often hybridise both fields”, highlighted Borja Baselga, Managing Director of the  Banco Santander Foundation

“A unique experience”. This is how Margarita Salas, a worldwide pioneer in molecular biology, has summed up what participating in Binomio has meant for her. The visual artist, Eva Lootz, her interlocutor in the project, does not skimp on adjectives either: “Being in direct contact with a pioneer in the deciphering of genetic languages has been fascinating for me”, she says.

‘Binomio, a Dialogue between Art and Science’ is an initiative by the Spanish National Cancer Research Centre (CNIO), with the support of the Banco Santander Foundation, to bring together leading international scientists and artists and hence explore the common territories of scientific research and artistic creation.

Binomio is based on a fundamental principle: both science and art are indispensable to understand and interpret the world. What’s more, art and science, as a product of the human mind can mutually inspire each other. “There are no insurmountable barriers between science and art”, pointed out Maria A. Blasco, Director of the CNIO. “Scientists and artists have always faced the unknown and darkness head-on and we have not been afraid to look into it with an open mind in order to be able to learn, to be able to see further”.

Borja Baselga, Managing Director of the Banco Santander Foundation, has highlighted “the growing importance of women in science and art as a sign of progress in the Spanish society”, and he pointed out “the richness of this project by bringing together two women from different generations, on the exemplary ground of the fight of one of them, Margarita Salas, who was a pioneer in molecular research in a world that was practically forbidden for women at that time”. 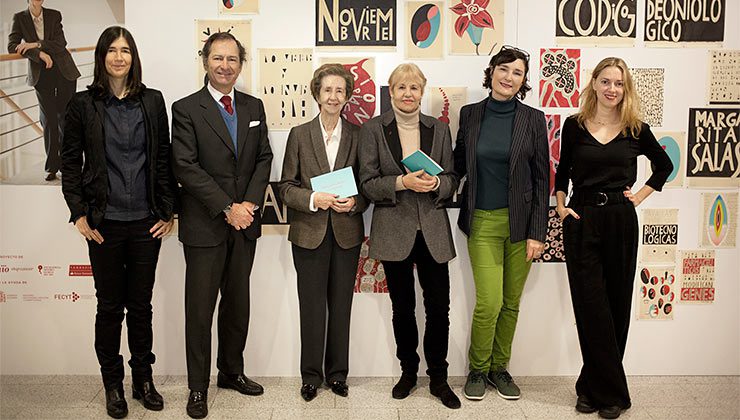 Margarita Salas and Eva Lootz, scientist and artist, are the main features of the first edition of Binomio. From their conversations and meetings in recent months Lootz has created an audiovisual piece and a series of 59 drawings, designed as thoughts or “illuminations” that reflect on Salas’ main research lines.

Subsequently, the work will go on sale to raise funds for cancer research. Furthermore, the project will be presented at the ARCO Art Fair on Friday 23rd February at 6pm (Room 37 Anniversary. Pab 9).

Salas: “Art is another passion for me”

Salas and Lootz have shared many hours in the laboratory. “In addition to my passion for science, art is another passion for me”, claimed Margarita Salas. “Therefore, the conversations about my scientific work with a great artist like Eva Lootz, which Eva has reflected in artwork of great beauty, have led to something I could not possibly imagine when the Binomio project was being considered. All my thanks to Eva for this amazing gift she has given us”.

Lootz, winner of the National Prize for Plastic Arts, has always been interested in science, and she has incorporated “hydraulic subjects, mining technology and metallurgy” in her work throughout her career. Her sculptures explore the relationship between matter and language through elements such as sand, mercury and dry ice, as well as time and sound. Her participation in Binomio has been her first contact with the science that studies the language of the genes.

Lootz: “A necessary dialogue in these times of change of era”

“I have had to familiarize myself with the world of molecular biology, which was totally unknown to me”, says Lootz. “Participating in this dialogue of art and science has been enriching and so necessary in these times of change of era”.

For her, there is no doubt that “science and the arts must find each other again” to foster reflection on advances today that promise drastic social changes, ranging from artificial intelligence to drones, as well as biotechnology and genetic modification techniques .

Lootz also highlights another aspect of her relationship with Margarita: it has enabled her to “appreciate the courage, perseverance and determination of a woman at a time when research was the prerogative of men, who managed to indulge in her passion for knowledge but continues making significant contributions today”.

First edition of many

Binomio is inspired on the book published by CNIO Excelentes, with photographs by Amparo Garrido and texts by Mónica G. Salomone, which presents portraits and biographies of prestigious scientists. Binomio sets out to invite one of the Excelentes scientists and an artist each year to enter into a dialogue that leads to the creation of a unique piece (or pieces) by the artist.

“Each artist is based on a motivation related to the scientific fact and the architect of an important discovery”, explains Mireia A. Puigventós, curator of the exhibition which opens now and coordinator of Binomio. “The objective is to intertwine a series of artistic visions whose link to science goes beyond techniques and the materials used; the creation process lies in the border that leads to new theoretical and aesthetic approaches”.

Various international scientific organisations, such as CERN –the European Organization for Nuclear Research, in Geneva– or the European Southern Observatory (ESO), owner of some of the most powerful telescopes on the planet, have programmes to foster contact between science and art. In Spain, the implementation of such an activity by a research centre is less common.

What is true is that from Leonardo da Vinci’s anatomical drawings to those of Santiago Ramón y Cajal, to mention just two examples, “no knowledge channel is impervious to the other”, says Puigventós. “Historically, we can find a lot of evidence of coexistence”.

Blasco highlights that “both art and science need creativity, freedom, reflection, curiosity. At the CNIO, where these ingredients are combined to give rise to the best science, we have also provided the conditions to generate art too. Let’s enjoy it”.