Melanoma is one of the worst and most metastatic cancers

Researchers from the Spanish National Cancer Research Centre (CNIO) have discovered more than 40 genes that predict the level of aggressiveness of melanoma and that distinguish it from other cancers with a poor prognosis. The discovery, published in Cancer Cell, will help to identify unique aspects of melanoma that could contribute to determine the risk of developing metastasis in patients with this disease. This study is relevant because it explains why a drug, also described by CNIO, is being used to selectively attack the melanoma tumour cells. Melanoma is one of the worst, most metastatic cancers known today.

What is the function of these genes? Strangely, the factors that are increased in melanoma share a common mechanism: the formation of vesicles called endosomes.

Endosomes are machinery that tumour cells, via a process called endocytosis, can use to incorporate components into their environment and obtain energy by degrading them via autodigestion or autophagy. Autophagy is also used for self-cleaning to eliminate other proteins as well as damaged or unneeded cellular components.

Among all the genes that control endocytosis, the authors of the study focused specifically on one, called RAB7; this gene is highly expressed in melanoma cells. After more than six years of research, the research team led by María Soengas, head of CNIO’s Melanoma Group, showed that RAB7 acts as an orchestra director, determining the fate of melanoma cells: at high concentrations of RAB7, cellular autodigestion is very active, and this allows tumour cells to obtain energy, prevent the accumulation of toxic components and thus divide and proliferate; when RAB7 is reduced, cells use endosomes to recycle metastatic proteins, favouring their dispersal throughout the body.

Defining “the key to the fate of the tumour cell”, as Soengas says, is just one of many new aspects of melanoma uncovered by this study. “Finding which mechanisms determine why melanoma is so aggressive is very complex because more than 80,000 mutations have been described for this tumour”, says Direna-Alonso Curbelo, the article’s first author.

This study is also relevant for clinical work. One application is the prognosis of the melanoma: the authors show in tumour biopsies that the amount of RAB7 in a cutaneous tumour defines the risk of developing metastasis. “This study opens avenues for the potential use of proteins that control vesicles and regulate autophagy as novel markers of patient survival”, says Soengas.

Furthermore, these results help to understand the mechanism of action of a compound that, as the group discovered in 2009, is lethal in melanoma cells as well as in other tumour cells. This RNA-based nanoparticle compound kills the cells by acting on the formation of vesicles.

“We knew how our nanoparticles act inside tumour cells, but not how they selectively incorporate inside the cells”, says Soengas. The size of these molecules requires cells to form endosomes in order to be able to trap the compound. This study demonstrates that this endosome formation (via RAB7) is very active in tumour cells but not in normal cells. Normal cells, therefore, do not incorporate RNA nanoparticles, reducing the risk of toxic effects.

The work published in Cancer Cell complements previous research efforts from the CNIO Melanoma Group, which could lead to the development of novel drugs that selectively target the mechanism of cell autodigestion as a potential therapeutic strategy.

This has been a multidisciplinary study in which many new computational techniques have been used to process large amounts of genomic data. CNIO’s Bioinformatics Unit has been key in comparing 900 cell lines derived from up to 35 tumour types in order to identify unique aspects of melanoma. On the other hand, CNIO’s Molecular Imaging Unit has made it possible to analyse vesicle formation mechanisms at high resolution and in real-time.

The study’s authors have worked alongside researchers from the Memorial Sloan Kettering Cancer Center in New York, as well as with dermatologists and pathologists from the hospital 12 de Octubre in Madrid, and experts in the field of melanoma diagnosis and treatment.

This work has been funded by the Ministry of Economy and Competitiveness, the National Institute of Health Carlos III, the Melanoma Research Foundation, the American Cancer Society, the Fundación Mutua Madrileña and the Fundación “La Caixa”. 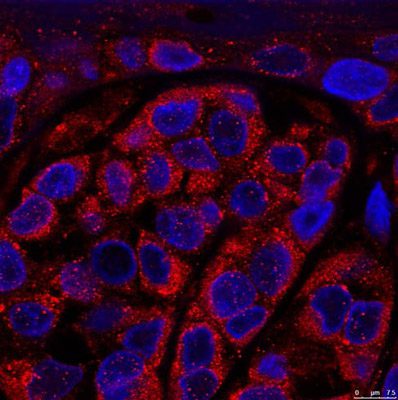