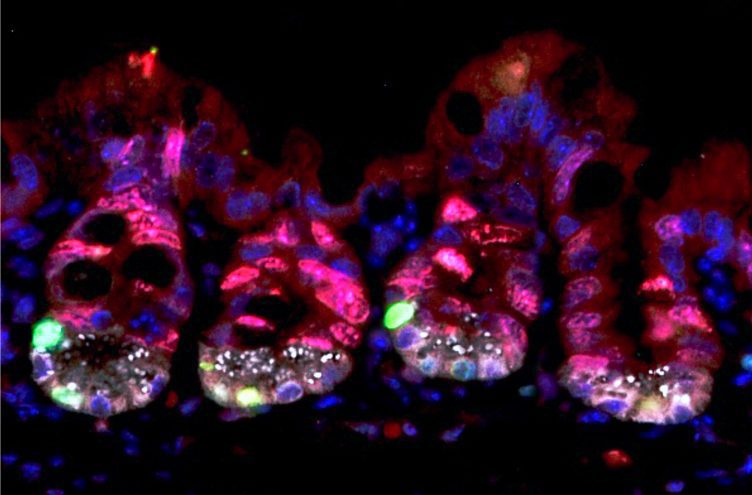 In red, highly proliferative cells of the intestinal crypts; they are targeted by irradiation and die during radiotherapy. They are considered to be radiosensitive. In green, dormant stem cells with high levels of URI; they survive irradiation, become proliferative after irradiation to regenerate the damaged intestine. /CNIO

These findings published in 'Science' could benefit cancer patients

This finding could be useful to mitigate side effects of other sources of intensive radiation, such as nuclear accidents, nuclear warfare or the exposure to cosmic radiation during space explorations

Radiotherapy, a common treatment for cancer, is one of the most effective ways to destroy cancer cells and shrink tumours. Around 50% of patients with tumours located in the gastrointestinal cavity (liver, pancreas, colon, prostate, etc) receive this type of treatment, which has increased cancer survival rates over the past decades. However, intensive radiation therapy not only damages tumour cells, but also healthy intestinal cells leading to toxicity in 60% of the treated patients. Whereas reversal of this toxicity is observed after radiotherapy has finished, 10% of the treated patients develop gastrointestinal syndrome, a disease characterised by intestinal cell death resulting in the destruction of the entire intestine and patient death.

Damage of healthy intestinal cells is the main disadvantage of radiotherapy leading to the discontinuation and failure of an efficient cancer treatment, potentially causing a quick tumour recurrence. Now, a discovery published in Science by scientists from the Growth Factors, Nutrients and Cancer Group at the Spanish National Cancer Research Centre (CNIO) might be useful to protect healthy intestinal cells from radiation damage. The consequences of their findings in mice might radically change the way humans manage exposure to high levels of radiation; both for cancer research and treatment as well as for other areas like space explorations, nuclear warfare or nuclear accidents.

The Group’s work focuses on URI, a protein whose functions remain not yet fully understood. However, previous studies from the Group have found that abnormal levels of expression of this protein in certain organs can cause cancer. The study, now published in Science, shows that high levels of URI protein protect mice from radiation-induced intestinal damage, whereas low or no detectable levels of the protein can lead to gastrointestinal syndrome and death.

“The precise functions of URI have not been identified yet,” says Nabil Djouder, Head of the Growth Factors, Nutrients and Cancer Group at CNIO and leader of the study. “Just like pH or temperature, which the organism needs to maintain within a certain range, URI levels must also be kept within a very narrow window to regulate the proper functioning of other proteins. When URI levels are higher or lower than optimal, they may promote or protect against tumour development as well as other diseases, depending on the context.”

Djouder, who has been studying URI for a long time, developed the first genetic mouse models to study the functions of this protein in mammals. His team had observed that high URI levels protect intestinal cells from DNA damage when grown in culture. Therefore, Djouder and the PhD student Almudena Chaves-Pérez suggested that they should study whether the protective function of URI was also effective in vivo and whether it was capable of mitigating the effects of high-dose irradiations and hence, gastrointestinal syndrome. To address these issues, three genetic mouse models were developed. They were the first experimental genetic mouse models designed to study specifically the role of URI and the effects of radiation on the intestine. One of them served as a control model to identify where exactly URI was expressed in the intestine; another mouse model had high levels of the protein expressed in the intestine, and in the third one, the gene had been deleted to decrease URI levels in the intestinal epithelium.

The control mice showed that URI is expressed in a specific dormant stem cell population located in the intestinal crypts (called crypts of Lieberkühn). URI protects these cells from high-dose radiation-induced toxicity. “We found that, when radiation treatment is over, these are the cells that regenerate the damaged tissue,” says Chaves-Pérez, first author of the paper. “There has been much debate recently about which stem cell population is in charge of doing this job,” she adds.

Chaves-Pérez explains these results: “What distinguishes this specific stem cell population is that under normal conditions (when they express URI) these cells are quiescent, that is, they do not proliferate. Consequently, they are not exposed to radiation damage, which only affects proliferating cells. However, when URI is not present in these stem cells, the well-known oncogene c-MYC is overexpressed, which leads to cell proliferation and increases susceptibility of these cells to radiation damage. As a result, these cells die, the intestine does not repair itself, and subsequently, the mouse dies.”

Now, it would be interesting to know whether other organs with regenerative capabilities, such as the skin, have a certain stem cell population with high levels of URI. Djouder and his team are currently doing research on this topic.

Djouder believes that, apart from its importance in the cancer field, “this finding might have significant implications for high-dose radiation protection such as in the case of nuclear accidents, nuclear warfare or exposure to cosmic radiation during long space explorations.”

The study was supported by the Spanish Ministry of Science, Innovation and Universities, co-funded by the European Regional Development Fund, “la Caixa” Foundation and the National Institute of Health Carlos III.