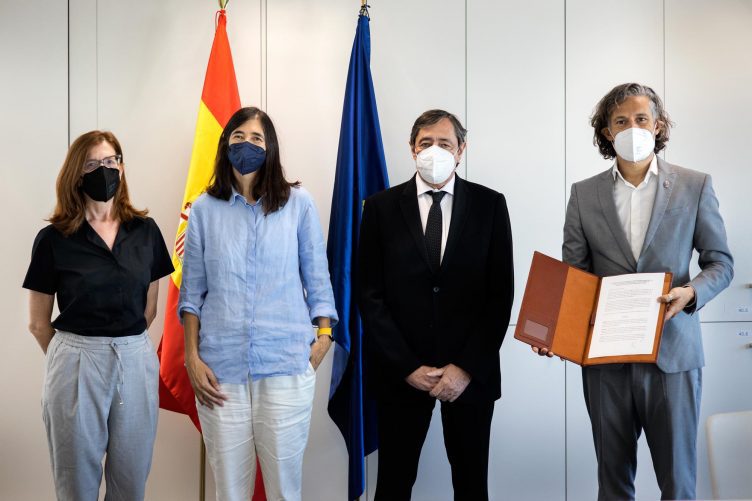 From left to right: Ruth Toledano, Maria A. Blasco, Rafael Rodrigo and Leonardo Anselmi at the agreement signing event. /CNIO

With support from over 2000 donors, €2.4 million has been raised for the ‘CNIO Friends’ International post-doctoral research contract program, whose aim is to recruit young talent and focus on innovation in cancer research

The Spanish National Cancer Research Centre (CNIO) and Fondation Franz Weber have signed an agreement to put in place a ‘CNIO Friends-Fondation Franz Weber’ postdoctoral research contract, which will offer talented researchers the chance to carry out projects using alternatives to animal testing, such as human organoids, computational biology and the CRISPR-Cas gene editing technique, among others.

Committed to good practices to reduce the number of animals needed in research, the CNIO has partnered with Fondation Franz Weber to promote alternatives to animal testing. This kind of partnership is the first of its kind to be carried out at a Spanish research centre, and one of the first worldwide.

Fondation Franz Weber is an international NGO established more than 40 years ago in Switzerland. It champions animal welfare and environmental protection, and carries out projects in all five continents.

The idea of a CNIO-Fondation Franz Weberagreement emerged after news on animal cruelty in research was spread. The two organisations are committed to promoting good practices in research centres, including a permanent, systematic approach to the development of alternative methods to animal experimentation.

“It is our understanding that the scientific community and animal protection movements have to engage with each other to search for methods that enable researchers to replace animal testing in labs. There is no doubt that animals do experience emotions, according to science. Therefore, dialogue on this issue will not end,” says the Fondation Franz Weber Director, Leonardo Anselmi.

“Through the agreement with Fondation Franz Weber, the CNIO wants to affirm its support to good practices in responsible research, including substitutes for animal testing wherever possible,” says the CNIO Director, Maria A. Blasco.

Under this agreement, in 2021 Fondation Franz Weber will support the ‘CNIO Friends’ Program, which is  aimed at recruiting young talent and focusing on innovation in cancer research.

By virtue of the agreement, the Foundation has become a member of the “CNIO Friends” donor community. A total of €2.4 million has been contributed by more than 2000 donors who are part of this community so far – individuals, businesses and associations.

In 2021, eight scientists will benefit fromthe support of CNIO Friends. They will work at the CNIO for two years, conducting world-class cancer research.