Nature Structural & Molecular Biology. An international study reveals how the ‘guardian’ of the genome works 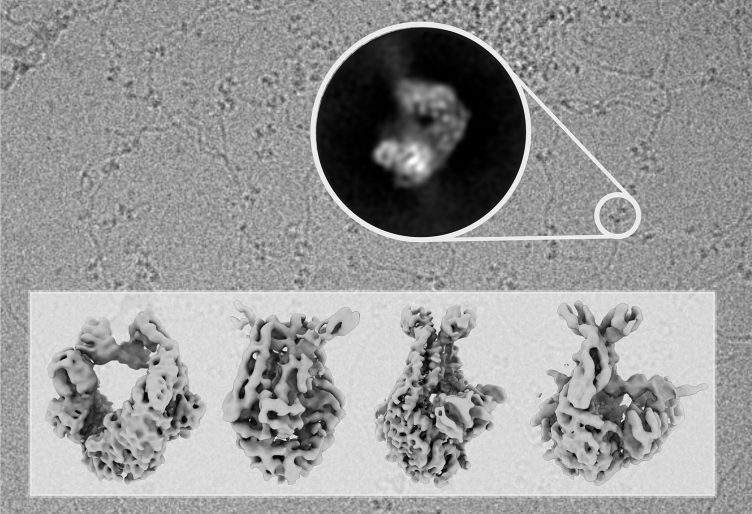 The background of the illustration is a photograph taken with the electron microscope showing DNA molecules decorated with MutS molecules, scanning the DNA for errors. The lower part shows the MutS structures at different stages of the repair process resolved in this study. /CNIO

Teams from the CNIO, the Leiden University Medical Center and the Netherlands Cancer Institute use electron cryo-electron microscopy to explain how the MutS protein, considered the 'guardian' of the genome, manages to repair the errors that can occur in DNA during cell division

An in-depth understanding of this process is essential to understand how mutations occur that can lead to the development of certain types of tumour, such as Lynch syndrome and endometrial cancer

The study is published in ‘Nature Structural & Molecular Biology’

Scientists from the Genomic Integrity and Structural Biology Group led by Rafael Fernández-Leiro at the Spanish National Cancer Research Centre (CNIO) have discovered how certain proteins ensure the repair of errors introduced into the DNA during its replication. Using cryo-electron microscopy, they made the MutS protein, also known as the guardian of our genome, visible. That enabled them to describe how this single protein is able to coordinate the essential DNA repair process from beginning to end.

The study was carried out in collaboration with Meindert Lamers of the Leiden University Medical Center (LUMC, The Netherlands) and Titia Sixma of the Netherlands Cancer Institute and the Oncode Institute. Their results are published in Nature Structural & Molecular Biology.

One of the stages of cell division is DNA replication, during which DNA polymerase duplicates the genetic information of the cell so that it can be transferred to the daughter cell. Although this is a very precise process, errors do sometimes occur. It is essential that these errors are repaired, as they can otherwise lead to the development of tumours.

The researchers had already described in previous publications that DNA polymerase has its own repairer, an exonuclease, which allows it to correct errors that are introduced during DNA replication. But when this corrector is not sufficient, the MutS protein comes into play, which scans the copied DNA for errors and then initiates and completes the repair of any errors it detects. But until now, it was not clear how a single protein could coordinate so many different processes. The international study now published has succeeded in unravelling the mechanism.

“Using cryo-electron microscopy, we were able to observe MutS while it carried out its functions and capture its molecular structure in successive conformations. With this information, we were able to understand how a single protein can coordinate the whole process, which has to be extremely accurate,” explains Rafael Fernández-Leiro.

In-depth knowledge of the DNA repair process, in which DNA polymerase, exonuclease and the MutS protein are involved, is essential to understand how alterations in any of these proteins lead to mutations and, therefore, to an increased risk of developing certain types of tumour, such as Lynch syndrome and endometrial cancer.

The researchers emphasise that unravelling protein structures is only possible due to the enormous technological advances in electron microscopy in recent years.

“Electron microscopy allows us to obtain very high-resolution images of proteins as they carry out their functions. With these images, we can reconstruct the three-dimensional structure of the protein in the computer and generate an atomic model that allows us to understand how it works,” continues Fernández-Leiro.