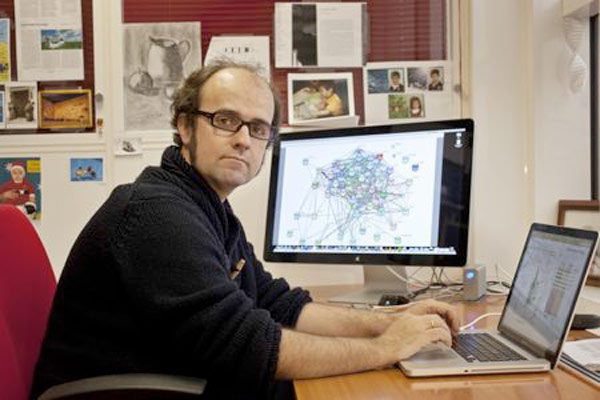 His group will investigate how to prevent replicative stress, a still little-known phenomenon involved in cancer and ageing

Óscar Fernández-Capetillo’s research group has developed compounds that only a few weeks ago were licensed by the Spanish National Cancer Research Centre (CNIO) to a pharmaceutical company for the creation of new anti-tumour drugs. This is one of the least frequent but most desired project outcomes for cancer researchers. Fernández-Capetillo can now celebrate a new achievement: the awarding by the European Research Council (ERC) of a €2 million Consolidator Grant, one of the most prestigious research grants in the world. The grant will be awarded over a five year period. Fernández-Capetillo is also one of the few scientists who have received two consecutive ERC grants.

Consolidator Grants are for researchers from any country with between six and twelve years experience following the award of their PhD degree, and “a very promising professional scientific career”, according to the ERC website. They consist of two million Euros for projects that last up to five years. Their ultimate aim is to avoid the “great loss of research talent” caused by young people without “sufficient opportunities” leaving Europe.

In this round of grants, the first of this Consolidator type, 3,600 applications from around the world were received and 312 have been accepted (approximately 8,5%). The evaluation criteria was based solely and strictly on the excellence of the projects presented. The grants have been awarded to researchers from 33 different countries, working in research institutions located in 21 European countries. In Spain, 20 researchers have received this award, as also have three other Spanish researchers who work outside the country.

“Getting an ERC Consolidator [grant] gives us five years of relief at a very difficult time for science in Spain,” says Fernández-Capetillo. “Thanks to this type of grant I can support a broad, competitive group of people, with enough funding support to be able to continue our research in cancer and ageing. Such generous funding is a responsibility bonus; if things don’t work out, we won’t be able to blame anyone but ourselves.”

PIONEER IN THE STUDY OF REPLICATIVE STRESS

Óscar Fernández-Capetillo (Bilbao, 1974) is an unusual case because he had already won —in 2007, after joining CNIO following several years at the U.S. National Cancer Institute— an ERC grant for researchers creating their own research group (known as a Starting Grant).

In the project that has just been funded by the ConsolidatorGrant, Fernández-Capetillo will carry out an in-depth investigation into the causes and consequences of what is known as replicative stress, a phenomenon related to cancer and ageing and an area where the CNIO group is a pioneer.

“Five years ago few investigators were working on replicative stress,” says Fernández-Capetillo; “now, thanks in part to the work of our group, it is a much more active area.”

Replicative stress is a potential source of errors in the cells’ genome and is related to the normal process of cell division. “Every time a cell duplicates, it also duplicates its genome, which is a three-metre-long DNA molecule packed up in a thousandth of a millimetre, and this process is not error- free,” says Fernández-Capetillo. Healthy cells have natural mechanisms to repair these errors; cancerous ones do not.

When the researcher created his own group at the CNIO in 2004, he decided to investigate this phenomenon, postulating that if replicative stress was encouraged in tumour cells, too many errors in their genome would cause them to die. This has been a focal point of his laboratory over the past few years, and the hypothesis has been proven correct. One of the outcomes of this research is the development of anti-cancer molecules at CNIO in collaboration with the Experimental TherapeuticsProgramme, which have been licensed to Merck since last December. One of the advantages of this strategy is that it is very selective; given that tumour cells are the only ones that accumulate replicative stress, they are the only ones that respond to the therapy.

As Fernández-Capetillo explains: “Our molecules prevent the protection system against replicative stress from being activated in cells, so that only those cells that develop replicative stress are damaged, like tumour cells. These molecules are not as toxic in cells that are not affected by this type of stress,” clarifying: “It’s like if you take a fireman away from a square where there’s no fire: it doesn’t matter. But if you take him away from where there is a fire, it can be catastrophic.”

This and other projects carried out by Fernández-Capetillo’s Group at CNIO have demonstrated that there is an important relationship between replicative stress, cancer and ageing, but we still have much to learn. The ERC project will focus on understanding the causes and effects of replicative stress more profoundly, both at the molecular level and at the level of the organism.

“We will try to discover new proteins that protect against replicative stress, we will look for new genes that offer resistance against it, and we will also work with mice, looking for new anti?cancer and anti?ageing strategies,” says Fernández-Capetillo.

Óscar Fernández-Capetillo received his PhD in biochemistry from the University of the Basque Country, his research was focused on inmmunology. As he was working on his doctorate, he studied computing at UNED (Spain’s Public Open University). In 2001, he joined the U.S. National Cancer Institute as a post-doctoral fellow, where he studied cellular responses to genome errors. He then returned to Spain in 2004, joining CNIO with a research contract from the Ramón y Cajal Programme. Since 2010, he has been a Senior Group Leader of the Genomic Instability Group at the CNIO. Since his return to Spain, hardly a year has gone by without him having received some kind of prize or recognition, such as the European Molecular Biology Organisation’s Young Investigator Award in 2008, or his election as a member of the prestigious Howard Hughes Medical Institute in the U.S. in 2012.

In his personal life, Óscar Fernández-Capetillo has three sons and a daughter—aged between one and ten—with his wife Matilde Murga, who is a senior researcher working in the same group.