CNIO Arte shows quantum physics with the eyes of an artist 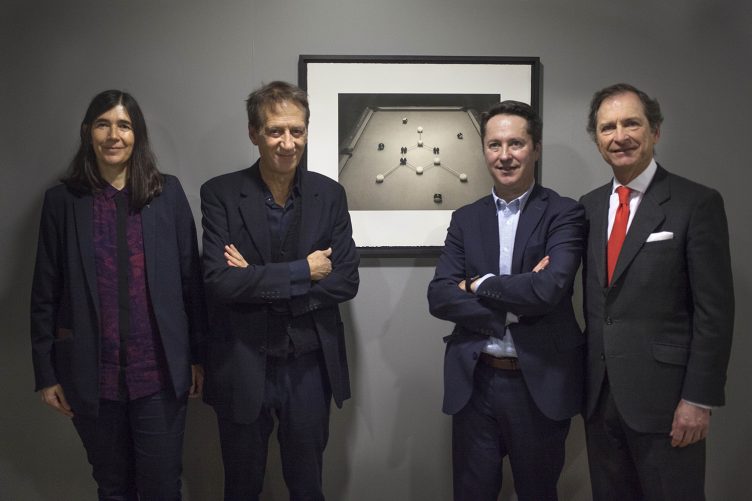 Chema Madoz, photographer, and Ignacio Cirac, physicist, have unveiled a work by the former inspired by the quantum physics studied by the latter, as part of the CNIO Arte project

“Art is a wonderful vessel for science to reach out to society, and this is what CNIO Arte is about," says Maria A. Blasco, CNIO Director

A numbered series of 30 signed photo engravings have been made of Madoz’s picture. The funds raised by its sale will go to CNIO’s cancer research, through the philanthropic initiative ‘CNIO Friends’

The piece, which will be on show at the CNIO headquarters until April 12, will also be seen at ARCOmadrid and JUSTMAD

A dimly lit table and billiard balls connected by metal sticks, forming a static, stable, hard-to-break molecule, plus loose balls that could roll on an infinite movement. This is the picture chosen by photographer Chema Madoz to illustrate Ignacio Cirac’s science. The two of them worked together in the context of CNIO Arte, the programme launched by the Spanish National Cancer Research Centre (CNIO) with the support of Fundación Banco Santander to connect internationally renowned scientists and artists. The programme’s 2nd edition, curated by visual artist Amparo Garrido, CNIO Coordinator of Institutional Image and Outreach to Society, was introduced on February 19 with a round table featuring Madoz and Cirac, CNIO Director Maria A. Blasco, promoter of the project, Fundación Banco Santander Director Borja Baselga and art critic Carlos Jiménez.

In her speech, Maria A. Blasco quoted Susan Sontag and her Diaries, where she shared the thought that a new art movement could begin every month just based on the articles published in Scientific American. “Art is a wonderful vessel for science to reach out to society, and this is what CNIO Arte is about. We want to tell society about the importance of science through art,” she said.

Blasco initiated CNIO Arte with the goal of bringing science and art closer together – two separate worlds with many things in common. “Both scientists and artists have to be creative. Both have to venture into the unknown, and to do this they need an open mind, free from prejudice. Given these characteristics, when scientists and artists come together, their interaction can only produce interesting things,” she remarked.

Borja Baselga, moderator of the round table, pointed to other things in common: “Both art and scientific researcher rest on reflection process and the generation of new ideas.”

Along similar lines, Ignacio Cirac, Director of the Max Planck Institute for Quantum Optics in Garching, Germany, sees a clear intersection between art and science, which play with similar modus operandi.. Also, he added, “art and surrealism can be a source of inspiration for scientists like me, who work on very abstract matters. We want to understand a world we cannot see, hear or touch. So we need to get an idea of this world before we can pose any further questions. In this, art can help us interpret what we are studying and make the right questions. After all, this is what we, scientists, do: rather than giving answers, we ask questions.”

Madoz explained that the meeting he had with Cirac last year helped him to “become aware of those concepts that almost border on the impossible, associated with the idea of quantum physics”. These concepts made Cirac’s work “closer and accessible, in so far as my job is about making the impossible visible out of everyday objects. My challenge was talking about quantum physics or abstract ideas using ordinary objects. What objects could I use that could be easily recognised by me and by my audience, and that could stand for concepts based on which I could create a network of references that are often equivocal or metaphorical?”.

In the end, Madoz choose billiards to illustrate Cirac’s ideas. According to art critic Carlos Jiménez, the metaphor chosen by the artist is based on two concepts that are central to quantum physics: chance and probability. “They are crucial to this scientific discipline, and they also play a key role in Chema’s photograph. Billiards, in fact, can be understood from the perspective of classical mechanics, relativity or quantum mechanics. A game of billiards can be read probabilistically.”

A numbered series of 30 photo engravings were made of Madoz’s picture. They are available for sale at two art galleries, Trinta and Elvira González, and also on the CNIO website. The funds raised will go to cancer research at CNIO, through the CNIO Friends philanthropic initiative.

The work will be exhibited at CNIO until April 12. In addition, coinciding with the season of contemporary art fairs, it will also be presented at ARCOmadrid on 1 March at 6pm (Pavilion 7, Presentations Room), and at the JUSTMAD art fair, where, between February 26 and March 3, the project will be explained at a stand that will exhibit one of Madoz’s photo engravings and a portrait of Cirac.

CNIO Arte was first launched in 2018 with a piece by visual artist Eva Lootz, created after her meetings with molecular biologist Margarita Salas. Besides the funds from the Fundación Banco Santander, the project has the support of the Spanish Foundation for Science and Technology – Ministry of Science, Innovation and Universities, through CNIO & The City.