This funding will make it possible to launch experiments that make up, according to Valiente, "the central pillar of future mechanistic and functional studies"

The head of the Brain Metastasis Group of the Spanish National Cancer Research Centre (CNIO), Manuel Valiente, received the Metastasis Research Award, granted by the Beug Foundation, in Vienna. The prize, which was presented during the Opening Conference of The Research Institute of Molecular Pathology (IMP), is designed to facilitate the implementation of original and innovative strategies to combat cancer metastasis. 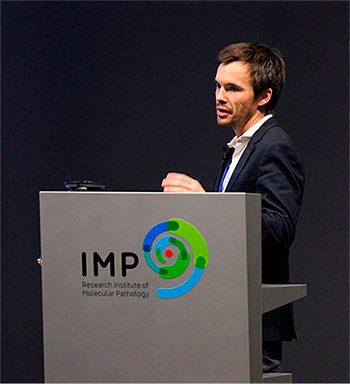 “This award allows us to start key experiments to test our hypothesis,” says Valiente. “The Beug Foundation is the only entity funding ideas with no preliminary data and this is highly necessary to evaluate whether high-risk projects could have the potential to later derive on high gains, in this case for brain metastasis patients. Consequently I am deeply grateful to the Beug Foundation for allowing us to move forward with this project.”

Valiente’s proposal focuses on the blood vessels associated with metastasis. “We previously defined the critical contribution of the interaction between cancer cells and vessels for the progression of metastasis in the brain,” explains Valiente. “We now want to discover molecular alterations induced by the presence of brain metastatic cells on endothelial cells [of the blood vessels]“.

In particular, he and his team will focus on two well-known phenomena that occur during the metastasis process. On the one hand, vascular co-option (the abduction of existing vessels), which takes place during the early stages of the colonisation of the brain; and angiogenesis (the formation of new blood vessels), which occurs in more advanced stages.

“The characterisation of these altered states of brain vessels will be critical to initiate this ambitious project aimed to define molecular alterations in endothelial cells correlating with altered permeability to drugs and which could be used as new therapeutic targets to prevent the progression of metastasis or even generate new biomarkers,” the researcher explains.

The funding obtained from the Beug Foundation will make it possible to launch a series of experiments that are, in the words of Valiente, “the central pillar of future mechanistic and functional studies” on metastasis and the blood vessels associated with it.

In 2017, Manuel Valiente also obtained funding from the Melanoma Research Alliance (MRA) – being the only Spaniard to do so this year – to investigate brain metastases associated with melanoma.