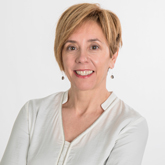 María S. Soengas was born in Agolada, Pontevedra (Spain), in 1968. She embarked upon her scientific career fi rst as an undergraduate student at the Universidad de La Coruña and later at the Universidad Autónoma de Madrid, where she graduated in Molecular Biology. There she received her PhD with First Class Honours for her studies on molecular mechanisms of DNA replication at the laboratory of M. Salas, Centro de Biología Molecular "Severo Ochoa".

In 1997 Soengas moved to the S. Lowe´s group at the Cold Spring Harbor Laboratory, New York (USA), where she assessed the role of apoptosis as a tumour suppressor mechanism, with special focus on melanoma. She then joined the Department of Dermatology at the University of Michigan in 2002 to develop a basic research programme in Melanoma. Her group defined new molecular mechanisms underlying human melanoma initiation, progression and chemoresistance.

Since 2008, Soengas leads the Melanoma Group at the CNIO. The main objective of her team is to translate basic research in melanoma to the clinic by identifying novel markers of this disease and targets for drug development.

Soengas has been recipient of fellowships and awards from both the Human Frontiers in Science Programme and the Leukemia and Lymphoma Society of America. She has also received a Life Science Biomedical Scholar Award from the University of Michigan, the Diana Ashby Young Investigator Award from the Society for Melanoma Research as well as Career Development Awards from the American Dermatology Foundation, the Elsa V. Pardee Foundation and the V Foundation for Cancer Research. She has also been honoured with the Premio M. Josefa Wonenburger from the Xunta de Galicia.