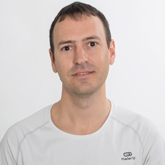 Javier Muñoz graduated in Biochemistry in 2002, and did his PhD at the University of Navarra (2007). Later, he was a postdoc in the group of Albert Heck at Utrecht University (2007-2012) where he gained extensive knowledge and expertise in mass spectrometry-based proteomics.

In 2012, he joined the Spanish National Cancer Research Centre (CNIO) as the Head of the Proteomics Unit and was also granted by the Ramon y Cajal Programme (2014-2018). Since then, Muñoz is actively working in the implementation of different proteomic approaches to unravel the underlying molecular basis of cancer. These include not only fundamental aspects of cancer such as cell cycle regulation and DNA replication but also clinical applications like biomarkers and drug discovery. In addition, the Unit’s interests focus on the proteome biology of stem cells and the mechanisms governing pluripotency.

Throughout all these years he has published over 60 articles as author and co-author and directed three doctoral thesis and several master students.