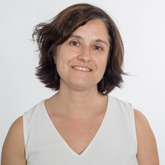 Lola Martínez, born in Madrid in 1973, studied Chemistry at the Universidad Autónoma de Madrid, obtaining her BSc in Biochemistry and Molecular Biology in 1997.

Shortly after receiving her degree she moved to London, UK, and joined the Wolfson Institute for Biomedical Research Core Support Facilities, where she first encountered flow cytometry. In 2001 she moved to a more research-driven environment and joined D. Beach’s lab at University College London (UCL), where she focused on molecular pathways that regulate the proliferation and fate determination of mammalian cells, performing genetic screening for cDNAs bypassing replicative senescence using a MoFlo High Speed Cell Sorter. In 2004 she joined the Stem Cell Consortium Initiative (funded by the Welcome Trust) and worked closely with C. Boshoff’s lab, developing new flow cytometric methods to identify and isolate endothelial precursors from bone marrow aspirates.

At the end of 2005 she joined the Cancer Research UK London Research Institute as Deputy Head of the Flow Cytometry Laboratory, where she worked with D. Davies at the largest flow cytometry facility in Europe.

She returned to Spain in June 2009 and joined the CNIO as Head of the Flow Cytometry Unit. Her main interest is to promote flow cytometry methods and technology at the Centre.

Lola has been a Member of the International Society for Advancement of Cytometry since 2003 and she is also part of the European Cytometry Network. Her contributions to the flow cytometry field are reflected by her numerous publications that she has co-authored in high-impact journals.