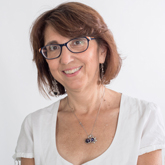 Susana Velasco-Miguel, studied chemistry at Universidad Complutense of Madrid, and in 1992 was awarded her PhD at the State University of New York at Stony Brook (SUNY Stony Brook) for her work on an in vitro model of bacterial Meningitis as well as characterizing and isolating Wilm´s Tumor cell lines. She joined the lab of Nikolai Kley at Bristol Myers Squibb Pharmaceutical Research Institute in Princeton New Jersey and worked on the isolation and characterization of p53-regulated genes which includes IGF-BP-3, PA28-RGS-14 and PA26, also known as Sestrin I or Sens-1. In 1998 Dr. Velasco-Miguel moved to UT Southwestern Medical Center in Dallas, Texas to work in the laboratory of Luis F. Parada on an animal model of Neurofibromatosis Type-1 participating in the characterization of the NF-1-p53 double mutant Mouse as well as on the development of other mutant mice to further characterize this pathway (NF-1/p19ARF, NF-1/Bax and NF-1/p21). In 2000 she got an instructor’s position at the Department of Pathology in Errol Friedberg’s laboratory. During this time she work on the design and characterization of several mice mutant, and double mutant in different DNA repair pathways, including CSA, XPC, XPA, Apex, MutY, Ogg1 and Blum. She also characterized a Mouse mutant model for the Translesion Synthesis DNA polymerase Polk or DinB, and also designed a Polk transgenic animal. In 2004 she returned to Spain as a fellow in the Ramon y Cajal program to join the laboratory of Manuel Serrano at the CNIO. While she was there she designed a Super-Sirt Transgenic animal model. In addition she has being studying the effects of a low dosage chronic treatment of resveratrol in longevity and tumorigenesis. In 2010 she accepted a position as a Group leader for the laboratory of Cell Signaling and Experimental Therapies as a research collaboration between the pharmaceutical company Eli Lilly and the CNIO.