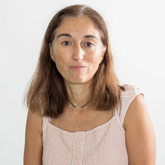 Sonia Martínez was born in Horguen (Switzerland) in 1968. She graduated from the Universidad Autónoma de Madrid in Organic Chemistry in 1991.

She then worked at the chemical company Exchem Ltd, New Oakley (UK), and returned to Spain after eight months to study for her Master’s Degree at the Instituto de Química Orgánica (CSIC) in Madrid.

In 1993 she joined GlaxoWellcome (now GlaxoSmithKline) as a PhD student to search for Phosphomannose Isomerase inhibitors as antifungal targets. As a result of this work she was awarded her PhD in 1998 at the Universidad Autónoma de Madrid.

She was then appointed as a laboratory Head at the Spanish biotechnology company Roviall Química, Murcia, where she focused on the design and synthesis of libraries of compounds applying High Throughput Synthetic Technologies.

One year later she joined Johnson & Johnson Pharmaceutical Research (a division of Janssen Cilag, Toledo, Spain) where she worked for 10 years as a Senior Scientist in the High Throughput Medicinal Chemistry Department. During this time she led the HTMC group for 1 year in medicinal chemistry working mainly on CNS projects as well as on metabolic disorders and oncology projects. She is co-holder of 8 patents.

Sonia Martínez joined the CNIO as Head of Section of Medicinal Chemistry I and Analytical Chemistry in October 2009.