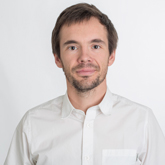 Manuel Valiente (born in Zaragoza, 1980) studied Veterinary Medicine in Zaragoza (1998-2003). He then moved to Alicante where he obtained his PhD in Neuroscience (2005-2009) in the laboratory of O. Marín at Instituto de Neurociencias where he studied the migration of neuronal precursors. During his postdoctoral work (2010-2014) in the laboratory of J. Massagué at Memorial Sloan Kettering Cancer Center he switched his main interest to focus on the ability of cancer cells to metastasize. During this period of time Manuel discovered the role of Serpins and L1CAM as critical regulators to overcome the high inefficiency associated with metastatic colonization of the brain, characterize the critical role of the reactive microenvironment in this process, identify molecular mediators of the process of vascular co-option and novel mechanisms for selecting metastatic traits.

Manuel established in 2015 the Brain Metastasis Group where he combines his interest and background on Neuroscience with research on brain metastasis. The main goal of his group is to discover critical aspects of the biology of this progression of cancer that can be directed towards the development of new therapeutic opportunities.