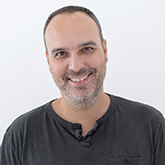 Felipe Cortés-Ledesma (born in Sevilla in 1977) Graduated in Biology in the University of Seville, and obtained his PhD in Molecular Biology from the same University under the guidance of Prof. Andrés Aguilera on the molecular mechanisms of DNA break repair using yeast as a model organism. He then joined the laboratory of Prof. Keith Caldecott at the Genome Damage and Stability Centre (University of Sussex, UK) to expand his training on DNA breaks and the DNA-damage response into mammalian systems.

After three years, he obtained a Ramón y Cajal Fellowship, with which he established himself independently at the Andalusian Centre of Molecular Biology and Regenerative Medicine (CABIMER), where, shortly after, he obtained a permanent position as Científico Titular, and more recently, a promotion to Investigador Científico in the Spanish National Research Council (CSIC).

In 2019 he joined the Spanish National Cancer Research Centre (CNIO) leading the Topology and DNA breaks Group, where he is continuing his research line on how DNA topology shapes the organization and dynamics of the genome, and how an imbalance in these processes can lead to the appearance of pathological DNA breaks that compromise genome stability.

In summary, Felipe Cortés-Ledesma has devoted his scientific career to the study of DNA breaks, and in particular to those related with the topology of the DNA molecule, a field in which he has made seminal contributions. Important achievements that can be highlighted are publications as senior author in top journals, such as Nature and Science, the election as EMBO Young Investigator, and the award of an ERC Consolidator Grant.