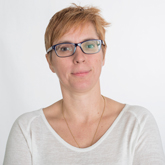 Carmen Blanco Aparicio was Graduated in Biology and Biochemistry from Universidad Autónoma de Barcelona and obtained her PhD in Biology 1998 from Universidad of Girona with 9 months training in MD Anderson Cancer center in Houston (USA). She moved for a postdoctoral stay to Fundación Valenciana de Investigaciones Biomédicas in Valencia where she worked 2 years at Research Group lead by professor R. Pulido. The main areas of research during this period were new therapeutic approaches for pancreatic cancer and the regulation of MAPkinases by phosphates in cancer.

After that, she joined the Programme of Experimental Therapeutics (ETP) at the Spanish National Cancer Research Centre (CNIO). From 2001/8 she worked as Staff Scientist at the Assay Development Group in ETP: first she participated in a 3 years collaboration project with the pharmaceutical company Eli Lilly for the development of biological tools for drug discovery, then she participated in the CNIO Drug Discovery Programme through the development of cellular assays for the screening of chemical libraries and the generation of animal models for target validation, she also developed High Content Screening cellular platforms and participated in the generation of a panel of primary tumor cell lines to perform pharmacogenomic studies that help to envisage future clinical responses.

In 2008 she was promoted as Project Leader for PIM Kinase early drug discovery project. In 2010 she was named as Head of the Molecular Pharmacology section and in 2012 she took over responsibility over the Biology Section of ETP.

As the result of her leadership role in ETP-Biology, she has contributed to the delivery of advanced candidates with demonstrated in vivo Proof-of-Concept results and optimized profiles in several eDD projects based on novel oncology targets. In March 2013 PIM and PIM/PI3K molecules were licensed to Inflection Biosciences, an Irish Biotehc biotech company dedicated to take advanced preclinical candidates and invest into their clinical development. In December 2013 the multinational pharmaceutical company Merck Serono acquired the rights over the ATR inhibitors designed and optimized by ETP scientist within a collaborative project together with the laboratory led by O. Fernández-Capetillo.

Since 2012, she has been supervising eDD projects at ETP covering from biochemical or cellular screen, target deconvolution from phenotypic screening, and Hit to lead phases including molecular and animal pharmacology characterization of the new molecules.