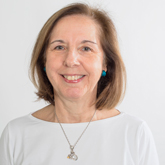 Sagrario Ortega was born in Toledo (Spain). She obtained her PhD in Biochemistry in 1987 at the Universidad Complutense de Madrid for her thesis work on the molecular mechanism of initiation of prokaryotic DNA replication at the Centro de Investigaciones Biológicas (CSIC), Madrid.

From 1987 to 1990 she was a Fulbright Scholar at Merck Sharp and Dohme Research Laboratories, Rahway (USA), during which time she studied fibroblast growth factors (FGFs), their function in the control of cell proliferation and their therapeutic applications.

In 1992 she joined the New York University (NYU) Medical Center (USA) as a Research Associate where she studied the in vivo function of members of the FGF family through the generation of knockout mice. In 1998 she codirected the Gene Targeting and ES cell Culture Facility with A. Joyner at NYU Medical Center.

In September 1998 she joined the CNIO as a Staff Scientist in Mariano Barbacid´s lab to study cell cycle control in mammals generating and characterising gene targeted mice for the cyclin-dependent kinases (Cdks) and their regulators.

Since 2002 she has been Head of the Transgenic Mice Unit at the CNIO.