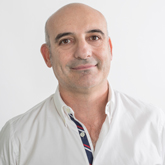 Joaquin Martinez-Lopez was born in Granada in 1967. He received his MD from the University of Granada, in 1991 and his PhD from the Universidad Complutense de Madrid in 2002. He also obtained a Master Degree in direction and management of hospitals at the UNED in 2006. During the year 2010, he completed a Postdoctoral Research Fellowship within the Cellular Therapy Program at the Princess Margaret Hospital, University of Toronto, Canada.

Joaquin specialised in Haematology at the Hospital Universitario 12 de Octubre, Madrid, obtaining his license in 1997. Then, he completed his training in molecular diagnosis in haematology at Complutense University as research fellow. From 1999 and during the completion of his PhD, Dr Martínez López assumed a staff physician position at the Hematology Department, Hospital Universitario 12 de Octubre, Madrid, Spain. In 2009, he became Head of Diagnosis at the pre-clinical and clinical Molecular Biology Research Unit within the Haematology Section. In 2016, he became in head of Hematology Department at H 12 de Octubre, his current position. Since 2005, Dr Martínez López has been Associate Professor at the Faculty of Medicine, Universidad Complutense de Madrid, Spain; in 2018 he became professor at the same University and in 2021 is has been accredited as Full professor. In 2015, he was as invited professor at Harvard University (Dana Farber Institute). In 2019 he became visiting professor at the University of California San Francisco.

Dr Martínez López directs the optimization of new molecular diagnostic and prognostic tests for different molecular alterations observed in haematological malignancies looking for new biomarker It is actively involved in the development of data bases and storing of samples in the biobank, which currently stores over 5000 samples. Its main research focus is the search and validation of new prognostic markers, diagnosis and predictors of treatment response; search of new therapeutic targets and advances immunotherapies in selected cells (stem cells, mesenchymal cells…); evaluation of drugs directed to this targets at both pre-clinical and clinical levels. In the last 10 years he has participated in more than 250 articles in international peer-reviewed journals. From 2006 he has received 5 awards to best research article of the year, from the Hospital 12 de Octubre, the MUTUA research foundation and the Font Foundation. He has presented more than 500 abstracts at scientific meetings. He had three patents two of them are international.

He joined the CNIO in November of 2014 to lead the Haematological Malignancies Research Unit CNIO-H12O.