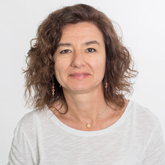 Jasminka Boskovic was born in Montenegro (former Yugoslavia). She graduated in the University of Zagreb (Croatia) in 1992, and then moved in 1993 to Madrid for her Ph.D. studies. In 1998, Jasminka Boskovic obtained her Ph.D. degree in Molecular Biology (Autonomous University of Madrid) at the Molecular Biology Centre “Severo Ochoa” (CBMSO) in Madrid under the supervision of Professor Antonio Jiménez. At the CBMSO she participated in the sequencing of first eukaryotic organism and performed genetic studies of yeast Saccharomyces cerevisiae. These works were published in Nature, Gene and Yeast. In 1999 Boskovic moved to National Centre for Biotechnology (CNB) in Madrid as a postdoctoral fellow where she was trained on single particle electron microscopy. Under supervision of Professor Jose Maria Valpuesta she studied structural and mechanistic aspects of chaperonins (EMBO Rep. 2007; Structure. 2007; EMBO J. 2002). In 2002 she moved to the Centre for Biological Research (CIB) in Madrid where, as a part of the Electron Microscopy Unit, she was in charge of electron microscopy studies of diverse samples in collaboration with different groups, mainly within the Institute (Biophys J. 2008; J Biol Chem. 2006; J Virol. 2005; Langmuir. 2005; EMBO J.2003; EMBO Rep. 2003). In 2005 Boskovic obtained a Ramón y Cajal research contract from the Spanish Government and joined the CNIO’s Macromolecular Crystallography Group where she used single particle electron microscopy to address the molecular architecture and function of protein complexes involved in DNA replication (Cell Cycle. 2016; Nucleic Acids Res. 2012; EMBO Rep. 2007). There she co-directed three doctoral thesis and collaborated with other groups in CNIO (Proc Natl Acad Sci U S A. 2014). In 2014, after reorganization in CNIO, Boskovic was appointed as Head of the Electron Microscopy Unit. Since then she is giving support to CNIO’s Research Groups (Structure. 2017; J Biol Chem. 2016 ; J Struct Biol. 2015) and collaborating with a wider research community (Nucleic Acids Res. 2016; Proc Natl Acad Sci U S A. 2016) on structural and functional studies of protein and protein complexes using transmission electron microscopy.