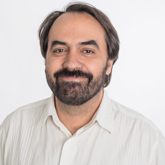 Diego Megías was born in Madrid in 1974 and graduated in Biological Sciences from the Universidad Autónoma de Madrid (UAM) in 1998.

In 2003 Diego joined the CNIO as Senior Technician for the Confocal Microscopy Unit where he played a critical role in developing a number of new microscopy technologies that have since been used by different Groups at the CNIO. He has also carried out research projects and collaborated with other groups leading to the publication of 12 articles in prestigious international scientific journals.

Diego was appointed Head of the Confocal Microscopy Unit in 2009. One of his main objectives for the future is the application of microscopy technologies to the biology of tumour cell invasion using live cell imaging and analytical microscopy techniques.