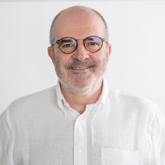 More than ten years of his career were spent in the Centro de Investigaciones de Anomalías Congénitas (CIAC) of Instituto de Salud Carlos III. He worked on the cytogenetic and genetic basis of developmental defects. In 1998 he joined the Genetics Department at the Universidad Autónoma de Madrid, supervised by J. Fernández-Piqueras to study on the molecular characterization of mice thymic lymphomas. During 1999-2000 he moved to the Genetics Service of the Fundación “Jiménez Díaz” (Madrid) to work on the cytogenetic study of haematological neoplasias and to work on the familial and hereditary cancer syndrome field.

In May 2000 he went to the CNIO as Researcher in the Genetics Department. Since September 2005 to December 2006 was Head of the Familial Cancer Unit.

He is working on the clinical and genetic characterization of cancer predisposition syndromes and on colorectal cancer syndromes such as Lynch or Familial Adenomatous Polyposis, in particular.

He has been member of Advisory Committee of the Hereditary Cancer Section of the Sociedad Española de Oncología Médica (SEOM) and Professor of Human Genetics at the Universidad Francisco de Victoria in Madrid. He is currently the coordinator of the Hereditary Cancer Comission of the Asociación Española de Genética Humana (AEGH) and actively works on organizational and educational aspects of familial cancer in our country.