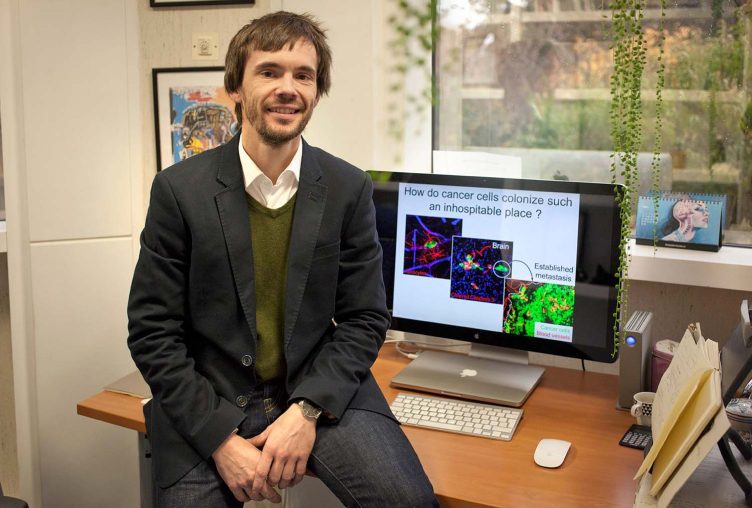 More than 60% of patients with brain metastasis relapse in the first year after surgery
The project aims to convert these surgeries into curative ones by directly attacking the biology of the cells that cause tumours to reappear
Valiente’s team, the first in Spain dedicated exclusively to the research of brain metastases, will be given 250,000 euros and a year to complete the project
It is among the first grants that US-based The Mark Foundation for Cancer Research, which provides funding for transformational and high-risk projects, has provided funding for a research project in Spain

It is estimated that around a quarter of cancer patients are at risk of developing brain metastases, and more than half of these metastatic patients will relapse within the first year after surgery. These data highlight an “increasingly serious problem for our health system and hospitals, as there is a growing number of patients with brain metastases […] for whom most of the time there are no curative treatments,” says Manuel Valiente, head of the Brain Metastasis Group at the Spanish National Cancer Research Centre (CNIO).

Thanks to an ASPIRE Award from US-based philanthropic organization The Mark Foundation for Cancer Research, Valiente and his team will seek to convert surgeries into permanent and curative solutions that prevent relapses caused by brain metastasis. To do this, they will search for and investigate the cells that rebuild tumours after surgery, about which “to date we know nothing because there was no way to study them.” This is among the first research projects this Foundation is funding in Spain, with 250,000 euros for one year.

The ‘seeds’ of relapse

Brain tumours often recur after surgery due to the impossibility to eliminate all tumour cells in the operating theatre. Little, if anything, is known about how these cells, which Valiente calls “the seeds of relapse”, regenerate the tumour, where they are located, their genetic information, or how they interact with the surrounding environment.

“We suspect that they are very special and resistant cells, as they are capable of surviving in an adverse environment after neurosurgery where inflammation is present, and of adapting and regenerating the tumour,” explains Valiente, who foresees that the biological properties of these cells are entirely different from those we already know.

This ambitious project is made possible using a unique experimental model developed in recent years by Valiente’s laboratory at the CNIO, which allows monitoring non-invasively those cells left behind after an otherwise successful neurosurgery until they fully reconstruct the metastasis. This animal model will provide data on the biology of the cells that re-grow the tumour, which will allow the generation of the first molecular map of the process of relapse and, in a second phase, the development of a pharmacological intervention to prevent it from happening.

A generous and risky project

The project is “very generous in terms of funding but also very ambitious and risky, as we only have one year to meet the goal.” But Valiente is confident that they are well positioned to succeed: “There are very few laboratories in the world that use the same approaches as we do here.” In addition to the experimental model, the team can take advantage of MetPlatform, a drug platform developed by themselves, which makes possible the analysis of hundreds of compounds simultaneously in this metastasis scenario.

In parallel, the researchers will validate their findings in patient samples with the help of RENACER, a national network of hospitals promoted and managed by Valiente and Eva Ortega-Paíno, scientific director of the CNIO Biobank, which was launched this year to support research into brain metastasis.

In the words of the researcher, “this project is a fundamental part of our research programme launched in 2015 at the CNIO, through which we aim to generate new options that, through clinical collaborations, will make a significant contribution to transforming the poor prognosis of brain metastasis.”

Ryan Schoenfeld, PhD, Mark Foundation Chief Scientific Officer and interim CEO, said, “As The Mark Foundation increases our financial commitment to tackling the greatest challenges in cancer, we are excited to expand our global outreach in pursuing outstanding scientific research projects. We welcome Manuel Valiente and the Spanish National Cancer Research Centre into our growing global family of funded investigators.”

Manuel Valiente (Zaragoza, 1980) is a graduate in veterinary medicine (University of Zaragoza, 2003). His interest in the central nervous system led him to obtain a PhD in Neurosciences (Institute of Neurosciences, Alicante, 2009) working in the laboratory of Oscar Marín. To expand his scientific knowledge of the central nervous system, Manuel joined the laboratory of Joan Massagué (Memorial Sloan Kettering Cancer Center, New York, 2010), where he began his research into the biology of brain metastasis.

In 2015 Valiente established the Brain Metastasis Group at the CNIO; it was the first group in Spain dedicated exclusively to brain metastasis research.His extensive network of national and international basic and clinical researchers enables this researcher to develop a broad programme to improve the efficacy of existing treatments, to develop new therapies, and to promote research in this field, which has not traditionally been among the priorities in cancer research.

His contributions have been published in high-impact scientific journals such as Nature, Cell, Nature Medicine and Nature Cell Biology. Valiente has received major accolades, such as his appointment in 2018 as EMBO Young Investigator (EMBO YIP) and being awarded in 2019 one of the most important grants in Europe, the Consolidator Grant from the European Research Council (ERC), to search for brains immune to metastasis. He is a member of the Scientific Committees of the European Association of Neuro-Oncology (EANO) and the American Association for Cancer Research (AACR) and a reviewer of national and international research agencies.

About The Mark Foundation for Cancer Research

The Mark Foundation for Cancer Research actively partners with scientists to accelerate research that will transform the prevention, diagnosis, and treatment of cancer. The Mark Foundation fulfills its mission by supporting groundbreaking science carried out by individual investigators, multi-disciplinary teams, and inter-institutional collaborations in the United States, Europe, and across the globe. Recognizing the obstacles that prevent scientific advances from improving patient outcomes, The Mark Foundation maintains a nimble, high-impact approach to funding cancer research that bridges the gap between bench and bedside through grants and early-stage venture investments.

Since 2017, The Mark Foundation has awarded more than $125 million in grants to enable innovative basic, translational, and clinical cancer research, including drug discovery. The Mark Foundation also has a robust and growing portfolio of investments in oncology companies developing novel therapeutics and diagnostics. Through its research and venture arms, The Mark Foundation supports projects throughout their life cycle to ensure their highest chance of success in impacting the lives of patients with breakthroughs in cancer care.