Nature Medicine. CNIO researchers find a potential therapy for the most aggressive type of lung cancer in preclinical models

The specific combination of the drugs dasatinib and demcizumab impairs the growth of KRAS-driven lung tumours, the most aggressive sub-type and with the lowest survival rates

The research was conducted on mouse models and samples of human tumours. The experts are confident they can soon start clinical trials which will make it possible to transfer the discoveries to cancer patients

This combination of drugs could represent a new therapy directed against these tumours, which are currently treated with the standard cisplatin-based therapy 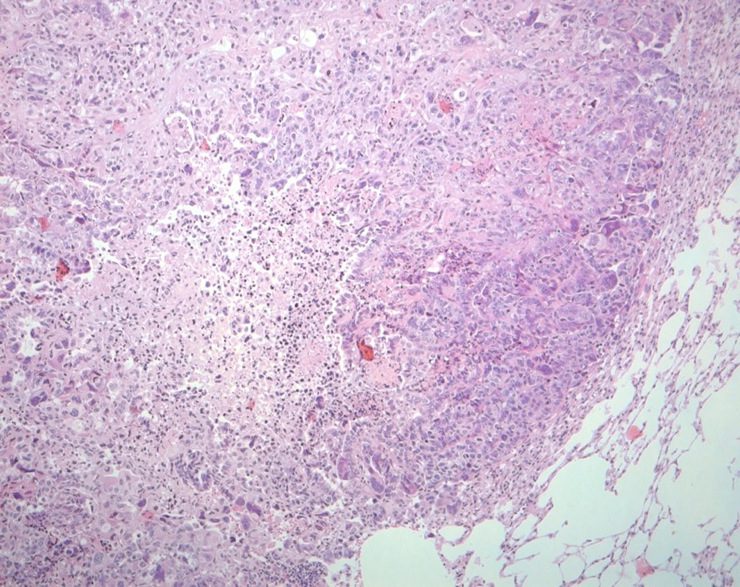 Lung cancer is one of the most prevalent types of cancer, with more than 20,000 new cases diagnosed each year in Spain. Lung adenocarcinomas carrying oncogenic KRAS, the engine driving these tumours in 30% of cases, constitute the most aggressive sub-type because, unlike other types of lung cancer, there are no targeted therapies beyond the standard cisplatin-based treatment.

Researchers of the Experimental Oncology Group at the Spanish National Cancer Research Centre (CNIO), headed by Mariano Barbacid, director of the Group, and the researcher David Santamaría, will be publishing a paper in the prestigious journal Nature Medicine this week explaining how the combination of dasatinib — DDR1 protein inhibitor — and demcizumab — a Notch pathway inhibitor antibody — specifically and effectively reduces lung adenocarcinomas and improves prognosis and survival rates substantially. Once the preclinical studies have been completed, “the next step in this research would be the clinical trials to validate the combination of these drugs as the first therapy directed against these aggressive tumours,” says Chiara Ambrogio, first author of the paper.

One of the most important barriers in the study of lung adenocarcinomas is their great heterogeneity when they reach advanced stages: tumour cells evolve over time, learn to adapt to the environment in order to grow and survive and form sub-populations within the same tumour. This heterogeneity explains why many patients stop responding to cancer treatments.

“Classically, tumours have been studied at advanced stages, but we were interested in studying the initial stages of tumour formation. We followed this approach to avoid the heterogeneity issue and try to identify new essential mechanisms that sustain tumour development with potential therapeutic uses,” says Ambrogio.

The researchers analysed the gene signature of these tumours through large-scale gene analysis techniques. “We discovered that these tumours display high levels of activity of the DDR1 gene, so we decided to validate its inhibition as a potential therapeutic strategy for this type of tumour.”

Recent data indicate that combined therapies using two or more drugs can prevent, or at least delay, relapses in the case of cancer patients; thus, the experts simultaneously used dasatinib, which inhibits the DDR1 protein, together with demcizumab, an antiboby inhibiting the Notch pathway that is functionally related to DDR1 in this tumour type.

After five years of research, the experts conclude that the combination of the two drugs has additive effects on tumours, reducing their size, preventing their progression and significantly increasing survival rates. “One of the advantages of the project is that the two drugs employed have already been approved by the regulatory agencies, which will significantly speed-up studies on human patients. The next steps are clinical trials to validate the combination of these drugs as the first targeted therapy for the treatment of these tumours.”

The authors of the paper have used preclinical models of genetically modified mice. In collaboration with the team of Alberto Villanueva in the Catalan Institute of Oncology (ICO), they generated orthotopic mouse models by implanting lung tumours from patients in order to validate the effectiveness of the drugs directly on human samples. The teams of Manuel Serrano and Manuel Hidalgo from the CNIO have also participated in the study.

The project was funded by the European Research Council (ERC), the European Union, the Ministry of Economy and Competitiveness, the Community of Madrid, the AXA Foundation, the Spanish Association Against Cancer (AECC) and the Health Research Foundation (FIS) of the Carlos III Health Institute.