Researchers from the Breast Cancer Clinical Research Unit at the Spanish National Cancer Research Centre (CNIO) have just published an important finding regarding antiangiogenic drugs, one of the most commonly used drug types to treat cancer. In a paper published in Cell Reports they describe a resistance mechanism to these compounds and, more importantly, a way to revert it. Working on mouse models with spontaneous breast and lung cancer, they noted that adding an antidiabetic agent to the antiangiogenic drugs inhibited tumour growth by 92%.

Resistance to antiangiogenic agents is a common problem in epithelial tumours and this is particularly worrying if one takes into account that these are amongst the most commonly-used agents in cancer treatment, since they are used to treat breast, lung, colorectal, ovarian, kidney and liver carcinomas, among others.

Tyrosine Kinase Inhibitors (TKIs) belong to the family of antiangiogenic drugs. Nintedanib -a new TKI that to date offers better results than sorafenib and sunitinib in non-liver and non-kidney cancers- has just been approved by the FDA and EMEA for the treatment of advanced lung cancer. Therefore, according to the authors of this paper, “it is important to define the acquired resistance mechanisms to TKIs,” in order to prolong the time that patients can benefit from these treatments.

CHANGES IN THE CELL METABOLISM

Abnormal blood vessels support tumour development and cause a decrease in oxygen (hypoxia) in these tissues. The lack of oxygen triggers changes in cell metabolism. This is the well-known Warburg effect, by which cancer cells consume up to 20 times more glucose than normal cells, thus overriding the cells’ standard power houses: the mitochondria.

Treatment with TKIs prevents the uncontrolled metabolism of glucose in cancer cells, according to the observations of Miguel Quintela-Fandino, head of the Breast Cancer Clinical Research Unit at the CNIO, and of his team. This treatment, however, which should cause cancer cells to die from starvation, does not always have the desired lethal effect and many tumours acquire resistance. How does this occur? By changing the source of energy and returning to mitochondrial respiration, as explained in this paper.

However, CNIO researchers have found that this adaptive mechanism that tumours use to survive is also an opportunity to attack cancer cells.

AN ANTIDIABETIC AGAINST CANCER

“When one energy source (glycolysis) is limited pharmacologically, tumours become vulnerable to the inhibition of another energy source (mitochondrial metabolism)”, the authors point out in the pages of Cell Reports. So, they tested this hypothesis in mice with breast cancer that were being treated with the TKI nintedanib, and they found that glucose consumption severely dropped in the cancer cells while there was an enrichment of metabolites that result from mitochondrial respiration.

Then, they added a mitochondrial blocker (the antidiabetic phenformin) to the drug regimen and saw how up to 92 % of the tumour growth was inhibited in these mice; especially when phenformin was administered sequentially -instead of simultaneously- to the animals taking the TKIs.

This effect, which they named “metabolic synthetic lethality,” also occurred using drug combinations of other types of TKIs (regorafenib) with mitochondrial inhibitors (ME344). It was also noted that in lung cancer models, this treatment prolonged median overall survival by >40%.

The most interesting aspect about this project is that it can be applied immediately. “Phenformin was removed from the market due to a rare complication caused in diabetic patients. However, the drug is safe in non-diabetic patients”, says Quintela. His group will launch an independent clinical trial within the next six months in which “patients will receive this synergistic combination to study the reversion of resistance to antiangiogenic drugs.”

This research project has been funded by the Spanish Ministry of Health, the Spanish Association against Cancer, the Rosae Foundation, Avon Spain, “La Caixa” Foundation and Boehringer-Ingelheim. 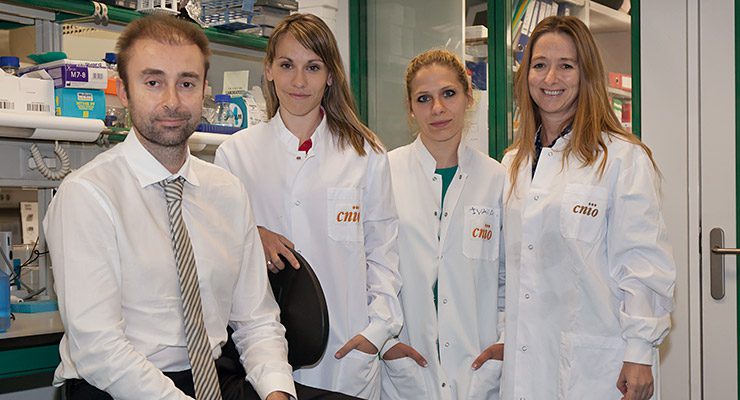