Oscar Fernández-Capetillo's team proves that ATR inhibitors show a positive response in two animal models: one of a type of acute myeloid leukaemia and other of Ewing sarcoma

ATR inhibitors, initially developed at the CNIO, are being evaluated and developed by the multinational pharmaceutical company Merck in order to make them available to cancer patients

Tumours are an accumulation of cells that divide without control, accumulating hundreds of chromosomal alterations and mutations in their DNA. These alterations are triggered in part by a type of damage to the DNA known as replicative stress. To survive in the face of this chaos, tumour cells need the intervention of the damage response protein ATR, known for its role as guardian of genome integrity, to which they become addicted. After eight years of work, Oscar Fernández-Capetillo’s team at the Spanish National Cancer Research Centre (CNIO) has discovered that blocking this protein has antitumour effects in several animal models of cancer, such as an aggressive type of acute myeloid leukaemia and Ewing sarcoma. The results were presented in two papers published in Science Signaling and Oncotarget.

The work performed by Fernández-Capetillo’s team was premised on the assumption that if tumours suffer from high levels of replicative stress, they could be particularly sensitive to treatments with drugs that inhibit ATR, since this protein is responsible for reducing this type of stress. In addition, as healthy cells hardly suffer from this type of stress, the effects on those cells would be limited. The researcher explains it as follows: “If you eliminate a fireman [ATR] in a town where there is no fire [healthy cells] nothing happens, but if you do the same in a town where there is a fire [tumour cells with greater damage to their DNA than healthy cells], the fire will spread and destroy the town”.

In 2011, Fernández-Capetillo’s team proved that it was on the right track. In two independent papers published in the prestigious journal Nature Structural & Molecular Biology they reported, for the first time, that blocking ATR was particularly toxic to tumour cells; a conclusion they reached by using cell cultures and genetic mouse models.

Having made this conceptual breakthrough, “the next step was to focus on finding tumours that presented the greatest replicative stress levels, because we believe that these are the type that will benefit most from this new therapy”, says Fernández-Capetillo.

According to data published by the laboratory itself, tumours with high replicative stress levels tend to have high levels of CHK1 protein -also involved in suppressing replicative stress- to survive in these adverse conditions. “This suggested that one way of identifying tumours with high levels of replicative stress was simply to determine how much CHK1 was present”, explains Fernández-Capetillo. Consequently, after analysing CHK1 levels in a broad panel of human tumours, the researchers identified two types with very large quantities of this protein: Ewing sarcoma and several types of lymphoma and leukaemia, including acute myeloid leukaemia.

In the case of acute myeloid leukaemia, they focused on tumours with mutations affecting the MLL gene, a subtype with a poor prognosis and for which there is currently no curative treatment. Using mouse models that recapitulates this specific type of leukaemia, the researchers observed how the ATR inhibitors increased the survival expectancy of the mice by up to six times. “This is the first time we have seen an effect of such magnitude. To date, using these animal models, we had not seen any compound that achieved this degree of response”, the authors explain. “One difference with current chemotherapy is that ATR inhibitors induce cell death regardless of the presence of p53; therefore, it is also effective in tumours that lack this gene. In addition, we should stress that treatments involving ATR inhibitors were based solely on the use of these compounds, without any additional combination involving other drugs”.

In the case of Ewing sarcoma, ATR inhibitors showed a very high toxicity level, both on culture plates as in the animal models with tumour grafts. “The response observed is better than that reported for other agents that are currently undergoing clinical testing, suggesting that these compounds are an alternative for the future”.

Fernández-Capetillo’s group, in collaboration with the Experimental Therapeutics Programme headed by Joaquín Pastor, developed at the CNIO the ATR inhibitors used in these research projects. In late 2013, they were licensed to the multinational pharmaceutical company Merck, which is actively working in their clinical development to bring this therapy to patients.

The research has been funded by the Botín Foundation and the Banco Santander through Santander Universities, the European Research Council (ERC), the Spanish Ministry of Economy and Competitiveness and the Howard Hughes Medical Institute. 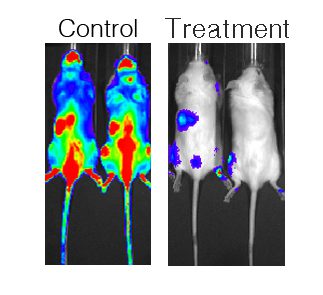