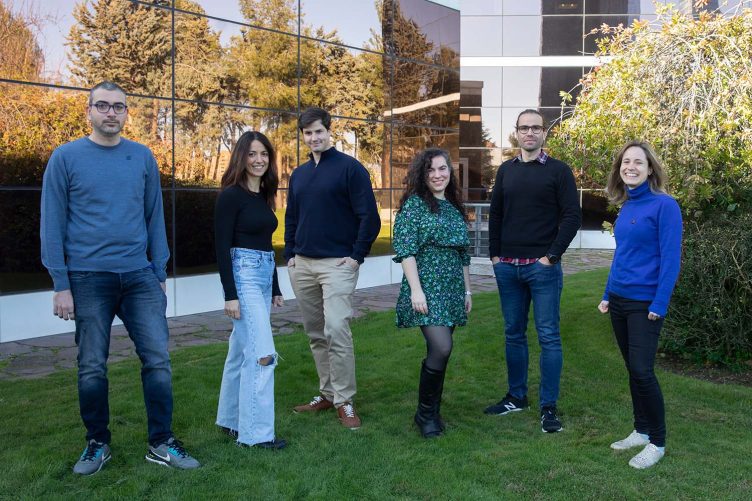 Six of the seven young researchers who have joined the CNIO in 2022 thanks to the CNIO Friends donations. From left to right: Ana María Roncero, Lluís Cordón, Diana Vara, Federico Virga, Albert Harguindey and Yurena Vivas./Laura M. Lombardía. CNIO

With the support of more than 2300 donors – individuals, companies and associations – the CNIO Friends initiative has raised over €2.8 millio in the past seven years
The funds raised through CNIO Friends go to the International Contract Programme, aimed at retaining young talent in Spain and opening up new lines of cancer research in key areas such as metastasis, pancreatic and breast tumours and metabolic disturbances, among others
One of this year’s contracts is being financed by Fundación Domingo Martínez, which has contributed €100,000 for a two-year project aimed at delivering new therapeutic strategies for metastasis

This year, seven young researchers have joined the Spanish National Cancer Research Centre (CNIO), hired with the funds raised  from CNIO Friends’ donations. Thanks to the contributions made by thousands of donors for the CNIO Friends initiative, the number of vacancies in the highly competitive CNIO Friends International Contract Programme continues to grow. In 2022, seven researchers will start their postdoctoral stays at the CNIO, carrying out breakthrough cancer research projects. Since 2016, when the first group of talent was hired, as many as 26 young researchers have worked at the CNIO thanks to this programme.

The raison d’être of the CNIO Friends philanthropic initiative is best summarised in the words of CNIO Scientific Director Maria A. Blasco: “We have become increasingly aware that things depend on us, that each and every one of us is part of the solution. We can help make the world a better place by getting involved.”

The truth is, cancer continues to be one of the main causes of death worldwide. In Spain alone, 270,000 new cases of cancer are expected to be diagnosed in 2022. Prevention and new treatments have led to higher survival rates. However, some types of tumours still pose a challenge, and research is crucial to lower death rates and improve the quality of life of patients.

CNIO Friends was launched in late 2014, in an effort to open cancer research to society and encourage philanthropy as a source of funding for science. In seven years, it has attracted more than 2300 donors, including individuals, companies and associations. Thanks to the generosity and unwavering support of these donors, the CNIO has raised more than €2.8 million for the CNIO Friends International Contract Programme, aimed at retaining young talent in Spain and opening up new lines of cancer research in key areas such as metastasis, childhood cancer, and liver and kidney tumours among others.

One of this year’s contracts will be financed by Fundación Domingo Martínez, which, on the occasion of its 50th anniversary in 2021, signed a donation agreement with the CNIO. The agreement provided fulfilment of one of its foundational purposes: supporting scientific research – in the case of the CNIO, cancer research.

Fundación Domingo Martínez contributed €100,000 for a two-year study (2022-2023) of the tumour microenvironment, that is, the cell environment around a tumour, which is known to play a fundamental role in cancer progression. Tumour cells do not grow in isolation, but they interact with their environment. This kind of interaction is a preliminary step before the tumour cells spread to other tissues and organs. The tumour microenvironment is currently a blooming research field, focusing on the development of therapeutic strategies against metastasis, which accounts for 90 percent of cancer deaths at present.

This is how the young researchers who have joined the CNIO this year thanks to CNIO Friends donations explain what they are doing:

Yurena Vivas – Metabolism and Cell Signalling Group – CNIO Friends-Fundación Domingo Martínez Contract: Dr Vivas is studying the potential role of non-autonomous factors in pancreatic cancer progression. “I am studying whether the microenvironment determines the transformation of normal cells into malignant cells beyond the effect of mutations or in combination with them in pancreatic carcinoma,” she explains.

Laura Nogués – Microenvironment and Metastasis Group: Dr Nogues is analysing the role of the NGFR small-molecule inhibitor (THX-B) as anti-metastatic therapy in melanoma, alone or in combination with the mechanisms underlying these events. “The goal of my research is to find new targets to block melanoma metastasis and prevent the growth of therapy-resistant tumours,” she points out.

Lluís Cordón – Brain Metastasis Group: Dr Cordón studies the development of brain metastasis using brain organoid technology – artificially grown, miniature organs resembling the brain – to design effective therapeutic strategies. “Pharmacological approaches to various types of cancer are extending life expectancy in patients, while increasing the risk of brain metastasis. This is a serious clinical issue in the absence of effective therapies. My research goal is to prevent cancer cells from controlling the brain’s defence mechanisms to their own benefit,” he remarks.

Albert Harguindey – Growth Factors, Nutrients and Cancer Group: Dr Harguindey is working to understand the structural basis for the role of the URI (unconventional prefoldin RPB5 interactor) complex in cancer and suggest novel therapeutic strategies by disrupting the protein complex’s interactions. “I want to elucidate the 3D structure and provide an atomic model of the URI complex,” he comments.

Diana Vara – Cell Division and Cancer Group: Dr Vara is working on new therapeutic targets to prevent and treat metabolic disturbances, given their implications for cancer development and for other diseases of the Western world, and to improve the lives of patients. “I am analysing how MASTL-PP2A/B55, a signalling pathway involved in mitosis, regulates metabolism,” she points out.

Federico Virga – Experimental Oncology Group: Dr Virga is exploring how to improve treatment efficacy in pancreatic and lung cancer – two of the most aggressive and lethal types of cancer. “My research project focuses on increased antitumor response of the immune system in pancreatic and lung tumours induced by KRAS oncogenes,” he describes.

The Spanish National Cancer Research Centre (CNIO) is a Spain-based centre for the research, diagnosis and treatment of cancer whose Director is scientist Maria A. Blasco. In 2021, the CNIO published 254 scientific papers, 52 of them in journals with an impact factor (IF) of 10-15 and 43 in journals with an IF of 45 or greater. According to the 2021 edition of the Nature Index, the CNIO stands second among European institutions specialising in cancer research and eighth at the global level.