In the future, genetic tests will include all the variants which play a role in the risk of developing cancer; this data will help to create personalised patient profiles

The study, led by CNIO scientists, has been published today in PLOS Genetics; the paper is authored by 200 researchers from 55 research groups

Today we know that women carrying BCRA1 and BCRA2 gene mutations have a 43%–88% risk of developing from breast cancer before the age of 70. Taking critical decisions such as opting for preventive surgery when the risk bracket is so wide is not easy. Spanish National Cancer Research Centre (CNIO) researchers are conducting a study that will contribute towards giving every woman far more precise data about her personal risk of suffering from cancer.

The paper has been authored by 200 researchers from 55 research groups from around the world and describes two new genes that influence the risk of women developing breast and ovarian cancer when they are carriers of BCRA1 and BCRA2 mutations.

According to Ana Osorio, lead author of the study and a researcher in the Human Genetics Group, at CNIO: “The aim is to create a test that includes all known genetic variants that affect the risk of developing cancer, and at what age, in order to be able to compile a personalised profile for each patient.” Osorio and Javier Benitez, the Director of the CNIO’s Human Cancer Genetics Programme, have jointly coordinated the work of all the participants in the study.

The finding is part of an international effort by the scientific community to get a more precise understanding of genomic information. Researchers are trying to identify genes associated with cancer as well as the reasons why the same mutated gene affects different people in different ways.

In the specific case of BRCA1 and BRCA2 genes, malfunctions may be caused by thousands of different mutations. However, the effects of these mutations can depend on other DNA variants found in other genes. These DNA variants may be caused by a single change in a chemical component from the 3 billion that make up the human genome. These single changes, known as SNPs (Single-nucleotide polymorphisms), do not inactivate genes and nor are they pathological in and of themselves, but they can play an important role when high-risk mutations already exist.

Understanding the genome to this degree of detail demands a lot of work. The weight of each risk-modulating element is small, so thousands of samples are needed for the effect to show in the data.

To do the work for the study that has been published, the researchers created a consortium called CIMBA (The Consortium of Investigators of Modifiers of BRCA1/2) in 2006, made up of research groups from around the world. CIMBA, with data from more than 40,000 carriers of BRCA1 and BRCA2 mutations, has the largest number of samples from which mutation interactions with SNPs can be studied.

Up to now, CIMBA has managed to associate more than 25 SNPs with the risk of developing breast or ovarian cancer in carriers of BRCA1/2 mutations. The study led by CNIO researchers adds at least two more to the list.

To find them, the study’s authors worked in two phases: they first analysed samples from 1,787 Spanish and Italian carriers of BRCA1/2 mutations, and managed to identify 36 potentially interesting SNPs; they later investigated their importance in a further 23,463 CIMBA samples. They thus discovered 11 SNPs that indicate risk, especially so in the case of two of them. Their influence is small—the largest risk multiplier is just 1.12—which is to say 12% on the base risk.

As Osorio explains: “The weight of each of these SNPs is very small, but with the 27 already described, the risk might increase or decrease for a woman who is a carrier of mutations.”

KNOWING WHERE TO LOOK

The newly discovered SNPs are in two genes known as NEIL2 and OGG1, and not by chance. The researchers went straight to the place where they found them. This way of working distinguishes this study from others that look for BRCA1/2 risk modulators by brute force: analysing and comparing everything to everything.

What advantages does searching searching with a compass offer? As well as being a more efficient strategy, it has allowed CNIO researchers to validate a hypothesis on how BRCA1/2 work. They also provide clues that might be useful for treatments already being used.

The hypothesis showed them where to look: in the genes of one of the DNA repair pathways. Cells have several ways to repair DNA, and one of them includes the use of BRCA1 and BRCA2 when they are non-mutated. If BRCA1 and BRCA2 do not fulfil their role because they are defective, another repair pathway takes over; if none of these pathways are functional the —cancerous— cell dies. So researchers hypothesised that there may be SNP risk modulators on this alternative repair route.

The hypothesis was correct. NEIL2 and OGG1, the genes that host the two SNPs that show the highest risk of developing cancer, intervene in the initiation of the alternative repair mechanism to BRCA1/2. “They are also basic genes for eliminating toxic waste generated by oxidative stress from cells,” adds Benítez.

The result could also have interesting clinical implications. One of the drugs used against breast cancer that is associated to BRCA1 and BRCA2 mutations —called PARP inhibitors— acts by deactivating the alternative repair pathway. The authors therefore note in the study that: “These discoveries could have implications not only for determining risk but also in terms of treatment for carriers of BRCA1/2 mutations with PARP inhibitors.” 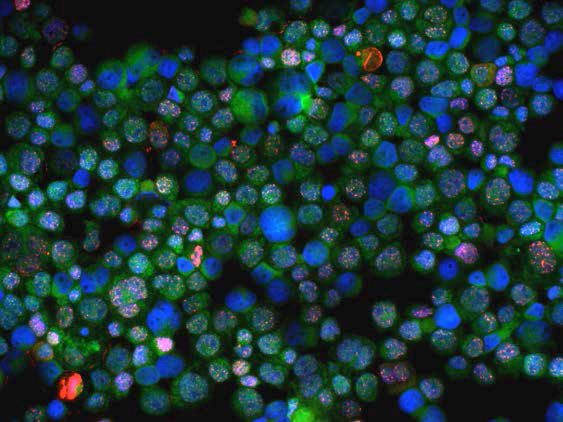 DNA Glycosylases Involved in Base Excision Repair May Be Associated with Cancer Risk in BRCA1 and BRCA2 Mutation Carriers. PLOS Genetics (2014). doi: 10.1371/journal.pgen.1004256